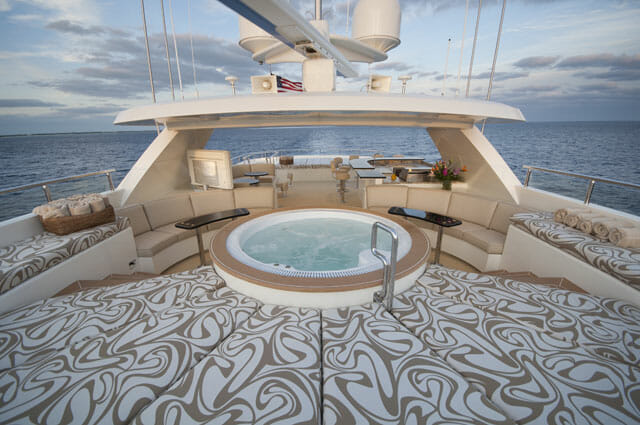 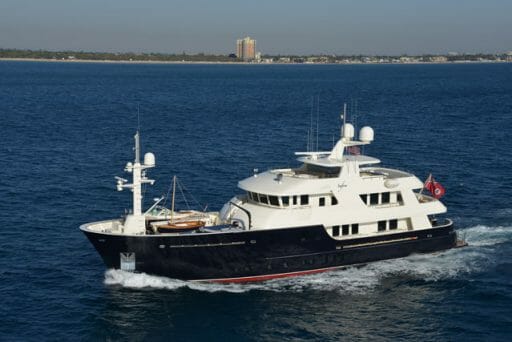 Expedition megayachts conjure images of hard-charging vessels capable of tackling tough conditions yet fully outfitted with luxury accoutrements. To that end, Safira, a 129-footer (39.3-meter) started at Newcastle Shipyards and finished by her owners’ team, fits the bill. Her rugged exterior is complemented by design and engineering from Sparkman & Stephens that allow navigation in ice and a reported 8,000-nautical-mile range at 8½ knots. (Top speed is just shy of 13 knots, and cruise speed is 10½ knots.) Inside, Safira shows off Art Deco touches, wall coverings that tempt you to reach out and touch them, and other tones and textures meant to please her owners and charter guests. But more important, Safira does all of this with forest-certified woods (including in her sub-structure) as well as reclaimed woods, low- or no-VOC paints and adhesives, recycled materials for various surfaces, and systems that use less energy and can even run on biodiesel. In short, Safira gives new meaning to leaving a small carbon footprint. 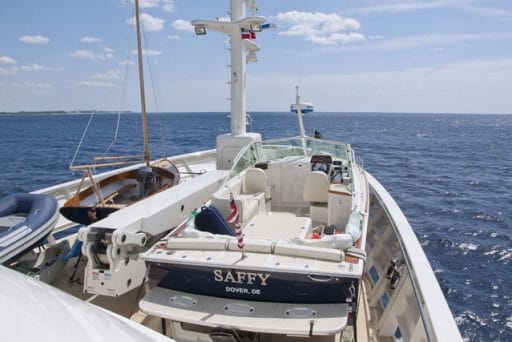 The eco-friendly aspects of Safira even extend to her tenders, which together form quite a nice fleet. Saffy, the motorboat seen to starboard, is a custom, 25-foot (7.6-meter) Hunt Harrier powered by a Yamaha stern drive burning just nine gallons per hour at 30 knots. Ten people can be toted aboard. For the ultimate in “green” power, however, the megayacht has a beautiful Herreshoff replica tucked just forward of the RIB, to port of the tender crane. She measures 12’5″ (3.8 meters) and is even more beautiful in person. Other toys stowed elsewhere include paddle boards, kayaks, and water skis. 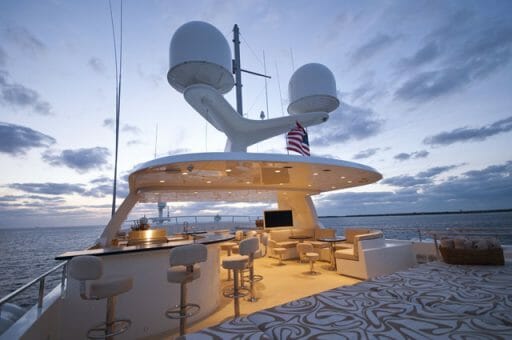 All of the fabrics selected for Safira, including those covering the expanse of sunpads just visible here on the sundeck, are natural and organic. All decks are covered with Esthec, the well-known composite material that looks remarkably like teak and requires far less maintenance. Equally noteworthy, the scrap remaining from the construction of her steel hull and aluminum superstructure, wiring runs, and more have all been recycled. It was important to the owners, who previously owned two megayachts and who have business interests in LEED-certified properties on land. 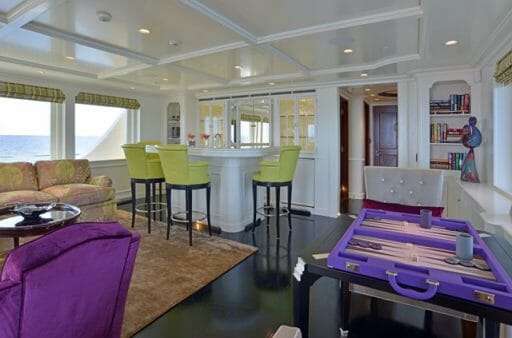 If you think eco-friendly fabrics mean a bland decor, take a good, long look at Safira’s skylounge. How can a smile not pull at the ends of your mouth with the bright punches of color here? Further to that point, when the megayacht made her boat-show debut at June’s Newport Charter Show in Newport, Rhode Island, her relief captain, Del Schmidt, relayed comments from broker after broker, many of whom said they could see their clients spending a lot of time in this room. The deep-tone soles, by the way, are made of ebonized oak, and the area rug is not only organic, but also flame-retardant, in keeping with fire and safety regulations. The megayacht is classed to ABS and meets the MCA Code. 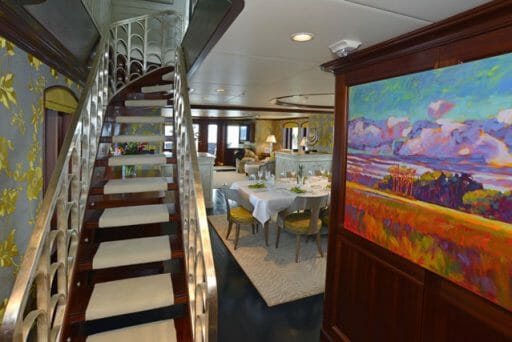 Clearly, the owners wanted a rich, even rococco, ambiance aboard their megayacht. Here is perhaps the best example of how interior designer Michael David & Associates incorporated multiple tones and textures, along with Art Deco touches. The design of the stairway railings is decidedly Art Deco, and you can just spy some of the wall coverings that adorn most of the interior relaxation areas aboard Safira, an unusual choice for a megayacht. In the background are the dining area and, farther aft, the saloon. 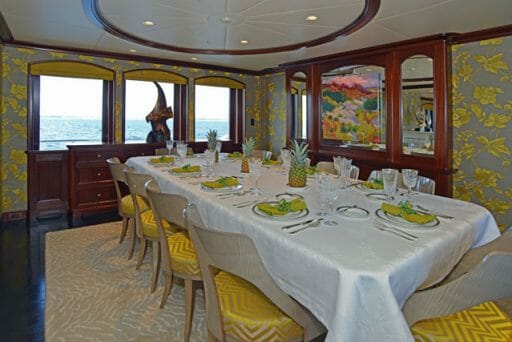 Here’s a much better representation of how silk wall coverings are used aboard Safira. Though they are tough to see given the daylight, the overhead lights are LEDs. Touted for their lower energy consumption, LEDs are found throughout Safira’s interior and exterior. They’re also motion-sensor-activated, a smart move. This way, whenever a room is unoccupied, the lights remain off, and therefore less electricity needs to be used. 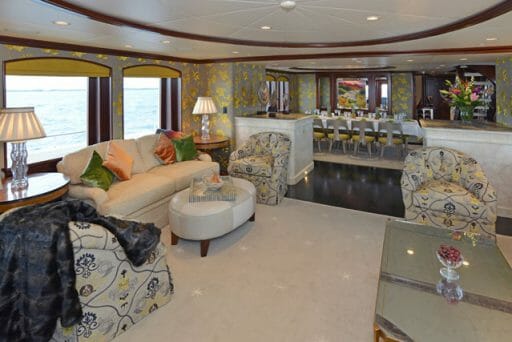 The saloon furnishings look as if they could have stepped out from a historic home, but they were actually custom created for Safira, commissioned by her interior designer. Also custom created is the faux-ivory cabinetry just forward and to each side, serving as a separator between the saloon and dining area. While some yacht saloons rarely get used, since the owners and guests spend most of their waking hours out on deck, remember that Safira is meant for adventures. Therefore, some long passages may be in her future, and therefore the saloon will serve as far more than a showpiece. 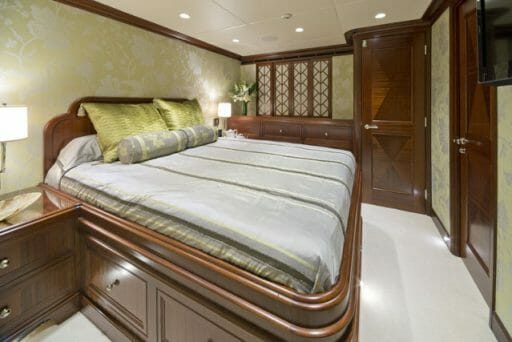 The guest accommodations, as you would expect, are below decks. The three doubles and two twins are each outfitted with different color schemes, which extend to the silk wall coverings. While more wood paneling appears down here than above deck, it is all forest-certified sapele. 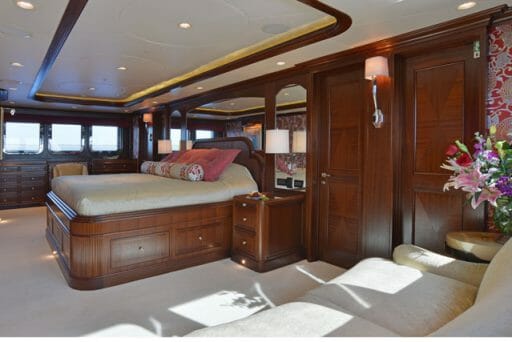 Even the megayacht’s master stateroom is below decks, making the most of the 28-foot (8.5-meter) beam. Just visible to starboard, and reflected in the mirrors behind the bed, is the silk wall covering chosen solely for this space, a mix of bold red and silver. If you’re wondering why Safira bucks the modern trend to position a megayacht’s master suite forward on the main deck, or even one deck above, the answer is simple. The owners felt that wouldn’t necessarily be the wisest use of deck space, since they don’t linger in their cabin. 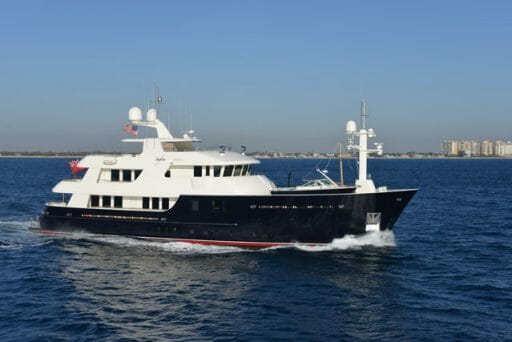 There’s a lot more to Safira that won’t be seen by the average guest, such as the glass crusher in the crew area that can crunch bottles as large as Magnums; the water-filtration system that can make seltzer and thereby ensure no bottled water ever needs come aboard; and azipods linked to the 660-hp Caterpillars that result in about a 20-percent reduction in fuel burn. Even the galley and crew areas have Marmoleum flooring, a true linoleum product, which means it’s made from linseed oil and other natural materials. It’s also not the dull, drab stuff of your childhood: think bold colors and decades-long durability. It’s further recyclable.

As stated above, Safira is available for charter, part of the central fleet of Burgess. She’s wasting no time in exploring unusual regions, in keeping with her expedition heritage: Greenland is on her itinerary this month and next month. She’s available for select weeks for $140,000 per week. Come wintertime, Safira (which is also for sale, with Burgess as central agent, for $32 million), will charter in the Caribbean.

Fitting that a “green” yacht is heading to Greenland, no?