You are here: Home / Builders / Echo Yachts, New Builder Down Under 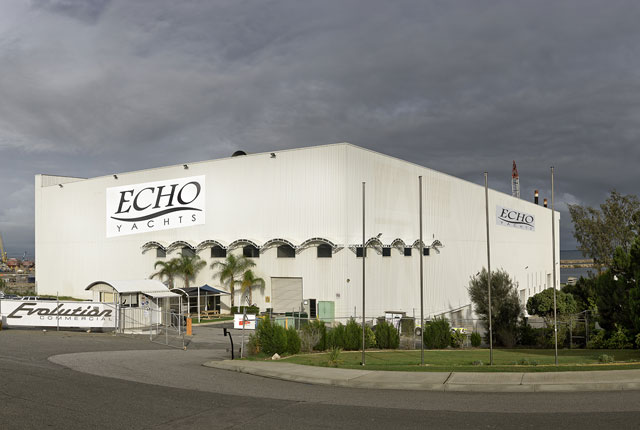 Australia has a new megayacht builder, Echo Yachts, which plans to build the country’s largest-ever project.

Located in Henderson in Western Australia, Echo Yachts was established by a Singaporean family. The family will own both a megayacht and a shadow boat, with the latter already under construction. Mark Stothard, Echo Yachts’ director, says the general arrangements are still being finalized. However, the LOAs and hull forms are set.

The megayacht will measure 275’6” (84 meters), making her the largest Australian-built pleasure vessel. Of particular note, she’ll be a trimaran, the largest of this kind anywhere. Given the triple hulls, the yacht will have a commodious 65’6” (20-meter) beam. The design team working with Echo Yachts on this project also has Australian ties. Styling and interior design are by Sam Sorgiovanni Designs. Monohull, catamaran, and trimaran specialists One2three Naval Architects is handling engineering.

Meanwhile, the Echo Yachts shadow boat will be 150’9” (46 meters) and a catamaran configuration. New Zealand-based LOMOcean Design is overseeing naval architecture. She’ll carry about a dozen tenders for different purposes. A 39-foot (12-meter) tender, for example, will have 3D sonar for finding sunken wrecks and searching seabeds.

Since the catamaran has already started construction, Echo Yachts says she’ll be ready by late next year. The trimaran will take three years to build.

On a related note, Echo Yachts is a little more than a mile (nearly 2 kilometers) from another Australian megayacht builder, Silver Yachts. Stothard says the two companies have already been sharing resources and will continue doing so. In addition, Stothard says, Echo Yachts expects to employ about 250 people directly by mid-2015.