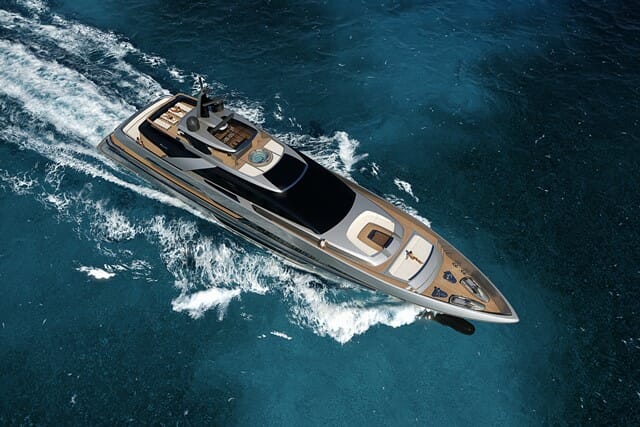 The 122 Mythos won’t remain the biggest Riva for long. Today, the Italian builder announced a limited-edition, fully custom range. The range starts with the Riva 50-meter (164-footer), already in build for a client.

Aimed at Riva owners and enthusiasts, the Riva custom range will feature steel hulls and aluminum superstructures. Construction is taking place at Riva’s sister company, CRN. At a press conference during the Monaco Yacht Show, representatives from Riva and the Ferretti Group, its parent company, each underscored that the fully custom range is a continuation of work initiated by Riva’s founder, Carlo Riva. In the 1960s and 1970s, Carlo Riva partnered with Dutch shipyards to bring his Caravelle and Atlantic motoryacht series to fruition. From 1970 to 1978, CRN built eight additional megayachts that were part of other series. Mauro Micheli, co-founder of Officina Italiana Design, which pens also Rivas, says that the project “takes the baton from what Carlo Riva wanted.”

Alberto Galassi, the CEO of the Ferretti Group, declined to elaborate on how limited the custom range will be. However, megayachts to 100 meters (328 feet) are planned, according to Riva’s press office. (On a related note, CRN currently can build to 295 feet, or 90 meters, so expansion would need to take place for the largest LOA.) The press office also revealed that the next fully custom megayacht to start construction will be a Riva 68-meter (223-footer).

The Riva 50-meter, and the larger megayachts, will be full displacement. Micheli says they’ll all have Riva’s DNA, in the form of some styling features, yet be individual designs on their own. The renderings here give glimpses of the Riva 50-meter, which certainly doesn’t look like an Aquarama, or Iseo, or even the 122 Mythos. 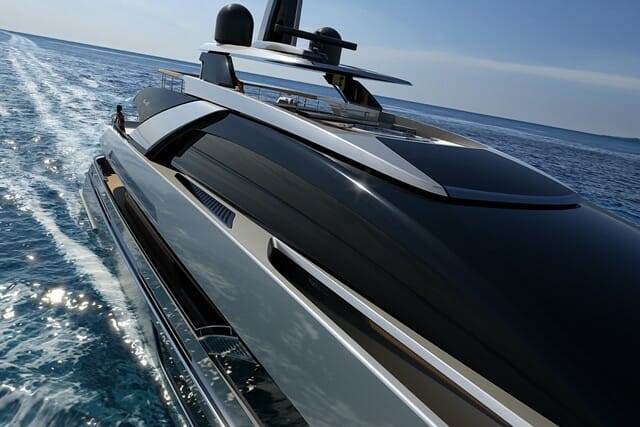 Inside, the owner is working with Officina Italiana Design. Future buyers of the same model and the larger megayachts will be invited to as well. The interior layout for the Riva 50-meter is still being finalized. Riva does, however, have a few suggested layouts for the client’s consideration. The full-beam (29’5”, or 9-meter) master suite is on the main deck in all of them, for example, and can be built with fold-down balconies on each side. Below decks, four guest staterooms can accommodate 10 people. Alternately, one of the cabins can instead be a spa or a gym. The sundeck can have a variety of loose furnishings and a hot tub surrounded by sunpads. Other alfresco areas are suitable for dining, relaxing, or both. Of course, the builder also recommends that the Riva 50-meter be equipped with a beach club, featuring a bar and living area. That same beach club can have fold-down hatches to each side, not just at the transom. And, just as CRN’s J’ade featured a float-in tender garage so, too, can the Riva 50-meter.

The four-deck megayacht will be managed by nine crew and a captain. The crew will have a dedicated stairway leading up to the main-deck galley and farther up to the wheelhouse. Speaking of the wheelhouse, the captain’s cabin will be adjacent.

The Riva 50-meter can be powered by either Caterpillar or MAN diesel engines. Either package should permit a 15-knot top end. At 11 knots, the yacht should see a 3,800-nautical-mile range. Zero-speed stabilizers will be installed as well.

During the press conference, Alberto Galassi indicated that the Riva 50-meter should be completed in 24 to 26 months.