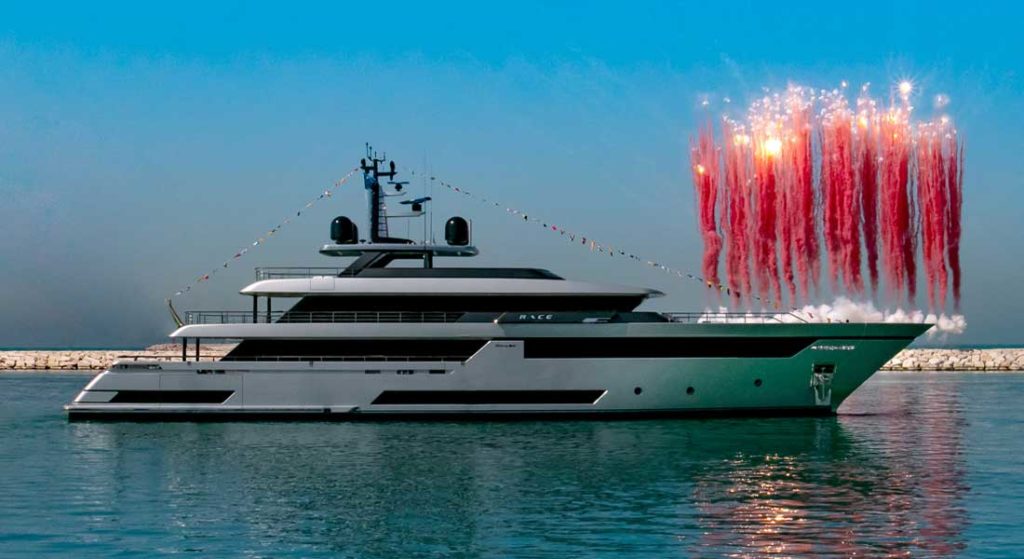 The owner of Race and the late Carlo Riva, the founder of Riva, had something in common. Each wanted to see Riva build a superyacht. Unfortunately, Carlo Riva passed away before the first Riva Superyachts Division project could reach completion. Nonetheless, the owner of Race is responsible for making the dream come true. Hull number one of the Riva 50 mt series launched to great fanfare yesterday.

Thankfully, Carlo Riva was still around for the megayacht’s hull transfer last year in Ancona, Italy. In fact, coincidentally, the transfer took place on his 95th birthday. Just a few years prior, he said, “I’d like to try and cruise on her,” when Riva’s management team showed him the first renderings.

The 160’8” (49-meter) Race, with a 29’5” (9-meter) beam, is further the first Riva featuring metal construction. Despite her size and composition being so different than the rest of the brand’s lineup, though, she bears family styling. Like those smaller sisters, the megayacht bears styling from Officina Italiana Design, with engineering from the Ferretti Group Product Strategy Committee.

Inside, of course, Race is all her owner’s boat. With accommodations for an owner’s party of 12, she has six staterooms. Interestingly, a VIP cabin joins the master suite on the main deck, an unusual layout. The remaining four guest staterooms, however, go in the customary location below decks. Eight crew are housed below as well, while the captain’s cabin is aft of the wheelhouse.

Riva hasn’t disclosed the decor details for Race, but expect her to have a beach club doubling as a tender garage.

Race still has to conduct sea trials. She should see a top speed of 15 knots with 1,360-hp MTUs. Once delivered, she’ll be as adept at reaching shallow waters as she’ll be at accessing deep ones, given a draft of 8’7” (2.65 meters).

Race will attend two boat shows this year, where you can see her yourself. The first is the Venice Boat Show in June, while the second is the Monaco Yacht Show in September.