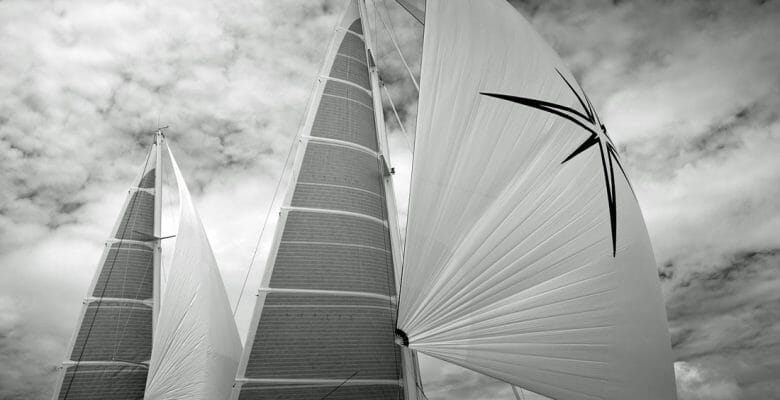 Not even a shortened course due to weather could dampen the spirits of the eight sailing superyachts on race day one of the New Zealand Millennium Cup. Perennial competitor Janice of Wyoming emerged the victor. If fellow racers had any doubts as to her intentions, the huge cowboy on her spinnaker let them know she’s always ready to ride.

Indeed: Janice of Wyoming all but sailed straight through the committee boat shortly after leaping over the starting line. The New Zealand Millennium Cup course started at the mouth of the Bay of Islands. Competitors headed out to Roberton Island and Ninepin Island before returning to the Bay. The scenery was stunning, but the sailors’ eyes were on the prize. Janice of Wyoming even caught up to and passed the sub-30-meter Pacific Division sailing superyachts. (The bigger yachts like her are in the Millennium Cup Division.)

Silvertip and Kealoha, also in the Millennium Cup Division, were not ones to be left far behind. Silvertip made up quite a bit of ground on the approach to Ninepin Island. Kealoha actually had the lead over her competitors heading back to the Bay. But, Janice of Wyoming stormed across the finish line first, with Kealoha taking second and Silvertip quite a close third.

Meanwhile, the Pacific Division saw some excitement shortly before its start. A late-arriving crewmember for Shamoun leapt aboard from a tender that sped out to the yacht. Without missing a beat, Shamoun headed straight for the start, even crossing the starting line first.

However, it was returning racer Steinlager 2 that practically made the New Zealand Millennium Cup look like child’s play. She secured her lead by the second mark. Allegro aggressively pursued her, but couldn’t overtake her. Allegro crossed the finish line after her, followed by Antaeus, Tawera, and Shamoun.

Check out some of the action from race day one of the New Zealand Millennium Cup. We’ll have photos of race day two tomorrow.