You are here: Home / Photo Galleries / Jetsetter, by Dynamiq: Gallery 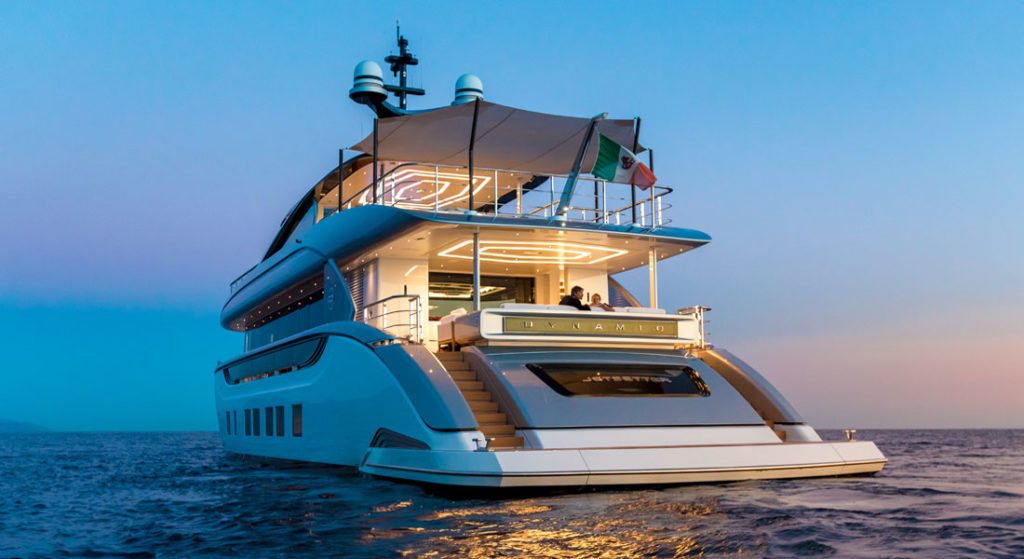 By definition, a jetsetter likes to travel, but isn’t an ordinary traveler. Jetsetters have discerning taste. They tend to go where they want, when they want. Jetsetter is a suitable name for the first megayacht from Dynamiq, for similar reasons. Primarily, she permits traveling in high style and in ways that other semi-custom megayachts don’t match.

You may remember that Dynamiq lets buyers outfit their yacht via an online configuration tool. It’s a yachting industry first. You get option-by-option selections, ranging from exterior paint color to crew uniforms. In another first, Dynamiq provides pre-tax costs for each selection, plus a delivery date. (See “Dynamiq Wants You To Customize Your Yacht on Your PC—Really.”) 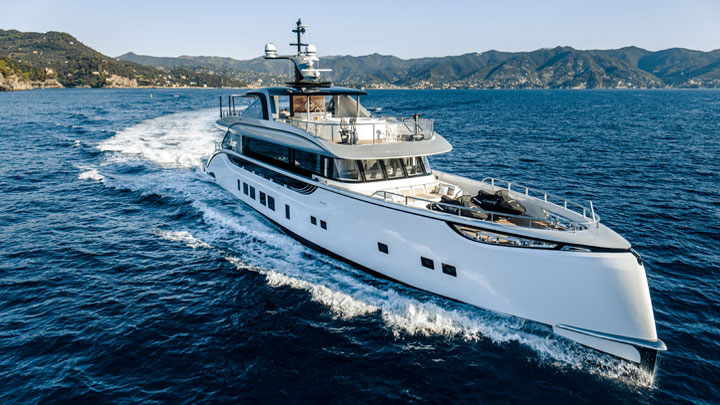 Jetsetter, built on spec, shows what’s possible. A Dynamiq D4 model, she measures 126’6” (38.6 meters), which some buyers wouldn’t consider for transatlantic crossings. But, she was engineered for a 3,000-nautical-mile range at 10 knots. Dynamiq says fuel burn at that speed is 21 gph (80 lph). She was also engineered for making fast work of visiting hot spots. Dynamiq says Jetsetter can go from Monaco to St. Tropez in a little more than two hours.

Most megayachts are meant for either long-range cruising or speed. If they’re speedy, sometimes they are uncomfortable at lower speeds. Dynamiq worked with Azure Naval Architects, Van Oossanen Naval Architects, and Vripack to ensure Jetsetter’s hull could handle the ranges of performance comfortably. In addition, sound levels throughout the interior at the 19-knot cruising speed reportedly don’t exceed 55 decibels, quieter than normal conversation. 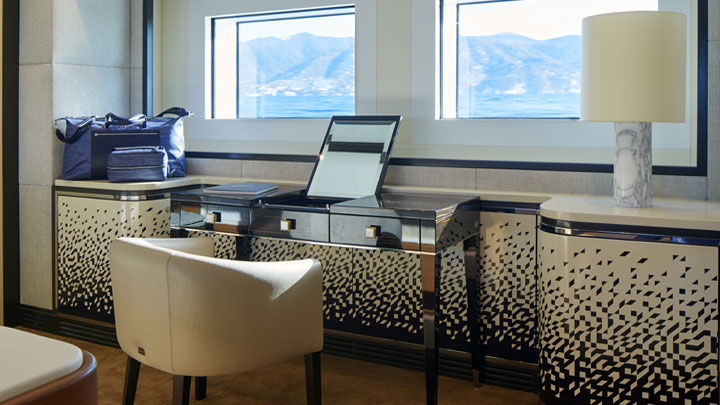 With a 25’3” (7.7-meter) beam and a traditional layout, this Dynamiq D4 still has surprises inside. Bannenberg & Rowell outfitted social spaces with common materials, like woods and leathers. But the eye-catching pattern in the master suite (above) isn’t typical for a spec build. More eye-catching geometric shapes are overhead in the saloon and dining area. Jetsetter also shows off items from Trussardi Casa, due to a collaboration between Dynamiq and the Italian brand. Dynamiq has agreements with other luxury brands, too, like Baccarat, Christofle, Hermès, and Loro Piana. For a higher-level sensory experience, sublte Aqua di Parma scents can waft through the air-conditioning system.

If you missed Jetsetter’s debut at the Monaco Yacht Show, she makes her stateside debut in February. She’ll be at Yachts Miami Beach. Enjoy this preview. Don’t miss the nearly 1,292-square-foot (120-square-meter) sundeck, significantly sized for this LOA.