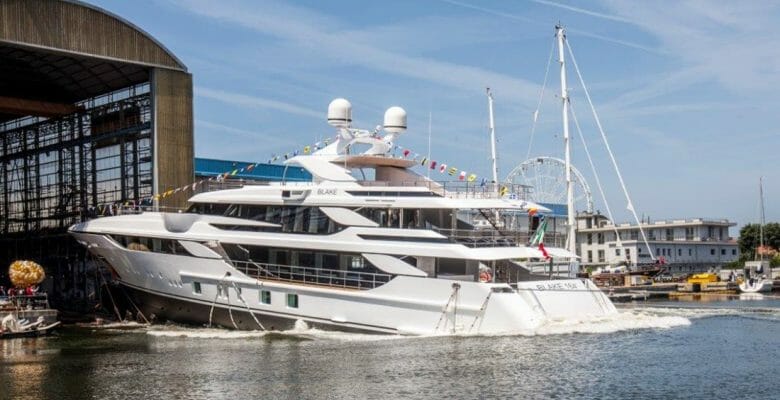 Imagine being one of 300 people to see an unusual launch. If you saw Blake slip into the water on May 26 at Benetti, you definitely saw something uncommon.

Actually, you saw two uncommon things. First, the 163-foot (49.8-meter) Blake has a fiberglass hull and aluminum superstructure. Related to this, the two components are the longest ones that Benetti has constructed to date. Second, the way Blake entered the water is different, at least among Italian yacht builders. She slid out of her build shed and directly into the water, as seen above. Even with “just” an 8-percent incline, the slipway encouraged Blake to make quite the splash. Apparently, no other Italian yacht yard has this type of arrangement for megayachts between 131 and 164 feet (40 and 50 meters).

The latter is a primary size range for the specific Benetti yard where Blake took shape. It’s the Viareggio facility, which inaugurated in 1999. In fact, Blake is the 11th megayacht to slide down the slipway there since that time.

Of course, more than her launch method makes this megayacht noteworthy. Announced publicly in January 2017, Blake is a spec build. The shipyard selected Bannenberg & Rowell Design for the interior design. Particulars aren’t available on the decor, unfortunately. However, four guest staterooms sit below decks, occupying significant floor space. In total, they take up 3,337 square feet (310 square meters). Notably, the eventual owners have the option of a fifth stateroom, a VIP, on the upper deck. The sky lounge there can transform when needed. Meanwhile, the forward portion of the main deck is for the master suite.

Sea trials should see Blake achieve a cruising speed of approximately 14 knots. The twin Caterpillar engines should also permit 4,000 nautical miles at 11 knots. This should encourage the buyers to spend significant time onboard.

Further set for significant good times: the beach club and toys. An aft garage holds the main tender, while two PWCs sit on the bow.