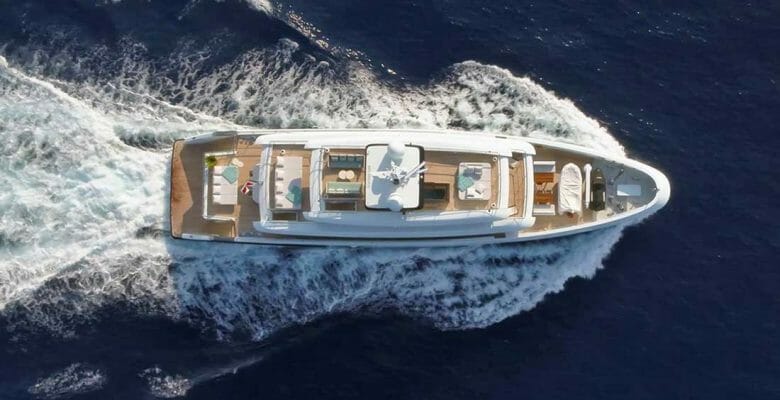 Kanga, spending her first summer season on the water, erupted in fire in Croatia on Friday. The flames nearly entirely destroyed the megayacht.

The 131-foot (40-meter) Kanga was at anchor outside of Dubrovnik, between the island of Olipa and the Peljesac Peninsula. Croatian media outlets report that nine passengers and four crewmembers were onboard when the fire started. All 13 people safely made it to shore, via tender. No one among them suffered injuries, apparently. However, The Dubrovnik Times newspaper states three firefighters received minor burns in battling the flames.

According to the website Total Croatia News, the captain of Kanga reported the fire on Friday morning around 8:30 a.m. local time. The firefighting and rescue efforts lasted several hours. (The video below appears to show the yacht prior to those efforts.) Croatia’s Ministry of the Sea, Transport and Infrastructure informed media that the priorities during that time included preventing and containing fuel spills into the water. In addition, the Ministry said, the goal was to put out the fire aboard Kanga without sinking her.

Those efforts succeeded. What remains of Kanga arrived, via tow, to the small nearby harbor of Prapratno earlier today. The Dubrovnik Times newspaper published photos revealing charred vestiges of her superstructure, which was almost fully destroyed. Significant damage occurred to the hull, too.

The investigation into the cause of the fire continues. Maritime officials have not commented on possibilities. Neither has CCN, which built the fully custom megayacht, launching her in May. The shipyard released a statement indicating it is cooperating with authorities. Croatian media outlets, though, speculate that it was an electrical fire.

Kanga was set to debut at this week’s Cannes Yachting Festival, as well as the Monaco Yacht Show later this month. CCN called Kanga a Fuoriserie project because that term loosely translates to “custom built” from Italian. The 131-footer was the shipyard’s first all-custom yacht. CCN has long focused on semi-custom series—and sporty, flying-bridge series. Kanga, by contrast, was an expedition megayacht, made for navigating in light-ice conditions as well as cruising in warm-weather destinations.