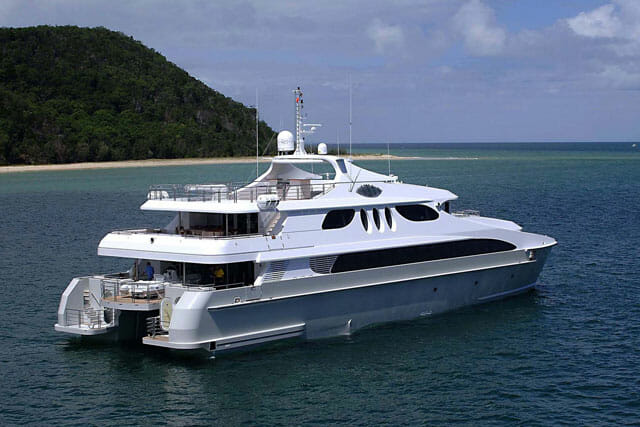 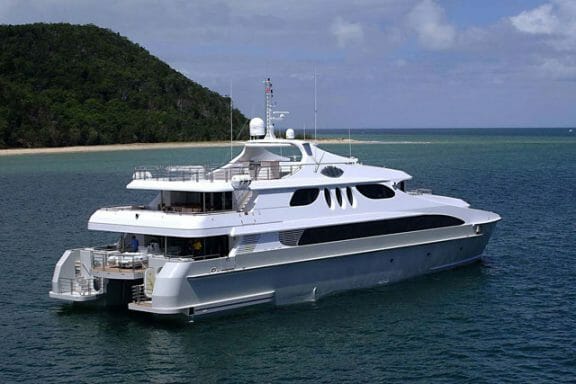 The popular charter megayacht Seafaris, which entertained a variety of people in the waters of Australia, caught fire and sank early today.

The 135-foot (41-meter) Seafaris, a power catamaran, was in Cow Bay, off the northern coast of Queensland, when the fire broke out, apparently around 6 a.m. local time. All 16 people, guests and crew, were able to board two liferafts after the crew sent a MAYDAY. A container ship that heard the distress call picked them up, reportedly an hour and a half later, and took them to Cairns. Police and ambulance teams were at the dock when Seafaris’ crew and passengers arrived, examining them as a precaution, but no one appeared injured. As of about two hours before this story went to press, Marine Safety Queensland, a government agency, stated that none of the crew or guests has been interviewed yet, since they are still a bit shocked.

Jeff McCloy, a property developer and lord mayor of Newcastle in New South Wales, is the owner of Seafaris, and he arrived in Cairns earlier today to check on the guests and crew. One local television station quoted him as saying, “(The boat was) a marvelous thing for Australia, and it was doing great charter work, but the charterers onboard are safe, and that’s the main thing I’m concerned about at the moment.”

Investigators still need to determine what caused Seafaris to catch fire. They also plan to send divers down to where the megayacht lays, about 66 feet (20 meters) below the surface, tomorrow to see how much fuel is still onboard. They state that Seafaris was carrying about 3,698 gallons (14,000 liters) of diesel. Some spilled on the water’s surface during the incident, and local authorities say much of it has already been cleaned up or dispersed on its own.

Seafaris was built in 2006 at Forgacs Shipyard in Australia. The all-aluminum multi-hull was designed by Incat Crowther. She had accommodations for 10 in the owner’s party and eight crew. McCloy, an experienced boater and avid fisherman, commissioned her to cruise the Great Barrier Reef.