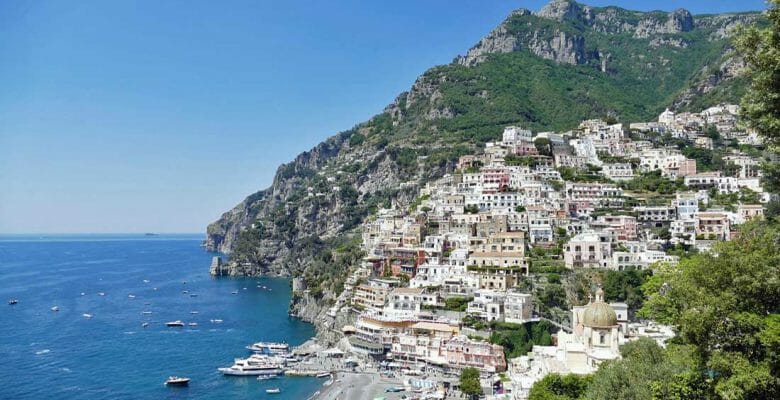 Editor’s note: Due to reader requests, we’re increasing our cruising coverage, with a series titled 3 Days Cruising. In each feature, we’ll whet your appetite for different regions, further giving you insider information. In this first installment, we focus on Italy’s Amalfi Coast, through the eyes of the staff at Marina d’Arechi in Salerno. If you’re spending the summer in the Mediterranean, Amalfi is a must. The season is long, warm, and sunny, often bathed in cooling sea breezes. These all make it ideal cruising territory.

Situated just over halfway down the west side of the boot of Italy, Marina d’Arechi is a year-round port village. It’s in the lee of the mountains surrounding Salerno, a city closely connected with Naples. In addition, road, rail, and air all internationally connect it. In fact, Salerno has its own executive airfield.

Opened in 2017 for yachts up to 427 feet (130 meters) Marina d’Arechi is just a stone’s throw from a multitude of spectacular and iconic destinations. For three days of cruising, check out the fashionable village of Positano, the beauteous island of Capri, and the historic, preserved ruins of Pompeii. You can reach each in one day. When you return to the luxurious facilities of the marina, you can relax with a summer sundowner of Limoncello. 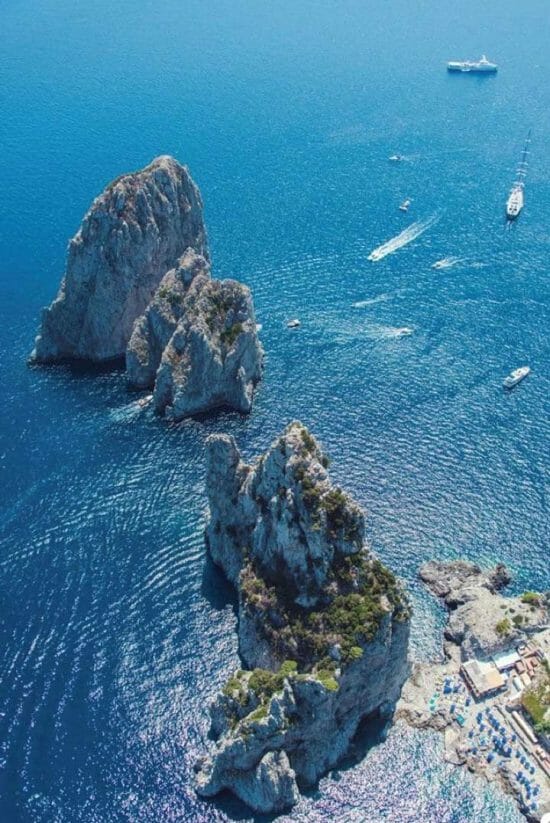 A dramatic vertical panorama of colorful buildings on the side of a mountain (above) characterize Positano. You can best appreciate its unique beauty from the sea. It’s only 14 nautical miles north of Marina d’Arechi. It’s been a cosmopolitan holiday resort since the Roman Empire, as the discovery of a villa beneath the Santa Maria Assunta church revealed. The Greeks and Phoenicians frequented it on their way to the west of Europe, too. This explains why some say they named Positano after Poseidon, the Greek god of the sea.

The long stairways from the marina to the highest spots of the village give the impression of being on a film set. Indeed, Positano has been a film backdrop and a haven for musicians and artists for centuries. For instance, Only You and Under the Tuscan Sun filmed here. Furthermore, the Rolling Stones’ Mick Jagger and Keith Richards wrote “Midnight Rambler” on holiday here.

Positano is renowned for glamorous fashion and, since the mid-20th century, beach apparel. Along its pebbly alleys, you’ll find many local artisan boutiques, specializing in the creation of leather footwear and ready-to-wear clothing. Bright colors and flower patterns characterize them. This stunning town lends its name to the Moda Mare a Positano, an annual fashion venue, broadcast to millions and a summer symbol of the Italian dolce vita lifestyle.

The island of Capri is 24 nautical miles north of Marina d’Arechi. The Roman emperor Tiberius fell in love with this place and had a magnificent summer house on its eastern side. Walking along the path of Tragara, looking at the indescribable beauty of the sea, and browsing the small stores creating flowery perfumes can all take your breath away.

But, save a breath or two to go diving into the crystal-clear blue waters in the shadows of the Faraglioni. These oceanic rock towers (above) dramatically jut out of the sea. Simple experiences like this perfectly explain why Capri is called the Bel Paese—literally, the “Beautiful Country” of the Amalfi area. Loved by Audrey Hepburn, Ernest Hemingway, and Grace Kelly, the island has been a constant attraction for the world’s jet set. La Piazzetta, a tiny square populated with cafes, is Capri’s focal point. In fact, it’s often referred to as the world’s most glamorous living room. The world’s famous rub shoulders with the locals, sipping epresso during the day and something a little stronger in the evening. 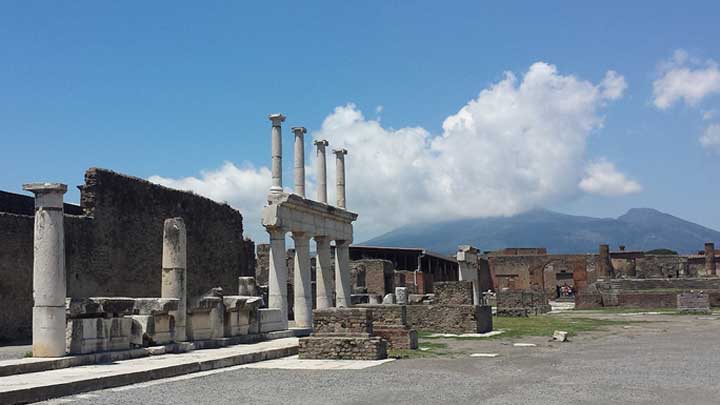 And for something entirely different! The excavations of Pompeii (above) and Herculaneum are just few a few miles from Marina d’Arechi, on land. UNESCO World Heritage Sites, these two bustling Roman towns were buried in 79 A.D. More than 15 feet of volcanic ash from Mount Vesuvius suddenly and violently caused the instant death of the entire population of both towns. Today, they constitute one of the most evocative archeological sites on earth because they provide an extraordinary insight into the everyday living of its inhabitants. Organic remains, tools, and even Latin graffiti carved in the walls allow a unique empathy with visitors some 2,000 years later. It is fascinating how little we have changed! Delicate excavations are still active and even now throw up new discoveries about Roman life.