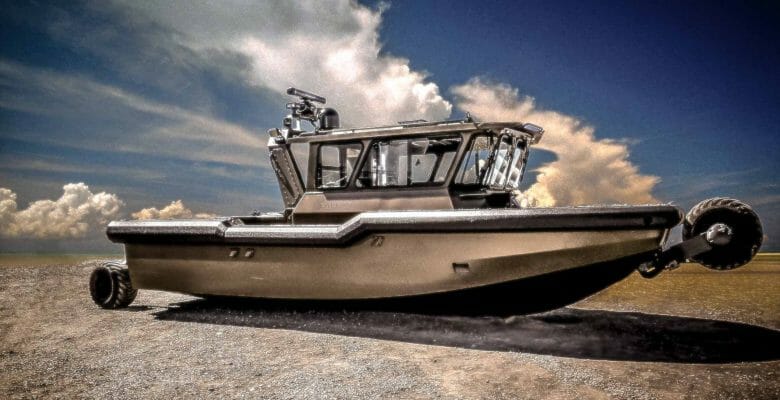 Yacht owners and other customers in 50 different countries are responsible for Sealegs selling more than 1,500 of its rugged boats so far. One of its largest amphibious craft is up for auction by the company, the IKA11.

This particular model took shape in the company’s facility in New Zealand, then headed stateside for promotional duties. That explains why her twin 370-hp MerCruiser diesel inboards have just 100 hours on them. The idea behind the 36-foot (11.1-meter) IKA11 is coastal or riverine usage, by government-agency professionals. So, for instance, it suits their interceptor needs, personnel transfers from sea to shore, and even covert operations. However, it offers plenty of luxury-oriented upgrade possibilities, too.

In fact, the Sealegs IKA11 can be a dive boat, or serve as a scouting tender for an equally rugged explorer megayacht. Request some extra seating aft, to complement the bow seat.

Whatever purpose you have in mind, the amphibious craft comes with quite a sturdy support system. The specific amphibious gear that Sealegs incorporates has a maximum load capacity of 7.5 metric tons (about 16,535 pounds). Suffice it to say it’s heftier and larger than the recreational Sealegs system. If the military and other professionals can use it, so can you.

As part of the auction, Sealegs will assist with arranging shipping. Additionally, it can recommend an outfitter to customize the IKA11 to your specific needs. Finally, you get a six-month warranty.

Interestingly, even though this is the largest-ever Sealegs amphibious craft, it’s not the first time the company has auctioned off a boat. Six years ago, it auctioned one of its Sport RIBs bearing the signatures of the New Zealand All Blacks Rugby team—all players and the coach—on the helm.

Learn more about the boat via the auction listing, and contact the team listed there with questions.