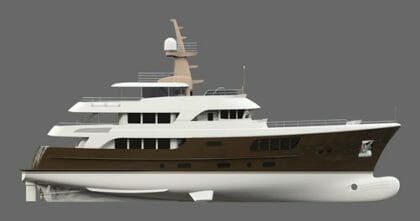 Thirteen is an unlucky number for some people, but it’s no bother to the team at Alloy Yachts. Project AY44, seen here, marks the 13th motoryacht in the New Zealand-based yard’s history.

Steel plate cutting is already underway on the 39-meter (128-foot) Explorer Yacht. Naval architecture and exterior design are from René van der Velden. (On a side note, while the Dutch designer is known for his motoryacht and sailing yacht projects, he’s also designed explorers, including the Peer Gynt 85 and the Moonen 114.) The yacht’s draft of 2.7 meters (nearly nine feet) means she should be able to pull into plenty of anchorages worldwide on her travels.

Few other details have been released, though Redman Whiteley Dixon is designing the interior.