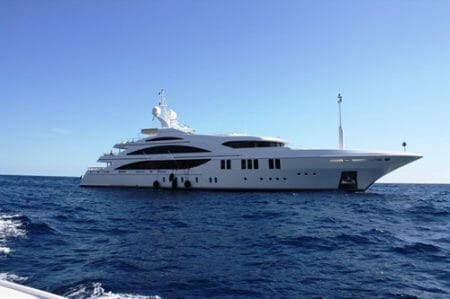 Active charter guests no doubt recognize the name Liveras Yachts, which has owned and operated some of the most well-known charter yachts over the past 20 years. Alysia, Annaliesse, and Lauren L were among them. All three featured grand spaces and equally grand decors, with entire decks devoted to spa treatments/fitness and wellness and, not to be overlooked, capacious saloons and dining rooms that could hold a few dozen people. In fact, the yachts were meant to cater to crowds: Alysia and Annaliesse accommodated 36 guests, and Lauren L accommodated 48. They became the go-to yachts in recent years that handily responded to the demand from large families and large groups of friends and business associates wanting one yacht, not tandem charters. 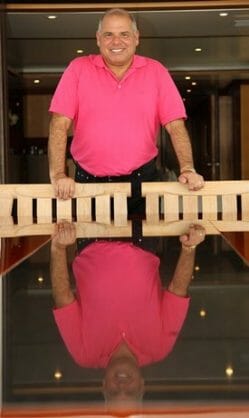 Andreas L (above), the newest yacht in the Liveras fleet, stands in stark contrast. She accommodates “just” 12 guests. That makes her more in keeping with many other charter yachts… but there is an important difference. This 60-meter (197-foot) megayacht and her crew make you feel so instantly comfortable and at ease, it’s almost as if you’re at home.

Turns out, that’s exactly the goal that Dion Liveras (pictured at left), who is overseeing operations, has in mind. Indeed, over the two hours that I spent aboard in his company off the coast of Monaco, enjoying lunch on the sundeck and exploring her interior, I appreciated how Andreas L has a far more intimate and down-to-earth feel than you might expect.

Andreas L isn’t more intimate simply due to her size—about 100 feet smaller than each of the three megayachts mentioned above. Credit is due to the contemporary Redman Whiteley Dixon interior, highlighted by wenge and anigre wood paneling and neutral fabrics. Each guest stateroom has essentially the same decor, ensuring no one feels as if he or she is receiving preferential treatment. The overall effect is beautiful in its simplicity, encouraging you to look around yet also sink into a settee and watch your favorite sports team on the bridge-deck television. In fact, Liveras joked a few times about turning on the tube, since his favorite English football team had a match going on.

Jokes aside, Liveras said he and his family took on the yacht a few months ago purposely because she was a more subdued superyacht than their previous fleet members. As much as they had achieved success with catering to crowds who wanted the finest out of life, they felt a change of pace was in order. When they saw this yacht, launched as Amnesia by Benetti in 2008, they knew she fit the bill: luxurious yet laid-back, sophisticated yet soothing.

That was certainly the experience during lunch. Our meal was an unusual combination of haute cuisine and home cooking. Every course was a perfect complement to the next. The starter of luxuriously rich broccoli soup (so fresh and fragrant, you would think a garden were aboard) was an excellent precursor to Kobe beef medallions as the main course. But that main dish was the ultimate comfort food: a hearty meat and potatoes meal, served atop some of the smoothest mashed potatoes I’ve ever had. Between these dishes turned out by the two chefs and the attentive stews and stewardesses (a total of 15 crew are aboard), I could easily imagine even the most hard-driving personality settling in and relaxing relatively quickly. Andreas L and her crew had the magic touch. My hat is especially off to them given the sea conditions that afternoon: swells strong enough to slam her tenders up against the beach club boarding area and featuring enough roll to make it difficult to walk in a straight line on occasion. Indeed, the swells had such force that it took a handful of crew to ensure safe boarding and disembarking, and their steady hands were most welcome.

To book Andreas L, contact Liveras Yachts or a reputable charter broker. She’s available in the Caribbean this winter starting in November. Her Med rate is €350,000 (approximately $479,000) plus expenses, and her Caribbean rate is $400,000 plus expenses (quoted in the different currencies purposely because more Americans tend to charter in the Caribbean).