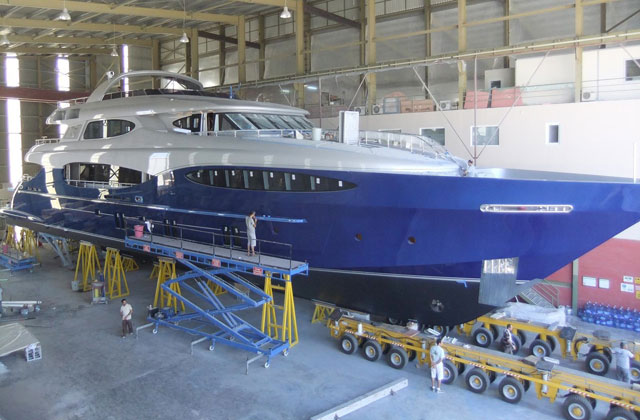 Vicem is celebrating the first launch in its new all-fiberglass megayacht series, the Vulcan Line, with this 151-footer (46-meter). She’s the first of three sleeker, speedier, and more voluminous 100-foot-plus megayachts set to debut this year.

When Vicem introduced its Vulcan Line of megayachts, the goal was to diversify beyond the traditional mahogany cruisers it has long constructed. The Turkey-based builder wanted its traditionally American buyers to enjoy the lower maintenance and lower weight advantages of fiberglass. As a result, CoreCell-cored fiberglass is used for the model shown, called the 46m, as well as the 35m Tri-Deck (118-footer) and 32m RPH (105-footer) launching later this year. The emphasis on light weight is complemented by a hull and overall naval architecture from Frank Mulder of Mulder Design known for many swift yachts. Vicem expects the 46m to top out at 25 knots, powered by twin 3,650-hp MTUs. (Of course, range at more economical speeds is also important. Vicem says that at 12 knots, the 46m should achieve 4,000 nautical miles.) Since draft is 7’2” (2.2 meters), the Vulcan 46m should still be able to access popular islands and other ports.

While Vicem and Mulder Design have a set engineering plan for the Vulcan Line series, the interiors are open to customization. Art-Line Interiors worked on the 46m, fitting her with an office and gym in the full-beam main-deck master suite. There’s also an atrium rising from the lower deck to the sundeck, bringing plenty of natural light in. Six staterooms accommodate guests, who also get to enjoy indoor and outdoor dining.

The 46m and all other Vulcan Line megayachts are RINA classed and comply with MCA standards.