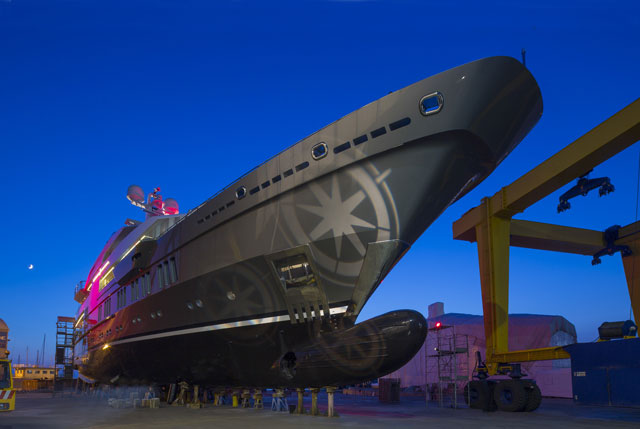 The 236-foot (72-meter) megayacht Stella Maris made her way outside her build shed at Viareggio Superyachts (VSY) over the weekend. Stella Maris marks the largest megayacht to date from the Italian shipyard.

With exterior design by Espen Øino and Laurent Giles Naval Architects, plus interior design by Reverberi Interior Design, Stella Maris was commissioned as a floating home by a client with quite specific ideas. He wanted the relaxation spaces to be welcoming no matter what season of the year. He also liked design elements often not found aboard megayachts, such as multi-level decks and the use of glass as walls. The latter are found in the main and upper saloons as well as the master suite, giving the illusion of larger, longer spaces.

Also worth noting: live plants lining the decks devoted to the guests and the owner (who gets a deck all to himself, too). The sundeck, outfitted to look like a Mediterranean beach, transforms into a night deck through the use of mood lighting.

With some work still to be completed, Stella Maris remains on land. She should be in the water next month, however. Stella Maris will then debut at the Monaco Yacht Show in September.

UPDATE, AUGUST 10, 2012: VSY released this photo from the formal launch ceremony on July 27. Because of her dimensions, VSY had Stella Maris transferred via barge to La Spezia. Stella Maris was floated into a drydock, which was then drained for the festivities. Once they were completed, the drydock was re-flooded, and Stella Maris set off on her first sea trial back to Viareggio. 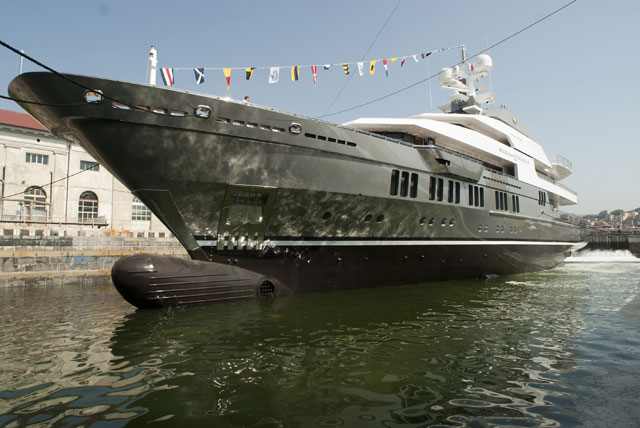