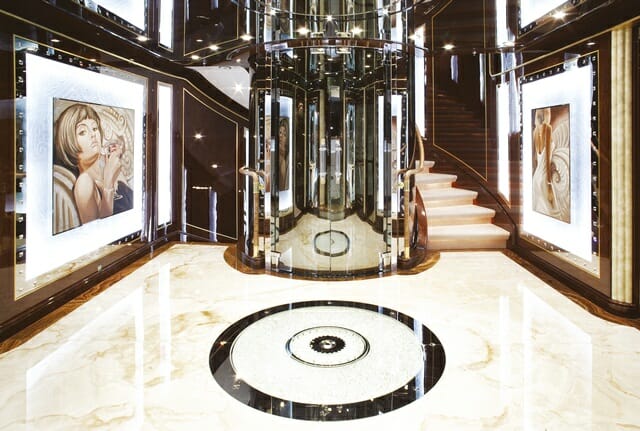 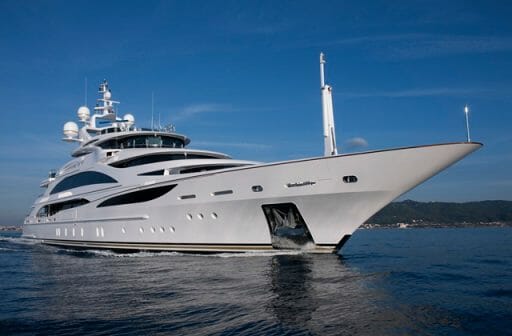 Showstoppers are called that for a reason. The 200-foot (60.95-meter), Benetti-built megayacht Diamonds Are Forever certainly fit the bill during the Yacht & Brokerage Show in Miami in February. She’s expected to do the same at the Cannes show next month. In each case, Diamonds Are Forever marks the largest yacht ever on display at the event.

But ultimately, what makes Diamonds Are Forever a showstopper is how her owners, John and Jean Staluppi, managed to make the megayacht more than just glitz and gleam. To be sure, Diamonds Are Forever lives up to her name, and the Staluppis’ longstanding approach to decor, by being extravagant. But, the Staluppis recognized the value of doing things a bit different layout-wise, based on their experience of owning numerous yachts and, equally important, listening to the advice of others. 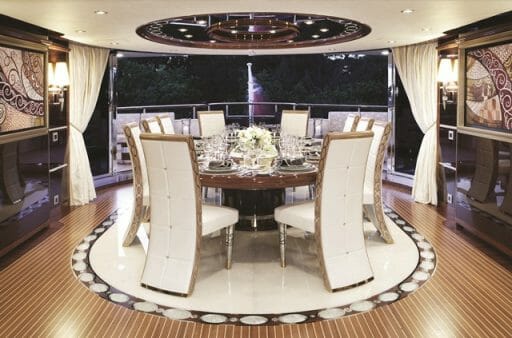 To that latter point, consider the upper-deck dining area (above), aft of the skylounge. It’s an indoor area ringed at its far end by full-height, smoked glass. Since the Staluppis have always enjoyed alfresco dining, the layout was a bit of a concern. A compromise was struck by making the center panels into sliding doors. And now the Staluppis can’t imagine dining any other way. “Every boat we’ll build will have this for now on,” John says. In fact, he thinks the area is one of the best features of the boat. “It can be formal or informal,” he says. “Even if it’s raining or cool, you can enjoy it.”

As for features the Staluppis wanted incorporated, a few things were key. Guest staterooms had to have king-size beds instead of queens. Some people might ascribe that choice to the fact that the Staluppis are American, and Americans tend to like larger beds. But, Queen of Diamonds was built for charter, so why not pamper all of the guests? Related to this, John reports that the megayacht has had back-to-back charters already this summer and has been enjoyed by Americans, Russians, and other nationalities. 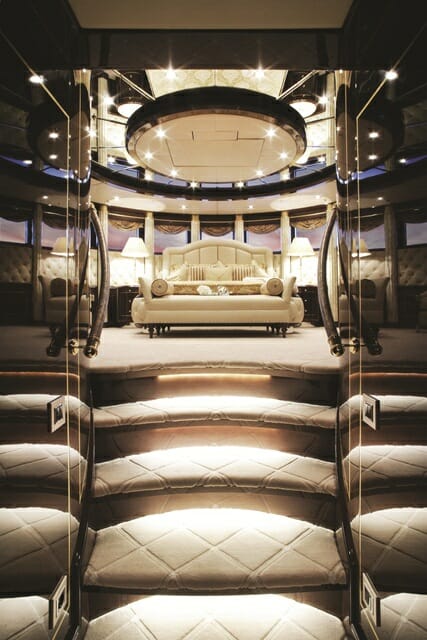 Something certainly appreciated regardless of nationality: the main-deck VIP (left). It’s a split-level design forward on the main deck, with terrific views and, interesting enough, two heads. The primary head is just inside the entry, while the second head is more of a night head, up the steps and therefore in closer proximity to the bed.

Other stand-out features aboard Diamonds Are Forever are the beauty salon/massage room, sauna, and gym on the main deck, the upper-deck master suite, and the skydeck. The latter is an additional deck level that John requested be added. It’s a lounging and sunning space atop the megayacht’s sundeck.

Lest you forget you’re aboard a James Bond-themed yacht, there are specially commissioned paintings of effortlessly sophisticated gents and ladies throughout the decks. They’re adorned with crystals, to boot. Then there’s the chromed-glass treatment found throughout Diamonds Are Forever. It’s an experimental technique created by glass specialist Marieux, and when Diamonds Are Forever’s interior designer, Evan Marshall, learned of it, he knew the Staluppis would love it. The panels look much like etched or stamped metal panels, quite impressive. Diamonds Are Forever is the first—and so far the only—megayacht to feature them.

There’s a good deal of dazzle to Diamonds Are Forever. With her LOA and nearly 35-foot (10.6-meter) beam, that translates to a lot of sensory input. But then again, isn’t commissioning a custom craft the ultimate expression of personal style? As John puts it, “it’s about doing something really spectacular. What’s the use of having a new boat without trying to do things nicer or better?”