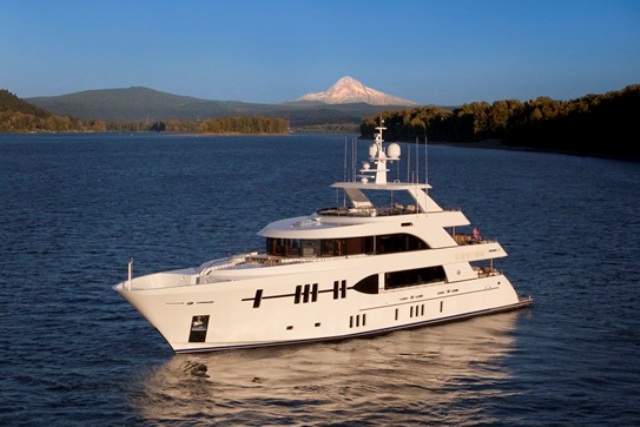 When Ocean Alexander decided to offer a larger megayacht model, the Ocean Alexander 120, it took a different approach than arguably anyone would have expected. First, the Taiwan-based builder team up with another yard, that being Christensen Shipyards, to have the 120 constructed. Equally important, Ocean Alexander incorporated some details into the project that make it suitable for buyers interested in a long-range, economical cruiser. 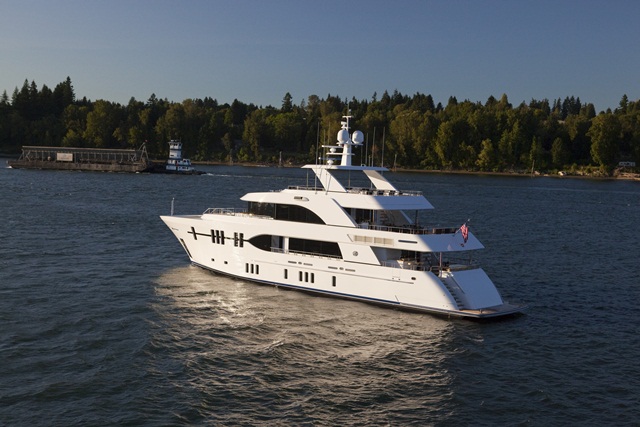 The trideck Ocean Alexander 120 measures 121’2” (36.9 meters) and has a beam of 25’2” (7.7 meters). That’s in keeping with similar offerings from other builders, as is having a main-deck master, on-deck galley, and more. The differences come in how the spaces are arranged. Take the galley, for example. It’s huge for a yacht of this size. Besides a well-arranged cooking and prep areas, the galley includes a walk-in pantry, full freezer, and a U-shape coffee/casual dining spot. Seeing as American owners and guests like to linger in the galley, chatting with the chef, it’s a great setup. They can enter via a door along the starboard-side foyer. Come formal mealtime in the dining area, the stewardesses can use a door separating the galley from the combination saloon-dining room. 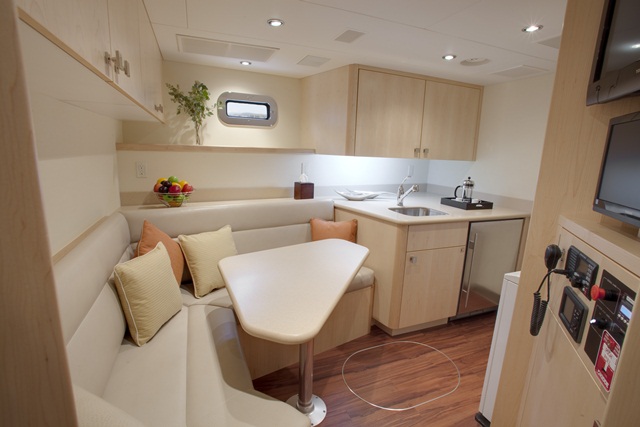 You might assume that the coffee/casual dining area doubles as the crew mess. There’s no need, due to a full crew mess below decks, for six crewmembers and the captain. Further wise thinking in the crew area includes an ironing board stowed behind a mirror in the hallway outside their cabins. A vacuum and more general stowage can go beneath the stairs leading down from the main deck. Ocean Alexander, together with interior designer Evan K. Marshall, used what can often be wasted space for practical needs. 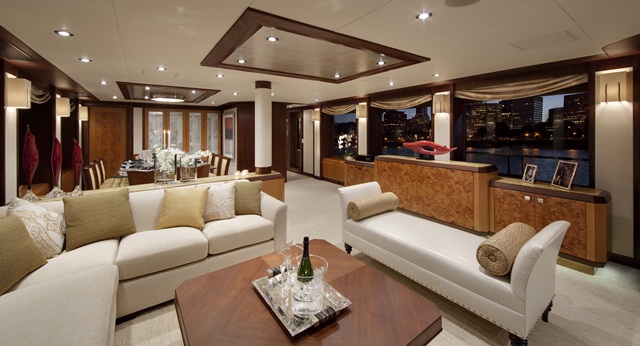 Also practical is how furnishings are arranged in the Ocean Alexander 120’s saloon and dining area. Nothing is flushed against the bulkheads and windows. The TV cabinet, to starboard in the image here, is a good example, with air vents being behind it. The arrangement lets air circulate and simultaneously avoids having grills visible up at the ceiling level, where some builders install them. 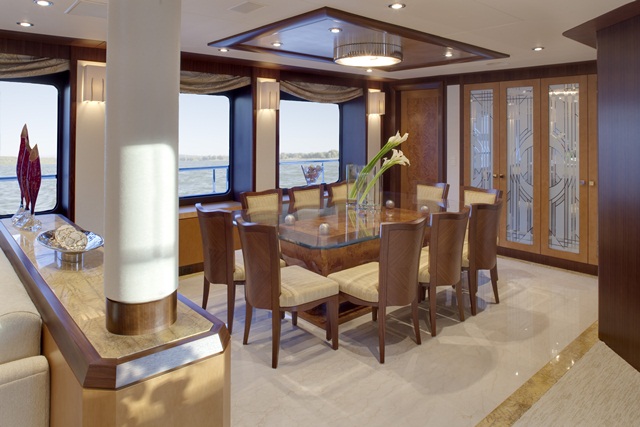 Specific to the dining area, note how the table is situated lengthwise, rather than the traditional side-to-side position. It’s a minor detail, but it does make a difference in lending the dining space more of its own identity apart from the saloon. Note, too, the three floor-to-ceiling, glass-fronted doors. They’re artistic ways of concealing glasses, dishes, and cutlery stowage. Similar full-height doors flank the aft-deck entry of the Ocean Alexander 120, setting a beautiful scene as you step inside. 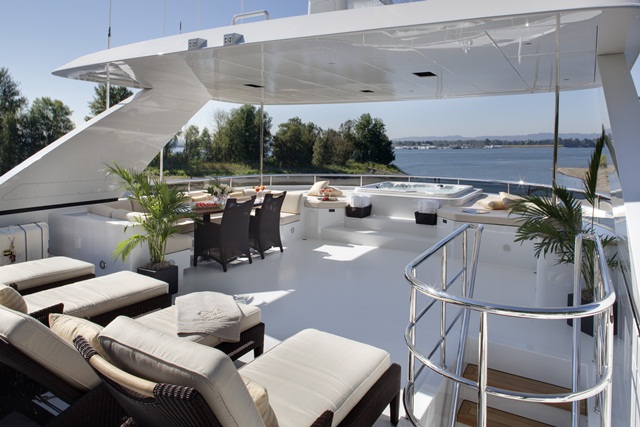 As lovely as the interior is, from the guest staterooms (two twins and two queens) on up to the intimate sky lounge, the Ocean Alexander 120 puts a big emphasis on outdoor living. Here’s where the megayacht marks yet another departure from other builders’ models. The sundeck is a full deck, not a reduced-size perch. With a hot tub forward that’s flanked by sunpads, followed by a barbecue and dining area, and rounded out by loose lounges, the sundeck makes this 121-footer feel larger than she is. 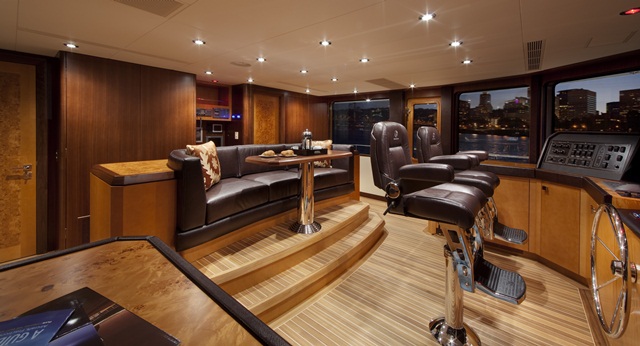 Equipped with twin MTU 12V 2000 M72 diesels, intended for continuous operation, the Ocean Alexander 120 provides leisurely cruising. She tops out around 15 knots, and at 10 knots reportedly can achieve a range nearing 3,000 miles. Those speeds further differentiate the megayacht, since other competitors’ offerings are in the 20-knot range. Semi-displacement speeds are suitable for some, but with this type of onboard living, why rush? Enjoy the journey as much as the destination from the observation settee in the wheelhouse. If you recall the early word on the 120’s design, you may remember the helm was supposed to be strikingly different. Doleski says the Ocean Alexander team went back and forth on whether to do it, finally deciding to stick with tradition because some potential buyers felt it was too radical a departure. It’s still on the drawing board, though, should someone want it.

The MCA-compliant 120 is an impressive first offering in Ocean Alexander’s new Megayacht Series. She’s laid some good groundwork for the other models in the series, too, those being the 112, 135, and 155. It all promises an interesting future for the 30-plus-year-old brand.