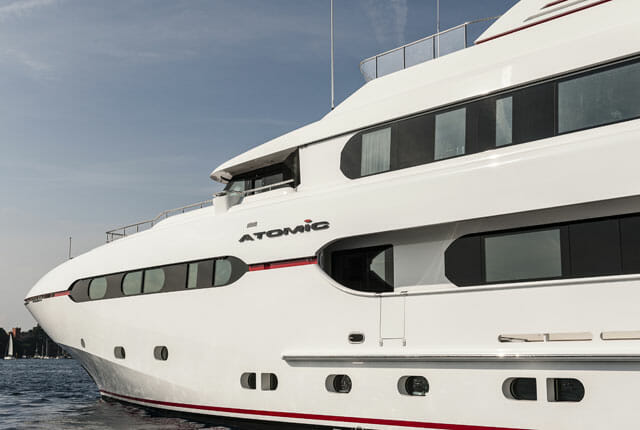 Some people surprise their loved ones with flowers or a favorite meal. An American who enjoys his time on the water as much as he does in it decided to surprise his family with a yacht. And not just any yacht, the 147’5” (44.95-meter) Atomic, here with her Intrepid 327 powerboat tender. From the time he signed the contract with Sunrise Yachts in the summer of 2013 to her launch a year later, Atomic was a secret. He therefore didn’t visit the Turkish yard as much as some buyers do, but not to worry. Between delegating duties to key team members and Sunrise having started the yacht on spec, he was confident of happy surprises all around. 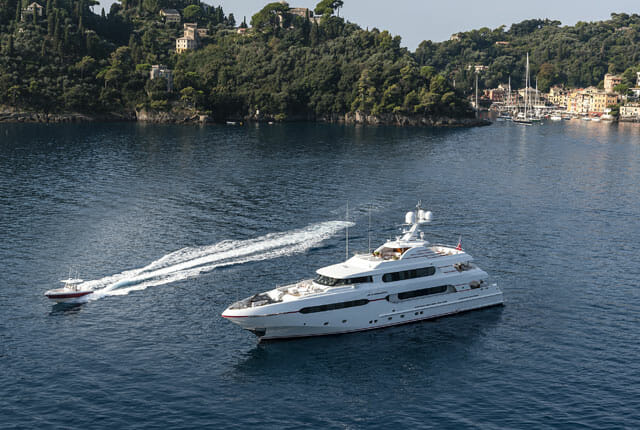 Atomic builds in many respects on Africa (now named Dynasty), the yard’s first launch from 2009. The styling is the same, from Studio Scanu, as is naval architecture team, from Sunrise’s own department and Karataş Yacht Design. Atomic further emphasizes volume—more than offered elsewhere. A similar-size displacement yacht from a fellow European builder has a gross tonnage of 456, whereas Atomic has a gross tonnage of 499. 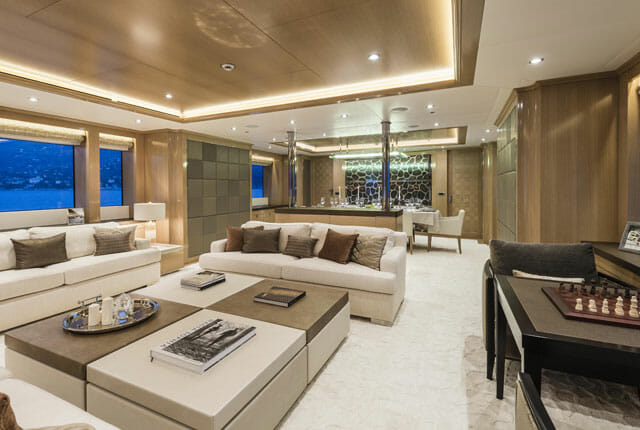 The owner worked with Franck Darnet Design for the thoroughly contemporary, casually comfortable interior. Decor elements like leather, polished metal, and of course wood, primarily teak, come together well here in the saloon and formal dining area. It may be tough to discern, but the teak-faced doors forward by the dining table have a basket-woven pattern. Excellent headroom and a beam of 29’3” (8.93 meters) underscore the voluminous feel throughout Atomic. 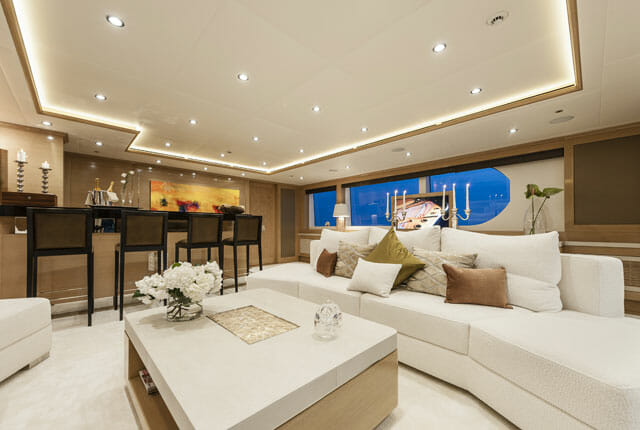 It’s easy to imagine the skylounge being the primary social space inside. Two large settees face each other for a conversation area, and a TV rises as shown to starboard. Guests can move effortlessly from the bar out to the alfresco dining area. A good-size pantry, with a dumbwaiter, is behind the bar, too, making the crew’s job easier. 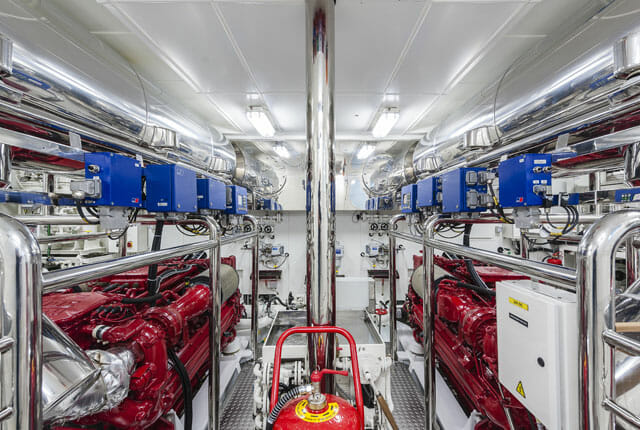 Most owners leave the input into the engine room up to their captains and/or engineers. The owner of Atomic did make one request: the red paint for the twin MTUs. It matches the red stripe along the megayacht’s sides. Workbenches are positioned aft of each engine, which are surrounded by split-level, diamond-plated access. As Sunrise Yachts did on Africa, Atomic has a technical tunnel accessible from the engine room. It’s where you’ll find the watermakers and other equipment. The owner additionally planned the helm with his captain and Sunrise Yachts’ in-house team. 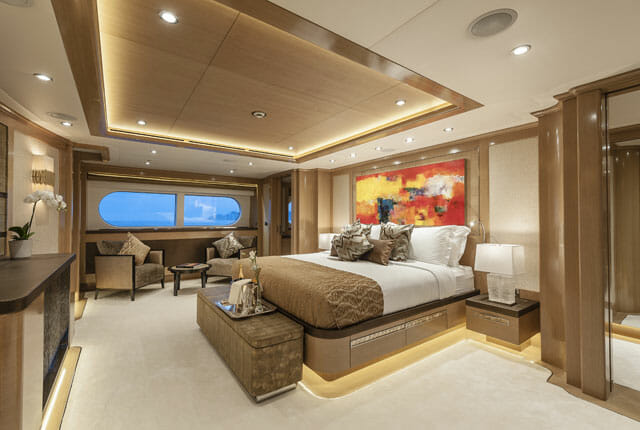 Of course, since the owner planned Atomic as a surprise, he thought about accommodations a lot. The main-deck master is complemented by four guest staterooms, one of which has twin beds. The decor is similar in each, and all furnishing were custom made for the yacht. 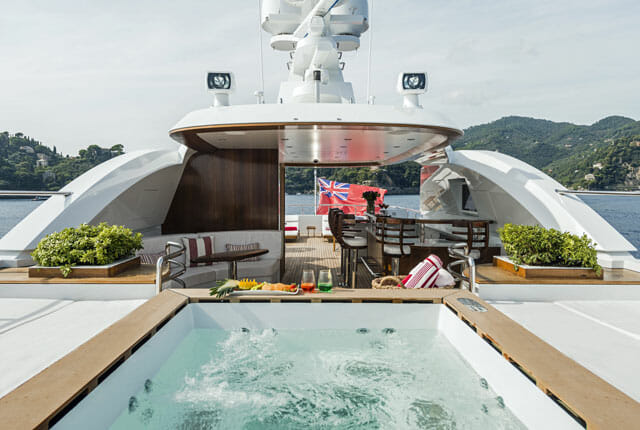 While not mounted in this photo, a clay-pigeon launcher is installed on the aft portion of the hardtop when the owner wants to do some shooting. Sunning, soaking in the hot tub, and sipping refreshing drinks are the other orders of the day on the sundeck. Anyone seeking more active pursuits can gear up in the lazarette’s fully outfitted dive center or ask the crew to launch the PWCs. 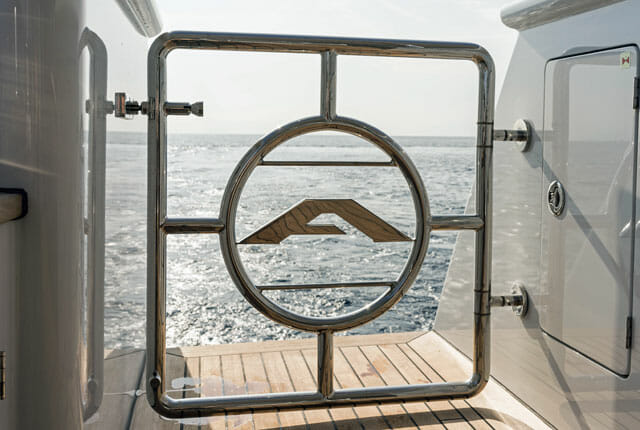 Just as the red engines and superstructure stripes aboard Atomic are deliberate, so, too, is the “A” you see here. It matches the style used for her nameboard and transom, both of which match the logo of the owner’s business, a scuba gear manufacturer.

Most buyers would probably be uncomfortable at the thought of planning a megayacht by themselves. To be sure, it was a risk undertaken by the owner of Atomic. The family’s initial shock—they learned of the yacht upon arriving in Turkey for the launch in August—soon turned to delight. They spent time aboard together in September in the Med, before Atomic debuted at the Fort Lauderdale show last month. They’ve cruised since then, too. The reported 4,000-nautical-mile range hasn’t been put to the test just yet. But then again, there are plenty months ahead for full discoveries.