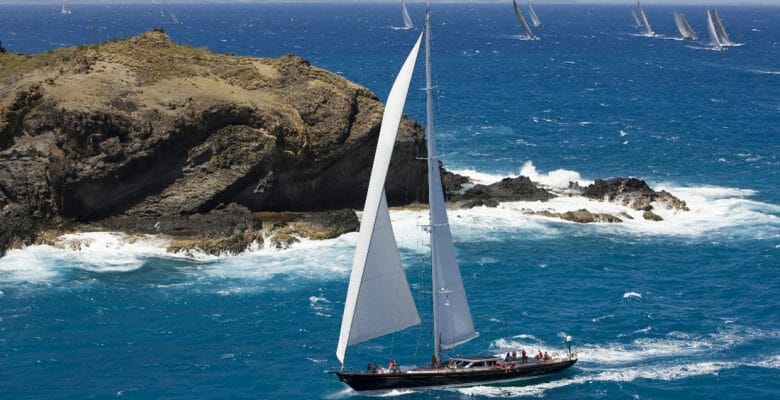 Plenty of yacht owners and crew are charity-minded, particularly in terms of environmental organizations. It’s not often, though, that your own dollars can help out. This summer, if you book the sailing superyacht Whisper, you’ll be supporting a National Audubon Society-supported group. It’s Project Puffin, which protects puffins, seabirds often seen in Maine.

Why Project Puffin? The 116-foot (35.4-meter) Whisper is spending the summer exploring New England waters, a region she has frequented previously, too. Stemming from that, the owner of Whisper wanted to give back to a region that had already given so much to the yacht’s guests. “New England is a prime destination for chartering, which is largely due to the fact that people love its scenic charm and natural allure,” explains Kaisa Pace, the charter manager for Whisper at Churchill Yacht Partners. “If we don’t protect the region’s environment and its wildlife, then there is no saying what will happen to its beautiful coastline.”

Puffins are abundant in other countries but were severely threatened in Maine in 1973, when the foundation was established. Back then, there were just two surviving colonies and all too few eggs. In fact, researchers found there were only enough eggs to fill two baskets. Thankfully, as of 2013, there were 1,000 pairs of puffins on five Maine islands. But, puffins lay just one egg annually and typically don’t breed until they’re five years old. These, complicated by oil spills and entanglements in fishing nets, makes their numbers susceptible to dwindle.

Whisper will donate one percent of her full season’s charter sales to Project Puffin. Her weekly rate is $65,000 plus expenses, so there’s the potential for a sizable contribution. Whisper is ideal for exploring New England, starting with her stature as a sloop. Sailing is a big part of life in New England, whether you go to Newport in Rhode Island or up to the Cape in Massachusetts. Built by Holland Jachtbouw in 2003, Whisper was also designed by two proud New Englanders, namely Ted Hood and Ted Fontaine. She carries a plethora of watertoys like paddleboards and kayaks. Waterskis, a wakeboard, and snorkeling equipment are on hand as well. (A 15-foot RIB supplies the speed for waterskiers.) Guests who simply wish to relax can do so in a classic teak-lined interior, complete with beautiful carvings and inlays, or out on deck, of course. Six guests can stay aboard.

Whisper is available for charter in New England from late June through early September.