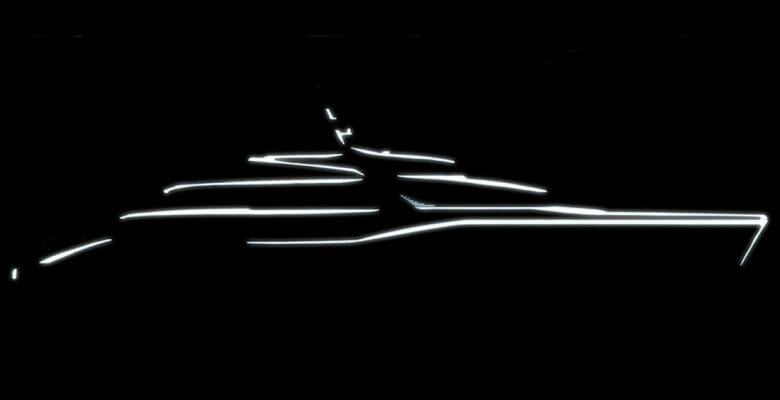 This teaser of a yacht profile is all we can see for now of what FB269, the newest yacht for John and Jeanette Staluppi, will look like. She’s the second megayacht the famed American yachting couple have commissioned from Benetti.

The full profile isn’t the only thing being kept close to the vest at present. The briefest of details are being divulged. LOA is 216 feet (66 meters), with Mulder Design providing naval architecture. You might recall that the Staluppis have collaborated with Frank Mulder, who established the design studio in 1979, several times previously. To wit: Moonraker, Octopussy, and The World Is Not Enough. They’ve also worked with Bas Mulder, who now owns the family-run studio, on their previous Benetti, Diamonds Are Forever. Styling for FB269 is by Giorgio Cassetta Design and Benetti’s in-house team.

If you’re familiar with the Staluppis’ history of megayacht ownership, you’ll recall they prefer more performance than the norm. To that end, Benetti FB269 is being engineered to exceed 20 knots at maximum speed. In a statement released by Benetti, the yard’s CEO, Vincenzo Poerio, calls FB269 “a very exciting ‘new challenge,’” more so than Diamonds Are Forever. When launched in late 2011, the latter was among the largest Benettis in terms of volume. HTe 200-footer (60.95-meter) was also the Staluppis’ biggest megayacht. John Staluppi adds that she’ll feature “new modern-day high-tech systems.” Benetti pledges to release more on this and other features soon.

Also if you’re familiar with the Staluppis’ history, you’ll know that they name each of their yachts after a James Bond film. So… seeing as their last delivery was Diamonds Are Forever, Benetti FB269 could be christened Skyfall. Though, there’s also a compelling argument for this new megayacht to be christened Spectre, the name of the upcoming Bond film. That’s because the Staluppis did sign a contract for another yacht to be named Skyfall, with Sunrise Yachts, but currently have the partially built project for sale.