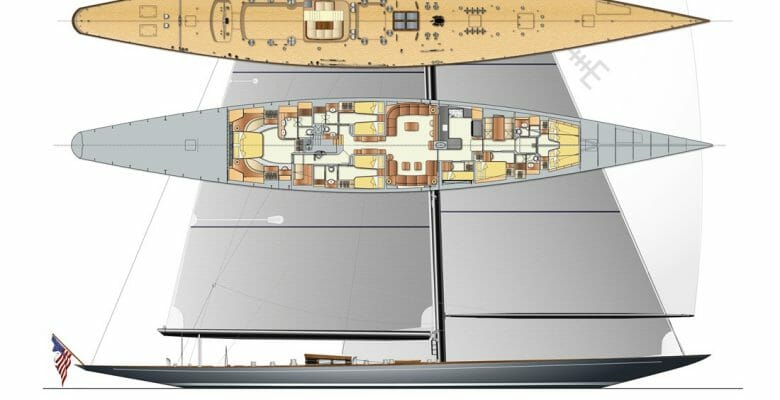 J-Class fans have reason to celebrate. Svea, whose construction stopped during the economic crisis, is being completed by Vitters Shipyard. She may just be completed in time to race against her fellow fleet members come 2017. Also known as JS1, partly in honor of the Swedish heritage of her original designer, Tore Holm, Svea started construction at Claasen Shipyards a few years ago. Only her aluminum hull was completed. A new buyer recently stepped in and has been working with Claasen and Vitters Shipyards.

The new owner has also been working closely with Hoek Design, which arguably has the most knowledge among all naval-architecture firms of the J-Class designs. Hoek Design has been involved in the re-creation and restoration of several of these sailing superyachts.

In terms of Svea, Hoek Design redesigned Holm’s original lines plan, plus his strength and construction plans. She’s being built partly of Alustar, a lightweight aluminum that didn’t exist when Holm initially penned Svea in 1937. She’s further being fitted with a carbon fiber mast, yet another modern creation. And, the owner wanted the original deck configuration changed, to better suit today’s racing gear.

At 143 feet (43.6 meters), the hull of Svea is longer than those of the existing J-Class fleet. She has an integrated traditional long keel, and is expected to be a spirited performer. In fact, Hoek Design commented prior to the current owner’s acquisition that “Svea could be built to win races and also be a great cruising yacht.”

To that latter point, Pieter Beeldsnijder is creating a traditional interior complementary to Svea’s classic profile.

The delivery date hasn’t been revealed. Nonetheless, it’s interesting to note that Svea was the only design drawn after the last America’s Cup for the J-Class, between Ranger and Endeavour II.