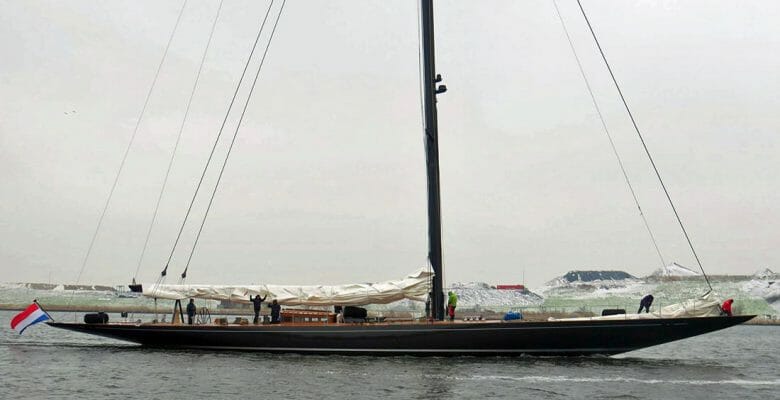 The newest J Class sailing yacht splashed in late January at Vitters Shipyard. Not only is Svea the first J from Vitters, she has the longest hull of the fleet. Her LOA is 143 feet (43.6 meters). Furthermore, she’s 90 years in the making. The sailing yacht is based on the 1937 drawings of Thore Holm. Holm was a successful yacht designer and an Olympic sailor. However, Svea didn’t come to fruition in his lifetime. (He died in 1977.) In fact, her drawings were somehow lost. John Lammerts van Beuren, a yachting historian, discovered them in 1999, while researching other designs.

Svea received the green light from the J Class Association in 2009 for construction. (It outlines rules for constructing replicas based on original plans.) By then, Hoek Design had adapted the specifications for all-aluminum construction, versus wood. The studio had also specified a main mast comprised of carbon fiber. It rises 176 feet (53.75 meters) high.

The build started at Claasen Shipyards several years ago, but stopped during the economic crisis. When a new owner acquired her in 2015, she moved to Vitters for completion. That owner has big plans for her, coming up soon. He will have Svea race against her fellow Js in June at the special J Class-only regatta during the America’s Cup. Hoek Design expects her to be a worthy competitor. Svea should also be a worthy pleasure cruiser, with a traditional decor by Pieter Beeldsnijder.