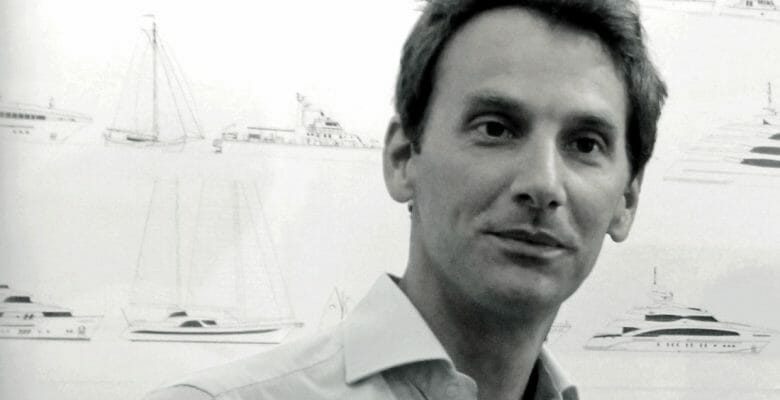 Peter (Piet in Dutch) van Oossanen founded Van Oossanen & Associates in 1992. In 2011 the company was renamed Van Oossanen Naval Architects, and in January 2012 his son Perry van Oossanen, together with Niels Moerke, were appointed directors in charge of the daily running of the company. Perry is responsible for the naval architecture of the large yachts and ships within the company. He is an all-round naval architect with a special focus on hydrodynamics and performance optimization in the design process. Here, he shares his thoughts on the seeming conflict between speed and fuel economy, and who has the most input into a design’s creation.

MegayachtNews.com: Yur name is synonymous with the design of the Fast Displacement Hull.  How did that come about?

Perry van Oossanen: Our heritage is heavily rooted in hydrodynamics and R&D. Some unexpected tank-test results with a specific hull form made me start to further research the effects of these hull particulars. After a few weeks of intensive computer simulations, this resulted in the FDHF and was quickly picked up by Heesen Yachts, which resulted in the 200-foot, 29-knot Galactica Star.

MegayachtNews.com: Can the designs you are drawing now be improved on in time?

Perry van Ossanen: Yes, of course, the best design still has not been found, and we still improve on every hull we design; however, the steps in improvement are smaller. At this moment, we are working on the next generation of the Fast Displacement Hull, hull forms that offer much more volume or more length for the same or better performance results, which we plan to reveal in short term. In a separate research project, we work on design features that guarantee optimal comfort in waves.

MegayachtNews.com: Is it possible to have high speed and good fuel economy, or is that a dream that will never come true?

Perry van Oossanen: The Fast Displacement already is doing that. While giving the same speed possibilities as a semi-displacement yacht, it has a 20- to 30-percent better fuel economy at lower speeds. The Hull Vane is a hydrofoil that creates an upward lift at the stern of a hull and reduces motions and creates a forward thrust force.

MegayachtNews.com: Who is in the driving seat when it comes to designs. Is it your team that is pushing the boundaries, or is it the owners?

Perry van Oossanen: It would be both, depending on the project. If the owner starts his project with us, we play a key role in the first design concept, as we are able to translate the owner’s wishes, like space, volume, functions, together with the exterior designer’s lines into a concept that fits all the requirements and has high performance levels at the same time.  As for the real innovations, these are usually pushed by us, either in a new design concept or in cooperation with a yard or designer and broker.

MegayachtNews.com: Is the business of yacht design becoming harder now than it was, say, five years ago?

Perry van Oossanen: On an acquisition side, new projects seem to take more effort. However, the market is certainly picking up at this moment, at least for us. On the design side, the yachts themselves are becoming more and more diverse, which for us is very pleasing. Each design is more unique than five years ago, and we only see this increasing.

MegayachtNews.com: If you had not become a famous naval architect, what else might you have done with your life?

Perry van Oossanen: I have a very wide interest in very diverse topics, which also hinders me from going very deep into anything outside of naval architecture, but perhaps meteorology would be something for me… but most of all I am happy with the job I have, knowing that I can do this for another 40 years and never stop learning!