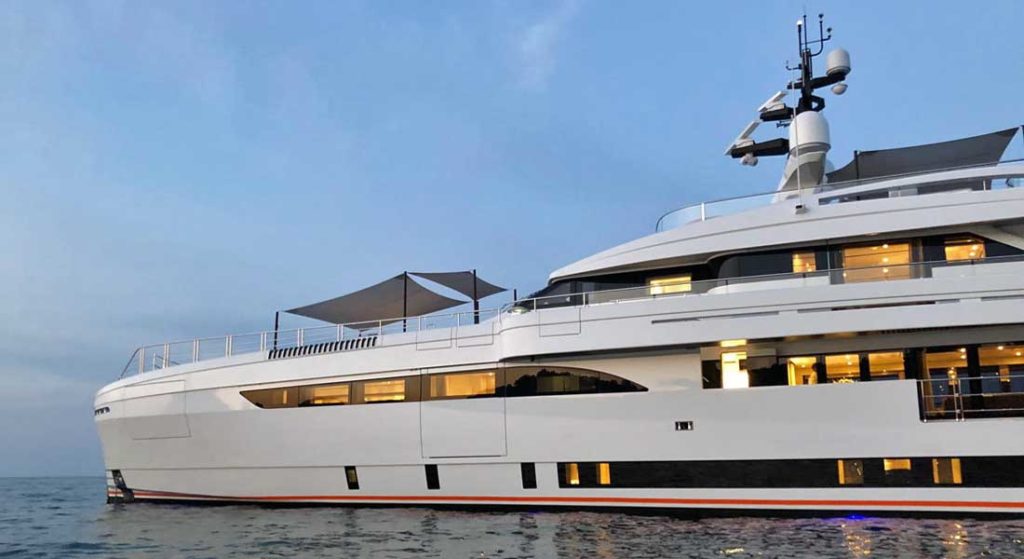 About a month before she makes her international debut at the Monaco Yacht Show, Cecilia is ticking all the boxes for her builder, Wider. With sea trials nearly complete, the shipyard says she’s exceeding expectations in some key ways.

The all-aluminum megayacht, measuring 163’10” (49.98 meters), sprang from the builder’s own ideas, combined with naval architecture and styling by Fulvio di Simoni. They decided to employ diesel-electric propulsion for its efficiency and space savings. For example, a battery bank that works in conjunction with the propulsion system means Cecilia can run on batteries alone at about 5 knots. The batteries can also power air conditioning and other creature comforts at night. Therefore, in both situations, sound and vibration levels are minimal. According to Wider, sea trials have confirmed they’re even lower than anticipated. We requested the figures from the yard and, as of press time, have not yet received them. However, Wider says that RINA, the megayacht’s classification society, is pleasantly surprised.

Regardless, sea trials confirmed a maximum speed of 14.1 knots and most efficient cruising speed at 10 knots. At the latter, Cecilia should enjoy a range of 5,400 nautical miles. Even at her top speed, she should see a healthy 2,200 nautical miles.

The diesel-electric propulsion system further saves room inside, as mentioned above. Cecilia has a tender garage holding a personal submarine. It’s unusual for a megayacht of her size to have such a toy. Wider tested the launch and retrieval system for that sub, too, a U-Boat Worx Super Yacht Sub 3 unit. It can dive to about 984 feet (300 meters).

Other features aboard Cecilia include a helipad (touch and go only) on the foredeck, plus a pool aft. She further has a sauna. With a beam of nearly 28 feet (8.45 meters), the megayacht feels even (pardon the pun) wider, too. This is due to fold-down platforms and floor-to-ceiling glass.