You are here: Home / Yachts / Motoryachts / Audacious Audace Is for Livaboard Luxury—and Adventure 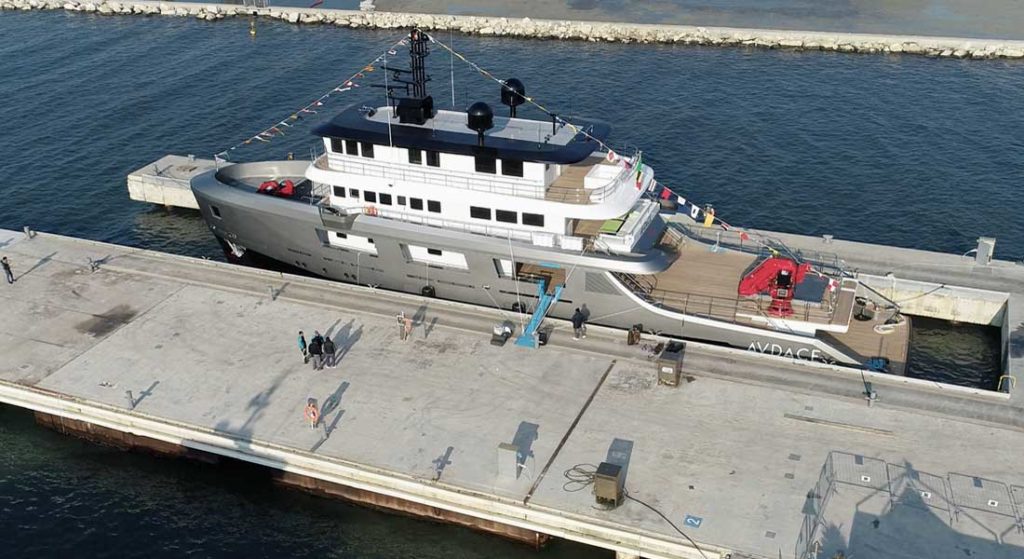 Since its inception eight years ago, Cantiere delle Marche (CdM) has focused exclusively on go-anywhere explorer yachts. Several customers have undertaken adventures as a result. The owner of Audace, though, might have them all beat. Not only does he want to go exploring, but also he plans to live onboard, year-round.

The 140’4” (42.8-meter) megayacht is a fully custom build, a change of pace for CdM. So far its deliveries have each been part of a series, like the Darwin Class or Nauta Air line. Interestingly, Audace is part of what’s called the K Series, the brainchild of the yacht-management, charter, and sales firm Floating Life. Despite “series,” the K Series is indeed custom. Buyers select styling, interior design, mechanical systems, and so forth. The series aspect refers to how the vessels are engineered for rugged, long-range travels. Specific to Audace, she’s a K42, referring to her LOA in meters.

With naval architecture by Studio Sculli and engineering by Hydro Tec, Audace stands five decks tall, including a tank deck. She also carries about 16,379 gallons (62,000 liters) of fuel. Powered by twin Caterpillar engines meeting IMO Tier III requirements, she should see an impressive 5,400-nautical-mile range at 10 knots. The megayacht is quite voluminous, too, at 490 gross tons. Furthermore, Audace should look and feel voluminous, bearing a 30’8” (9.4-meter) beam. 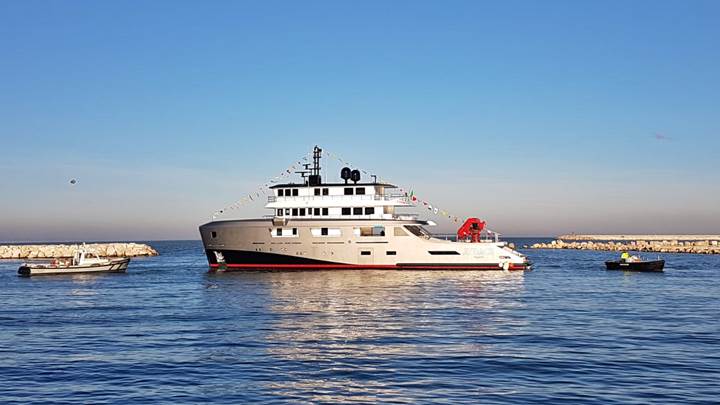 Ennio Cecchini, CdM’s co-founder and CEO, says, “A one-off project was a challenge we were ready to face.” Consider some of what Audace will do. For instance, she totes a waterskiing tender, as well as a BMW motorbike and a Land Rover Defender SUV. These, along with the crew tender, sit one deck beneath a removable, mezzanine-style area stowing PWCs. They’re all launched and retrieved via a big tender crane. “Big” is the operative word, since it has a 2.2-ton capacity. Yet a bigger crane, with a 9-ton capacity, is the hefty red one in the photos here, for the main tender. Given that it measures about 33 feet (10 meters), you get the picture of Audace’s purpose.

Yet another purpose: be ready to party, literally. Areas on both the lower deck and the main deck are akin to dance clubs. Furthermore, the galley is prepared to pump out dishes for up to 250 guests, with two chefs working in concert. For smaller parties, Audace has four guest staterooms, spread over the main and lower decks. The lower-deck cabins have fold-out balconies, too, while the main-deck ones have side-deck access. The owner, meanwhile, has an aerie up on the upper deck, with its own galley and saloon.

As for that owner, he’s Andrea Merloni, the former chairman of the Italian domestic-appliance manufacturer Indesit. Having cruised aboard yachts and megayachts for years, he’s looking to venture beyond the Med and Caribbean. In fact, South America, Panama, and the Suez Canal are all on his itinerary.

While delivery is still several weeks away, Audace has her design and build teams reflecting on what she represents. In the words of Mauro Sculli of Studio Sculli, “The owner’s specific, or should I say audacious, requests made the design and construction processes extremely stimulating.”