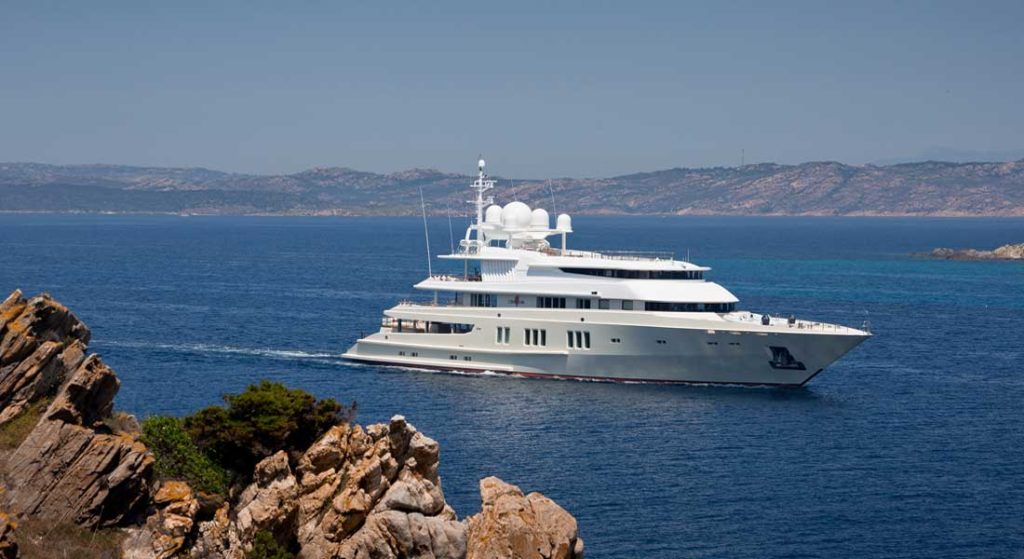 March 28 kicks off the Palm Beach International Boat Show, with more than 1,000 boats and yachts spanning broad size ranges are available for visitors to see and tour. Interestingly, 25 yachts on display are larger than 150 feet (46 meters). Naturally, our attention turns to the biggest of these yachts year after year. Here are the five largest yachts at the Palm Beach show—one of which is not technically in the central show exhibit space, along Flagler Drive in West Palm Beach. Nevertheless, she’s worth a look if you’re in the market for a super-size way to unwind with family and friends.

1. Coral Ocean (above). Twenty-two years after Lürssen launched her in 1994, as Coral Island, this yacht underwent a refit at the same shipyard. Coral Ocean preserves the original handiwork of the late Jon Bannenberg, heralded as a legend throughout yachting. Bannenberg was responsible for the unmistakable styling as well as the interior design, which is akin to a relaxing beach home. Coral Ocean is the largest of the yachts at the Palm Beach Show, coming in at 238 feet (72.55 meters). But, she awaits you at Rybovich’s refit yard, not along Flagler Drive. Get a sneak peek at her accommodations for 12 in our Megayacht News Onboard feature, after her refit.

2. Excellence V. Technically, Coral Island is larger than this lady, who measures 199 feet (60.9 meters). However, Excellence V is the largest yacht within the show confines, situated at Palm Harbor Marina. Fourteen people in the owner’s party have plentiful places to relax and enjoy each other’s company onboard. For instance, Excellence V has a cinema with reclining seats. Three balconies invite you to step out into the fresh air. So, too, does a hot tub with a waterfall. Excellence V, built by Abeking & Rasmussen for an experienced owner, enjoys strong success in charter. 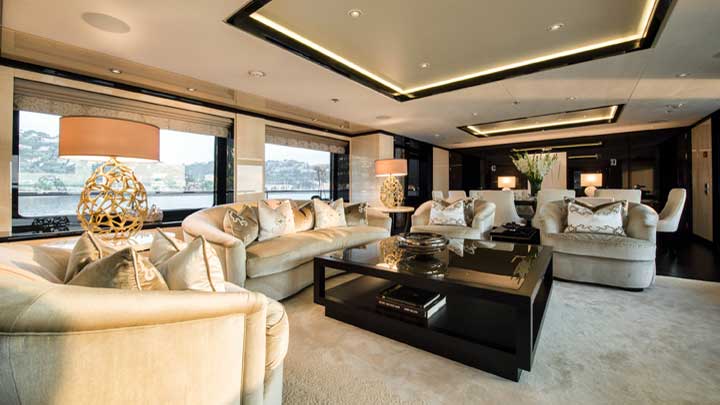 3. Minderella. This 188-footer (57.3-meter) is a three-decade-old classic, from Feadship. She underwent an extensive, nearly $20-million refit from 2015 into 2016. Can’t-miss features from the refit, with designers from Yacht Next, include a piano in her home-like saloon, and a fireplace in the cozy upper lounge. At the show, head to the upper deck to imagine soaking in the hot tub at sunset, while enjoying cocktails.

4. Shadow. Super-adventurous owners are seeking different types of vessels, capable of carrying plentiful toys and tenders. Shadow has served that purpose for her owner since December 2017, when Damen and Amels delivered her. She’s a Damen Yacht Support vessel, marketed by Amels for yacht owners. However, she’s not “just” a shadow boat. This 181-footer (55.3-meter) is certainly a yacht in her own right, too, with three guest staterooms and a saloon. In addition, Shadow has crew’s quarters. She’ll certainly stand out among the yachts at the Palm Beach Show.

5. Elixir. The Amels Limited Editions projects attract customers due to the proven technical platforms and shorter delivery times. Elixir is a good example of the Limited Editions 180 series, from 2016. The owner worked with interior designer Laura Sessa to create an atmosphere replete with creamy colors (above) and pretty details. For instance, you’ll find foliage patterns and mother of pearl, amid marble, glossy dark tones, and a variety of textures.