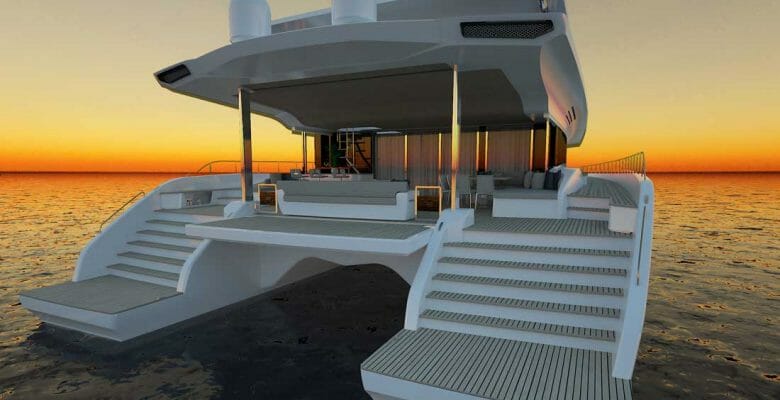 The solar- and electric-powered catamaran pledging silent cruising is apparently catching on. The Silent 80 has garnered four contracts in less than a year as the flagship for newcomer Silent Yachts.

Previously called the Silent 79, the mega catamaran has a new name due to a new, larger LOA. In fact, the megayacht measures just shy of 80 feet. It’s 79’7″ (24.3 meters), versus the originally planned 78’6″ (23.95 meters). Currently in build in Ancona, Italy, the yacht belongs to Neil Murray, the chief technical officer and co-founder of the cloud-services company Mimecast. “My intent is to promote the concept of solar yachting,” he shares. “I want people to see elegance in the concept, not just practicality.”

Part of that elegance comes from styling and interiors by Marco Casali – Too Design. Casali says, “What I tried to achieve is an interesting Italian design, sophisticated and refined. This is a nice-looking yacht that meets efficiency.” In profile, the project is very much a contemporary cruiser. You’ll find customary social areas like seating on the aft deck and foredeck, plus more lounging on the flying bridge. You’ll also see large windows to make the interior (also by Casali) light and bright. When viewed from above, the Silent 80 shows off 70 solar panels. Those panels carry a 25-year warranty and cover 990 square feet (92 square meters). 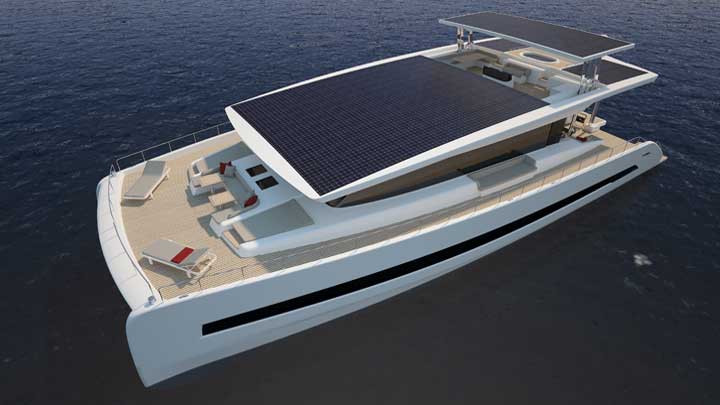 The solar panels feed fumeless electric motors that should further permit silent cruising, between 6 and 12 knots. Obviously, fast travel isn’t the focus. But, you should enjoy the ride. To that point, Silent Yachts says the Silent 80 should achieve 100 nautical miles at 6 to 7 knots. Getting back to the silent-cruising idea, this means you can venture to the next day’s port overnight, without disturbance. Daytime or nighttime, batteries feed an inverter for all hotel loads, too. As a backup to recharge the batteries, the Silent 80 does come with a genset. Your crew would press it into service if, for example, you need higher speeds. They’d alternately tap it if sunrays were scarce over several days.

Silent Yachts offers several interior configurations, further for flexibility. Up to six staterooms are available, for example. Murray has a four-stateroom layout for his yacht, “with two real owner cabins,” Casali says. “The aft master suite has a huge (bed)room, a study, a walk-around closet, and even a sauna.” It’s full beam, too, at nearly 36 feet (10.95 meters). Whatever you choose, you additionally get either double or twin staterooms, and of course crew cabins.

You also benefit from a huge tender garage for a yacht of this size. Because the Silent 80 doesn’t have a traditional engine room, a nearly 15-foot (4.5-meter) tender can stow aboard. Michael Köhler, Silent Yachts’ CEO, even says an amphibious car is possible.

Look for Murray to take delivery of his Silent 80 early next year. The other three contracts should see delivery toward the end of that year.