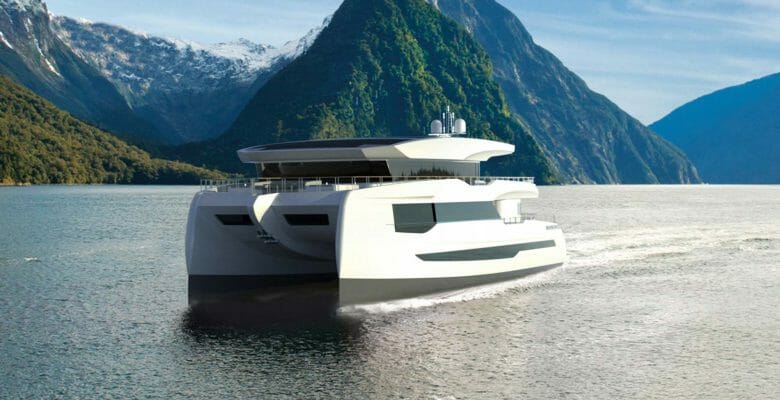 Silent Yachts, which started building solar-powered catamarans about a decade ago, is expanding more into megayachts. It’s signed the first hull of its Silent 100 Explorer, a model it revealed just a month ago.

Silent Yachts got its start under co-founders Michael and Heike Köhler. The avid sailors had cruised all over the world aboard sailboats and traditional motoryachts for decades, when they decided there had to be more efficient propulsion and onboard power methods. From 2004 to 2009, they sailed aboard a prototype solar-powered catamaran and, pleased with the results, created a production line. One such model, the Silent 64, became the first fully solar-powered, production-built cruiser to cross the Atlantic Ocean in January 2018.

Since then, Austria-based Silent Yachts has added new models, including the Silent 80, which has seen three contracts thus far. The builder unveiled the Silent 100 Explorer at the recently concluded Cannes Yachting Festival. Like her smaller sisterships, she has a solar-electric drive train, plus relies on solar energy to power the hotel load. Hardtop-mounted solar panels provide up to 40 kW of peak power, feeding a battery bank with an 800-kWh capacity. The electric motors are 340 kW apiece. Altogether, the propulsion system should allow a top speed from 14 to 16 knots, a cruising speed of 10 knots, and an economical cruise of 6 to 8 knots. Since the solar panels constantly feed the system, Silent Yachts argues that range is never really limited. Of course, if you wish, you can opt for backup auxiliary gensets.

Regardless, the megayacht, measuring 101’7” (31 meters), with a beam of 44’7” (13.62 meters), caters to cruisers’ typical requests. Notably, the hardtop slides open (above) to turn the top deck into a sundeck. The Silent 100 Explorer puts a bar, sunning space, a second helm, and open deck space up here. You can use the open area for a gym, for instance, though the yard further says it can serve touch-and-go helicopter operations, too.

Silent Yachts is collaborating with Marco Casali for the semi-custom megayacht series’ interior design. Four guest staterooms, split between the two hulls, join a main-deck master suite. It’s a healthy 549 square feet (51 square meters) as well, extra sizable thanks to the catamaran configuration. Your captain gets a cabin adjacent to the wheelhouse on the upper deck, while the crew’s quarters, crew mess, and galley are all in the port-side hull. You even can have a tender garage between the hulls, capable of housing a 24’6” (7.5-meter) craft. Smaller toys and the crew tender can side-launch from a hull.

“The kind of available spaces, fully customizable from the clients, will allow unique internal and external spaces not even achievable on much bigger superyachts,” Casali says. He further believes this end of the market is prime for “the solar revolution.” Hull number one will be ready in 2023.