You are here: Home / Yachts / Motoryachts / Voice Ventures From CRN 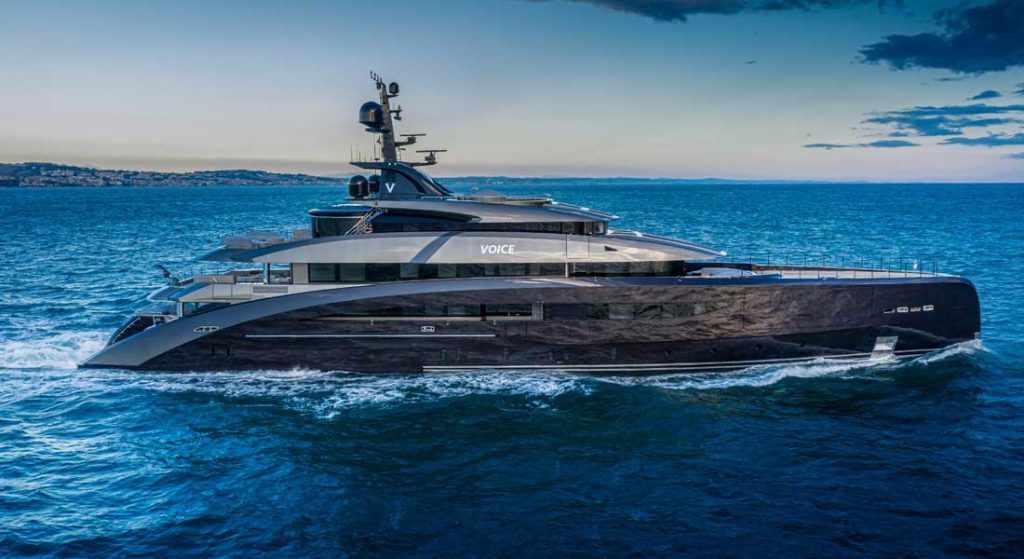 Mediterranean cruising is on the mind of the owner of Voice. Having departed CRN, the 203-footer (62-meter) is spending the waning days of summer in European waters. While there, she should turn several heads, given the unexpected color combinations making up her profile. A smoky quartz tone wraps around her hull, while a silvery sand characterizes her superstructure, along with jet black accents.

Referred to as CRN 137 whle in build, the newly delivered megayacht features styling by Nuvolar-Lenard. Voice has a vertical bow, which both improves interior space utilization and improves seakeeping, according to CRN. The shipyard predicted a 16-knot maximum speed with MTU diesel engines. Of course, she also has transatlantic range. Additionally noteworthy, Voice is the first CRN to receive IMO Tier III certification. This standard requires a 70-percent reduction in nitrogen-oxide emissions.

The above-mentioned vertical bow makes for better space utilization inside, too. In fact, Voice stows her tenders in the bow. Elsewhere, the megayacht has accommodations for 12 people. She reserves the upper deck for her owner, positioning the sleeping space fully aft. Furthermore, the bedroom leads out through sliding doors to an alfresco dining area. Forward, meanwhile, the owner has a personal lounge boasting panoramic views.

He can, of course, invite guests cruising with him to come sit and watch sunsets up here. Ten friends and family can stay in five VIP staterooms below decks. The 37’7” (10.5-meter) beam means this area as well as the main saloon and other lounging areas remain comfortable.

While the owner enjoys his maiden voyage, the shipyard is finishing work on a similar-size yacht. It also has a 197-footer (60-meter) and a 236-footer (72-meter) under construction.