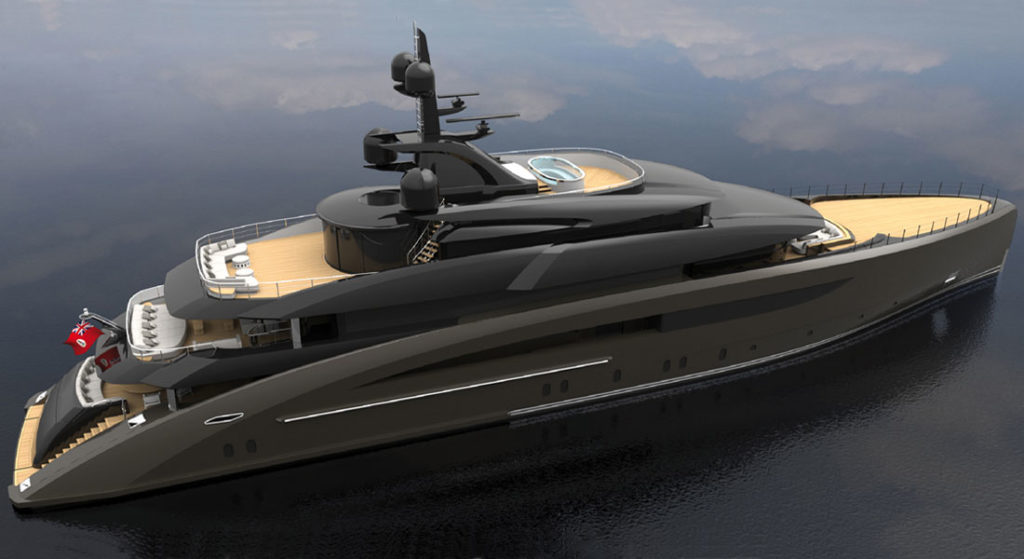 The 203-foot (62-meter) megayacht is currently in build, set for completion in 2019. Construction started last summer. At that time, neither CRN nor the design studio Nuvolari-Lenard, responsible for the interior and exterior styling, would reveal much. In fact, the only detail was the length, although the shipyard did provide an initial profile sketch.

That profile features a vertical bow, for making the most of interior spaces. Tucked just inside here is a pretty unusual place: the tender garage. Other megayachts do sometimes stow tenders and toys forward. But, they’re usually extra toys, with the primary stowage occurring below decks toward the stern. CRN 137 seems to be centralizing all playthings in the bow.

The vertical bow is also in place to improve seakeeping. CRN claims an anticipated top end of 16 knots, under MTU power. Although the builder hasn’t mentioned the expected range, it’s safe to say CRN 137 will be capable of transatlantic crossings, too.

The five-deck-high megayacht boasts a beam of nearly 38 feet (11.5 meters). As you would expect, the owners’ suite makes maximum use of that beam. Actually, we should say, the owners’ deck. The upper deck is devoted entirely to them. The sleeping space sits aft, with sliding doors out to an open-air dining area. Fully forward, the owners get a private saloon, with windows wrapping around to each side. If the owners so want, their guests can come up here and enjoy the views, too.

Speaking of guests, CRN 137 accommodates them in five staterooms. No details are available on whether all are below decks, or if one particularly special stateroom sits on the main deck.

While we await more information, CRN continues work on a few other builds. One of them, CRN 131, awaits delivery in the coming weeks. She’s a 243-footer (74-meter), which will premiere at September’s Monaco Yacht Show.