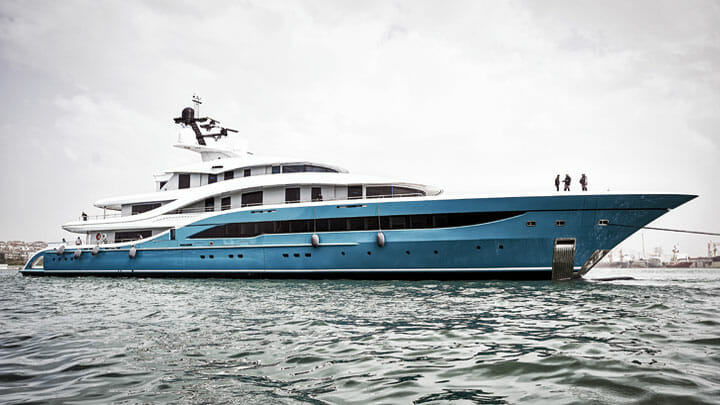 UPDATE, MARCH 3, 2021: According to a report by the Daily Mail newspaper in recent days, eyewitnesses to the superyacht Go collision say she became entangled with equipment from a sailboat, resulting in her rudder locking up and her hitting the dock. However, Simon Johnson, the yacht’s captain, re-affirmed to The Daily Herald newspaper in St. Maarten that a computer malfunction seems to be the culprit. As he was holding the yacht steady near the Simpson Bay Bridge, “the yacht started moving mysteriously forward. There was nothing I seemed to be able to do; all the controls on the bridge were showing normal. I called the engine room, and everything was normal down there. I found I had extremely limited control, almost limited to only the bow thruster, but with now only 50 meters between us and the bridge, I had to make a decision fast.” To avoid colliding with the bridge and running aground on rocks (and thereby risk spilling fuel), “My preferred option was to point the bow towards the yacht club dock, and beach her gently there.”

He continues, “My biggest concern was not to stop the activity of the island, which I am very fond of, by taking out the bridge. I used to live here and have many friendships over the years. The fact that there were no warning alarms, no lights on board to indicate something was wrong was really scary. I know this yacht so well, yet I had 13 seconds to make a decision before hitting the bridge. The decision I made was one I would make again if faced with the same circumstances.”

An investigation is still ongoing. Read on for our original article.

A computer malfunction is reportedly to blame for the superyacht Go losing steering control yesterday, resulting in a collision into the St. Maarten Yacht Club dock. While no one sustained injuries, the dock was destroyed.

The 253-foot (77-meter) Go, pictured from her launch at Turquoise Yachts in 2018, was at the Ile de Sol Marina, which is in proximity to the yacht club. According to The Daily Herald newspaper in St. Maarten, Go was maneuvering to leave the Simpson Bay Lagoon. However, instead of heading out, she veered into the wooden dock. Several eyewitness videos show the bow of the megayacht slowly breaking apart the planks, unable to stop or reverse. No one was standing on the docks at the time, though.

Michele Korteweg, the Sint Maarten Yacht Club general manager, tells the newspaper that it appeared Go suffered an engine failure. Because the yacht damaged some dock leading to an outer concrete dock, she adds, a structural engineer needs to inspect it. “If the piles supporting the structure are still solid and stable, it should be easier to rebuild,” she says. “If that’s not the case, we will have to replace the piles, which could take months. But in the meantime, we will come up with a temporary solution in order to be operational as quick as possible.”

A team from the yacht club has already removed much of the debris. The yacht returned back to the marina following the incident. The yacht club, meanwhile, pledges to keep visitors updated on the dock repair and replacement.

The superyacht Go has accommodations for 16 people and a crew of 20.