Home / Events / Monaco Grand Prix Returns, as Do the Megayachts 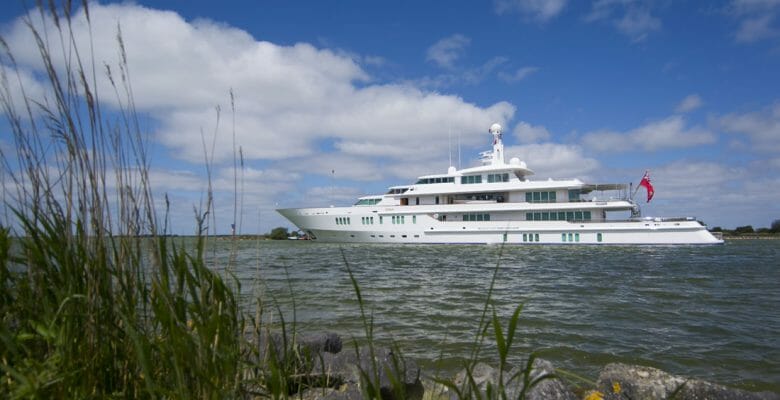 Formula 1 racecars are carving turns alongside Port Hercule as the Monaco Grand Prix returns this weekend. Gandstands have limited spectators due to the ongoing pandemic. However, the megayachts in the harbor are no fewer than expected. Here are several watching the race from the privacy of the water.

Atlantis II. A fixture in the marina day after day, Atlantis II saw delivery in 1981. She’s long rumored to be the result of a rivalry between her original owner, Stavros Niarchos, and the late Aristotle Onassis to see who could build the bigger yacht. Niarchos won with this 380-footer (115.76-meter).

Axioma. A popular 236-foot (72-meter) charter yacht, Axioma (below) has a two-level, atrium-like saloon. Of course, guests will gather outside and wherever TVs are inside for the race. When the Monaco Grand Prix returns yet again in 2022, Axioma may have a support vessel with her.

Cloud 9. This is the first Sanlorenzo 62 Steel, fresh from delivery earlier this year. Expansive alfresco areas are perfect for taking in the racecars as they fly by. A hammam in her beach club, meanwhile, is the way to relax later on.

Faith. This 317-foot (96.55-meter) Feadship made her way across the Atlantic from the Caribbean in time for the summer season, and the race, too. Not coincidentally, her reputed owner has business ties to Formula 1 racing.

Lionheart. One of Port Hercule’s prime viewing spots is occupied by this megayacht. Fun fact: Lionheart was Benetti’s biggest boat when the yard delivered her in 2016. She measures 295 feet (90 meters). Her owner, British clothing magnate Philip Green, has used “lion” in the name of several boats and yachts.

Luminosity. Staying in Monaco for a few days after the race, the 353-footer (107.6-meter) plans to rely on her hybrid electric power rather than gensets for guests to have a sense of quiet and peace (as much as that can be possible with race cars nearby). The 5,844-gross-ton yacht is also for sale.

Over the Rainbow. Painstaking care keeps this 1930s classic looking much the way she did all those decades ago. LOA: 115 feet (35 meters). Take an armchair tour via the video above.

Race. Of all the yachts enjoying the sights as the Monaco Grand Prix returns, one christened Race seems ultimately fitting. One hundred sixty-one feet (50 meters) in length, she has all the famous Riva boat brand hallmarks, including mahogany accents.

Siran. Yet another familiar sight in Port Hercule, this one saw delivery in 1992. LOA: 230 feet (70 meters). Siran (top) was the seventh, and last, Feadship from the drawing boards of the late Jon Bannenberg, featuring his work inside and out.

Zeus. There’s no mistaking the 246-foot (75-meter) Zeus, due to her bulbous-like windows. While Lionheart has a prime viewing spot for the race, this yacht arguably has a better one, for guests who want to feel immersed in the action. She’s stern-to near the racecourse.