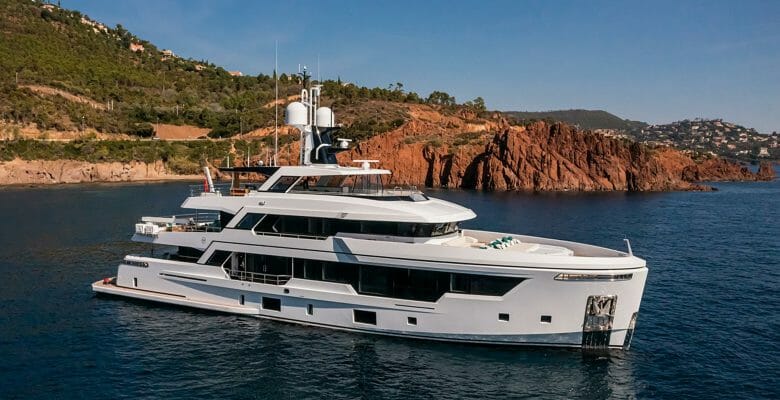 The 40th-annual Palm Beach International Boat Show opens next week, so expect to see everything from inflatables to 300-footers, along with watertoy demonstrations. Notably, megayachts and megayacht exhibitors will spread across two sites. Firstly, they’ll be in the slips and on-land displays they’ve traditionally occupied along Flagler Drive in West Palm Beach. Secondly, select yachts and exhibitors will be at the nearby Rybovich shipyard. Either way, the yachts will be a mix of new deliveries, American debuts, and brokerage buys. These are among the superyachts set to debut at the Palm Beach show.

On display with Allied Marine, EIV (below) is a custom project for American clients. Rossinavi delivered the 160-footer (48.8-meter) in 2020. With a sharp bow and sporty styling, the megayacht employs a fast-displacement hull form for good turns of speed and efficient cruising. Floor-to-ceiling windows along the main deck, meanwhile, brighten the already luminous interior ambience for a party of 10.

One of the largest models thus far from Grand Banks Yachts (below) is making her global debut, not just her Palm Beach show debut. The shipyard conceived the project especially for customers stepping up into superyacht territory for the first time. For perspective, consider that the Grand Banks 85 has three times the volume of the Grand Banks 60. While this is hull number one, with a skylounge, the series is available with an open bridge, too. That same semi-custom approach applies to the interior, where the 22-foot (6.8-meter) beam makes spaces feel roomy.

Not only is Emocean (at top) among the superyachts set to debut in Palm Beach, but also she’s making her North American debut. An explorer yacht, specifically an RSY 38m EXP series project, she belongs to owners who wanted to crisscross oceans. Furthermore, they wanted to “live onboard all year long,” says Ermanno Bellettini, Rosetti’s chairman and CEO. This quite experienced couple had a hand in essentially every aspect of design and construction, too. On yet another note, Emocean has vegan leathers as part of her decor, eschewing animal products.

This Outer Reef may surprise you for being among the superyachts set to debut, since the shipyard specializes in smaller yachts. However, the 900 Motoryacht is the new flagship of its X Class series of traditional-looking trawlers. The owners are returning customers, having owned an Outer Reef 700 and—of course—wanting more room. Additionally, the owners are christening the 900 Motoryacht, as Julianne, during the boat show.

Tickets are on sale exclusively online; no box office will be at the show. Additionally, the show opens at 12 p.m. on March 24th and 10 a.m. the rest of the days.