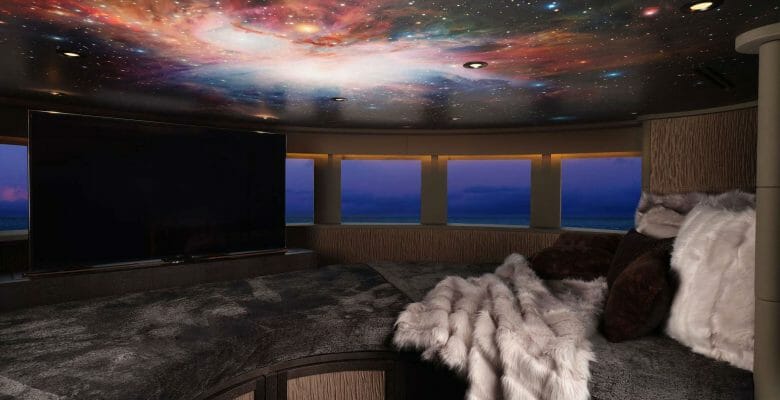 The owners of Galaxy didn’t just want a new look for their megayacht. They wanted an ambience that would transport them to (no pun intended) another galaxy, with thorough changes inside and out. Their 184-foot (56-meter) Benetti underwent a dramatic transformation in a matter of months, too. Call it cosmic chic or spaceman sophisticated, the Galaxy refit, as created by Njord by Bergman Design House, is “on a grander scale than we could ever have imagined,” the owners say.

A refit of this magnitude, which included styling changes, normally would require 18 months. The far-shorter completion schedule was due to the owners wishing to keep using their yacht for entertaining and truly living aboard. To balance their desires with the need to start updating the looks, the Galaxy refit took place in two phases. Phase one, in springtime last year, saw new alfresco seating, interior artwork and rugs, and overall décor enhancements take place. This permitted the owners to spend the summer aboard as they planned to do, further providing Njord with constructive feedback and what did and didn’t suit them.

That feedback steered phase two, which began last September. This part of the Galaxy refit was the most comprehensive, and the most compressed. Just five months later, Monaco Marine and Njord put the last finishing touches onboard. The designers completely reimagined all guest areas from top to bottom. For instance, the main saloon (above) is a daytime yoga studio and nighttime glam entertainment space akin to a private club. Additionally, Monaco Marine installed Galaxy’s new nameplate, redesigned by Njord, plus painted her mast and accent lines black and painted her hull.

Among the owners’ favorite areas following the Galaxy refit is the “snug” in their suite (top). “We climb in there, shut the door, and the world just disappears,” they say. They further adore hosting dance parties in what they call the avatar room, a.k.a. the main saloon. Dylan Cole, a renowned entertainment-industry production designer who’s worked on Avatar and Maleficent, created the full-room wall covering as the owners’ own Pandora. (Pandora is the planet at the center of the action in Avatar.)

Besides creating a private world for the owners, Njord selected all-natural and as many sustainable materials as possible. For example, rock crystals appear in a variety of rooms. Organic fabrics cover the custom furnishings (to Njord’s designs, too). Colored glass, wood soles, and more figure prominently. For sensory appeal underfoot, CNC machines cut wave-like patterns in the wood soles.

“Galaxy is no longer just another white superyacht gracing the ocean along the French Riviera,” asserts Sarah Colbon, co-founder of Njord. “Galaxy is now a destination, a marvel that touches all your body’s senses.”

The owners sum up their excitement this way. “The design exceeded our expectations, and the day we got the ‘keys’ to Galaxy, it became our home and not our yacht because of all the changes that made it ours.”