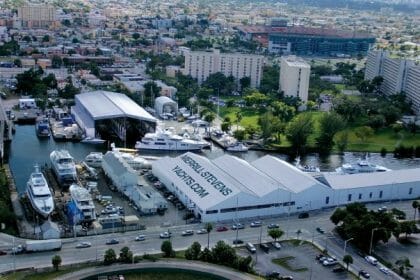 For about two weeks now, I’ve been following developments at the renowned Miami-based Merrill-Stevens, which shut its doors just before Christmas. Some reports state no more employees remain, while other say about 20 security and other back-office personnel are still on site. Conflicting information like this is among the reasons why I held off on writing about the situation. Waiting has proven to be a good thing, as the owner of the yacht-repair yard now says he expects it to survive.

The layoff news was broken by The Triton on December 18, subsequently picked up by a few other marine and non-marine media over the following week. Just within the past few days, however, Hugh Westbrook, chairman of Merrill-Stevens, has told both the South Florida Business Journal and the Herald-Tribune new service that he’ll operate the yard as a storage facility and refit yachts on a project-by-project basis. He also says he still believes the company, operating on the Miami River since 1923, can become a bigger contender in the megayacht market. To make that happen, he reveals he needs investors and $12.5 million, or he’ll have to sell the business. He adds that he’s speaking with investment bankers about options.

When Westbrook purchased Merrill-Stevens in 2004, he announced ambitious plans to expand operations. Sixty million dollars would be spent renovating sheds and dock space for yachts up to 250 feet, from the current 155-foot limit. The funds would also create 300 jobs, plus a river walk and exhibits detailing Merrill-Stevens history. (The yard was founded in 1885 in Jacksonville, Florida.) While awaiting government approvals and permits for all of this, two years later Merrill-Stevens acquired Koch, Newton & Partners. This expanded overall offerings further into yacht sales and management, charter, and crew placement. Unfortunately, in 2008 the yacht management, charter, and crew-placement divisions were eliminated in favor of focusing on the pending expansion.

Westbrook blames Merrill-Stevens’ financial problems on a few things, one being approvals getting mired in red tape. The other: the economy. “We have invested more than $5 million in soft costs,” the South Florida Business Journal quotes him as saying. “Just as we were ready to go, the financing opportunity for a project like this dried up and has not come back.” Westbrook also blames customers, saying some have delayed repairs. He tells the Herald-Tribune news service that the owners of two 150-footers in storage, needing $1 million apiece in repairs, laid off their crews and postponed the work.