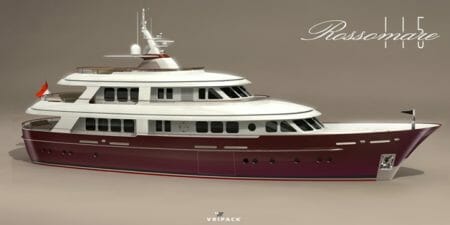 Why would a megayacht owner want his stateroom steps away from the wheelhouse? Not necessarily just for the upper-level views. In the case of the Vripack client who commissioned the Rossomare 115, it’s because he plans to take the helm himself. In fact, the entire yacht is designed around the bridge deck for this very reason.

The Rossomare 115 was conceived because the owner couldn’t find existing yachts or designs that fit his or his family’s needs. Her 35-meter (115-foot) LOA is unusual for an owner-operated megayacht, but not entirely unheard of (to wit, the West Coast of the USA).

Vripack and the owner also refer to the design as a “Family Yacht,” given the intention to cruise frequently with relatives. Two guest staterooms, located near a sauna, plus a VIP will accompany the master stateroom. Six crewmembers will also be accommodated, fully forward on the lower deck. For warm-weather travels, the sundeck will be the popular place, accessible from the lower deck due to a central stairway.

No shipyard is attached to the project at this stage. However, the design brief does call for RINA classification and a round-bilge steel hull. Furthermore, it calls for leisurely, more fuel-efficient speeds under MAN power. Top speed should be 13 knots, with a 10-knot cruise. At cruise, she should see a 4,000-nautical-mile range. As you’d expect, she’ll have plenty of fuel: 43,400 liters, or about 11 465 gallons. She’ll also have sturdy systems for a variety of climates and plentiful backups are specified.

Not everything is as traditional, however. Take the engine room—actually, rooms. That’s right, there are two compartments on the lower deck. One is aft, between the beach club and the two guest cabins. The other is just forward of here. Because of the aft engine room, the toy garage is shifted forward. It’s just aft of the crew cabins.