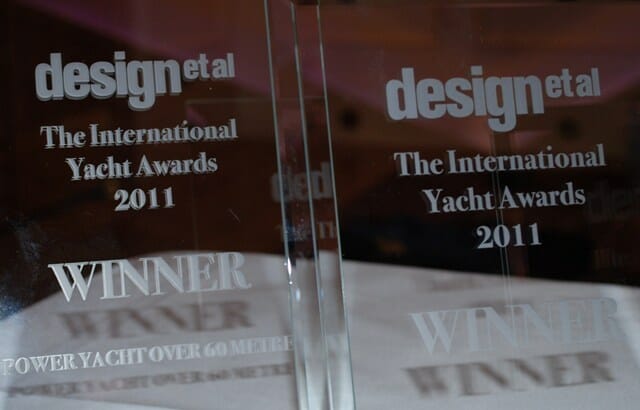 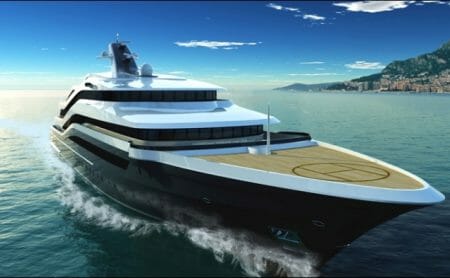 If you live outside of the United States, you may be familiar with design et al magazine. It’s an interior-design magazine covering high-end homes, private planes, and other luxury products, which of course includes megayachts. Each year the magazine hosts the International Design Awards, a series recognizing creativity and talent in hotel design, product design, and yacht design. Unlike some awards, voting is open to professionals, readers (a mix of consumers and industry representatives), and the general public. In addition, specific to the International Yacht Awards, both existing and conceptual designs are eligible. Indeed, the magazine looks for designs that “cross the boundaries,” to quote its website, in terms of interior and exterior motifs.

Last Friday, design et al revealed its International Yacht Awards winners for 2011. Of the 28 finalists in nine categories, the following walked away with the prizes:

Concept Design Under 50 Meters: Curvelle 33×9, submitted by Lila-Lou London. This catamaran gets her name from her LOA and beam: 33 meters (108 feet) by 9 meters (29 feet), respectively. Lila-Lou London skillfully graced the yacht with softer lines than we’re accustomed to seeing on catamarans, thereby avoiding the bulky, boxy look that some suffer from. Lila-Lou London is also responsible for the 33×9’s interior design. Six staterooms will accommodate up to 12 people, including the owner, all on the main deck. All staterooms can be configured 20 different ways, according to Curvelle, the fractional-yacht-ownership firm for which Lila-Lou London created the design. For example, one owner may like the six-stateroom setup, while another may prefer three large suites, featuring a bedroom and a sitting room. The crew can change the layout according to the owners’ wishes just prior to them embarking on a cruise. (Read more here: Curvelle Teams with Lila-Lou.)

Concept Design Over 50 Meters: Orchid, submitted by Luiz de Basto Designs (above). This 88-meter (289-foot) project, designed for Lürssen, accommodates just eight guests, to increase space for saloons, dining areas, alfresco spaces, and other entertainment and relaxation areas. Rather than starting with a set profile, de Basto says the amenities he and the yard wanted to incorporate dictated the height, which is six decks. These amenities include a two-level, 245-square-meter (2,640-square-foot) owner’s suite, spread over the forward part of the main deck and the deck above it. There’s also an indoor pool on the aft main deck, plus an alfresco pool one level up. An elevator takes guests to the tender garage, where fold-down hatches let her launch and guests board and disembark. (Read more here: Orchid, a Luiz de Basto Design for Lürssen.)

Interior Design: Celestial Hope, submitted by Intarya. Hull number two in Heesen Yachts’ 4700 series, Celestial Hope was delivered in 2009. The 47-meter (154-foot) yacht has a similar layout to many yachts in this size range, with four guest staterooms below decks. However, there’s an extra VIP stateroom on the main deck and the owner’s suite up one level, aft of the wheelhouse. The interior that Intarya created is contemporary, highlighted by moor oak flooring, silk carpeting, and tones of white and cream. There’s also metallic finishing to the walls and steps of the central staircase connecting all decks.

Refit/Rebuild/Conversion: Eleanor Allen, submitted by Arredamenti Porto. Eleanor Allen was built by Feadship in 1979 and recently underwent an 18-month interior refit at Genoa-based Arredamenti Porto. The couple who had purchased the 34.4-meter (113-foot) Eleanor Allen in 2009 loved her classic canoe stern but knew the interior was in desperate need of upgrading. The work included renovating all staterooms, accommodating eight people. Now all guests have en suite facilities, and pillars no longer take up other usable space. In addition, the master stateroom now has a raised bed, benefitting from wrap-around views. The most unusual part of the refit, however, was the removal of a garage for a car (yes, a car). Instead of mechanisms ensuring the car, a Mini, could be offloaded and reloaded, Eleanor Allen now has a more suitable lazarette. There’s also space for modern watertoys.

Deck Design: 85-meter VGD, submitted by Van Geest Design (above). This 279-foot concept project has a sleek, low-slung superstructure, for contemporary appeal, but the primary objective is to emphasize outdoor living. It’s best—and most remarkably—achieved at the transom. The entire aft section just above the water is completely open. No enclosed lazarette or beach club formed when a hatch folds down; the image here shows just how novel the approach is. Further emphasis on alfresco enjoyment comes on the sundeck, fitted with traditional sunbathing areas and a hot tub. There’s also seating aft on the bridge deck.

Power Yacht 25-40 Meters: Meya Meya, submitted by H2 Yacht Design. Launched last year, Meya Meya is sleek and even edgy on the outside, while being cool and sophisticated on the inside. Picture a sloping superstructure that hints at her 25-knot top end, with grey-stained woods offset by neutral-tone fabrics inside. Meya Meya goes all out, just as her name states: It translates to “100 percent” in Arabic. Other highlights onboard: two master suites, one on the main deck and the other on the lower deck. Each occupies the full beam, too.

Power Yacht Over 40 Meters: Mystic, submitted by CMB Yachts. When CMB Yachts delivered the 46-meter (151-foot) Mystic last year, she marked not just the yard’s first project, but also the largest all-fiberglass yacht ever built in Turkey. Besides creating accommodations for 10 in the owner’s party and luxury spaces like a theater, the yard did its homework on the engineering side. It collaborated with High Modulus to ensure Mystic received RINA Charter Class Unrestricted notation and an MCA certificate.

Power Yacht Over 60 Meters: Candyscape II, submitted by Candy & Candy. Brothers Nick and Christian Candy, the principals of Candy & Candy, commissioned Candyscape II themselves. The 62-meter (203-foot) superyacht is primarily “a marketing tool, to show our ability to design different spaces, whether it be a yacht, plane, chalet, palace or apartment,” according to an interview Nick gave to The Daily Mail last year. She features an all-glass elevator, a media room with a 103-inch plasma TV, and a circular sunbed that rotates to face the sun. It’s also fitted with misters to keep guests comfortable. A 20-person alfresco dining table is just forward of the sunbed but can transform into an extra sunbathing space should the need arise.