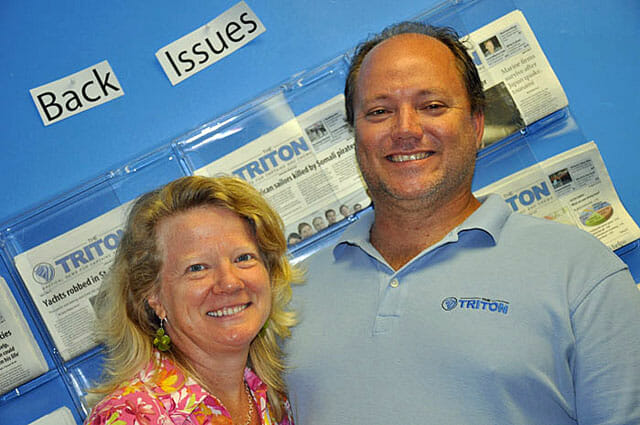 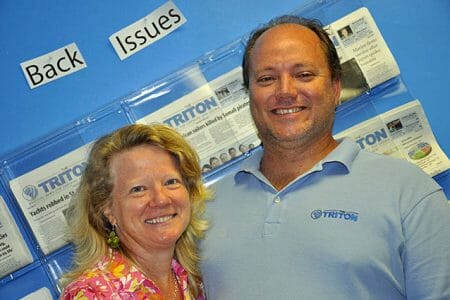 Speak with any yacht captain or crewmember around the world, and you’d be hard-pressed to find someone who doesn’t read The Triton or know its founders, David and Lucy Reed. Megayacht owners and their circles of influence who want to better understand the operational side of a yacht should place The Triton on their must-read list. Why? Established seven years ago, The Triton is a highly respected monthly newspaper covering timely issues affecting these professionals. It also has an active website where captains and crew can discuss and debate the topics of biggest concern to them. While other crew-oriented media exist, The Triton is the only independently owned and operated one. The Reeds and The Triton are ideal for the Megayacht News Leadership Series because they have given–and continue to give–captains and crew a real voice. Equally important, as you’ll learn through this interview, The Triton team also helps these professionals go about their duties in an even more professional way.

Q: Why did you decide to launch a publication targeted to crew?

David: When we talked about the idea for a newspaper for crew in 2004, the industry was exploding and it was a good time to start a business.

Lucy: And there were important stories we wanted to cover. David started his adult life working on yachts and loved it, but he left for a land-based job so he could have a family. There’s something wrong with an industry that forces you to leave to have a life.

David: Lucy’s background in journalism made a newspaper a great fit for us, and the industry needed a serious perspective.

Q: The duties of captains and crew these days are arguably more regulated and complex than they were in years past. Have you found that you’ve had to adapt your coverage accordingly? For example, do you find you research and write more about licensing and training, customs and immigration, etc. now versus then?

Lucy: Not really. I’ve always approached our coverage seriously. Our first issue had a story about advanced notice of arrivals on the front page. After five years covering local politics and five years covering business for major newspapers, I view yacht crew as a profession, like lawyers or doctors. Our coverage takes a mostly serious view of the profession. Yes, I know there are a lot of transients in the industry, and the industry needs them. But I focus on the license holders, the department heads, the decision makers, and I try to provide the kinds of news that can help them in their daily jobs and in their careers.

One of the most important things The Triton does for the real pros in this industry doesn’t even happen on the pages of our newspaper. We host monthly networking events. Any professional in any industry will tell you that it’s the relationships you have that help you advance, and we try to help foster relationships, both on a social level with casual networking events and on a more professional level with our monthly captains lunches and periodic focus groups. It’s not about the free beer; it’s about mingling and talking to new people. It’s about building relationships. We believe it’s important.

Q: On The Triton’s website, you mention that the sea god Triton could calm or rile the seas with his conch horn, and that it’s a good metaphor for The Triton itself. Can you give an example of how your print articles or online forums helped calm captains and crew? Also provide an example of how you’ve spurred discussions that have riled emotions.

David: Just about everything we do does one or the other. Lucy is passionate about good journalism and the stories we print are factual and accurate. She oversees a small army of reporters and columnists who research and write about what’s happening in the industry. A recent front page story looked at the rumors running around town after the Ft. Lauderdale show last year that customs officers were raiding docks and arresting foreign crew. Not true. Just rumors. After Hurricane Wilma, when most of Ft. Lauderdale was without power, we continued to operate and our web site became a central point for information for people all over the world eager for news about the show.

In terms of spurring discussion, the issue-based stories we cover almost always do that. Our captains lunches are always a hotbed for creating conversations and discussions about things the industry usually doesn’t talk about (handling a death on board) and we find crew to tell our stories through (fighting cancer while uninsured). Our crew surveys do this as well.

Q: MLC 2006 is a hot-button issue now. Are the captains and crew among your readers well-informed about the “bill of rights” aspect? What’s the general consensus on how it will impact their lives and careers?

Lucy: Here, I have to disagree. MLC 2006 is a big deal for the commercial shipping industry, but there is a lot of debate about how much of it is applicable to yachting. Large charter yachts will be subject to its terms, but that’s a small sliver of our industry.

I learned this lesson with the advanced notice of arrival protocol. Everyone was freaked out about it, and I wrote stories about what the rules were, but the more and more I talked to captains and government sources, the more clear it became that the ANOA is not so vital and bothersome. A small sliver of yachts were required to comply and the system still had bugs in it. In the past two years, we’ve heard very little about it. Captains can follow whatever rules you throw at them, just so long as they know what the rules are.

Let’s not forget that much of what’s in MLC 2006 already exists. The regulations of hours of work/rest already exist. The one big deal is the space allotment for crew space, and that’s a builder/flag state issue for the most part. And flag states are falling all over themselves trying to figure out a way around it.

It’s important that an industry publication put things in perspective. I’m not yet convinced that my readers — captains and crew — will have to deal with much of this in any serious or career-altering way.

Q: Are there any issues facing captains and crew that you believe aren’t getting enough of their attention? If so, what are they, and why do you think people aren’t as informed as they should be?

David: Each of us has a short-term view of the industry. On the business side, you see second- and third-generation businesses, but you don’t see that with crew. It’s important that people in this industry — people in all parts of this industry, crew included — take their place in being part of the industry. In South Florida especially, yachting is significant in terms of jobs and economic impact. Yet we rarely behave that way as a group. Each of us works for the owner and keeps our head down, happy to fly under the radar. Those days are over.

Captains and crew own houses here, invest here, run businesses here. We are a real industry, investing in the community, in the capital infrastructure that makes South Florida one of the yachting centers of the world.

A captain recently told me about the previous captain on a boat he just took over. That guy wrote in an $80,000 consultancy fee on an engine room refit. That captain is long gone, but the new captain and crew have a hell of a time getting that owner to enjoy yachting again. It’s a wonder he still owns a yacht.

Yacht captains and crew need to see the long-term impact of everything they do. And we don’t.

Q: How about from the perspective of owners and their advisers: What issues pertaining to crew require more of their attention, and why?

Lucy: The number-one issue we hear about from crew is time off, or the lack of it. Owners, generally, are successful businessmen but when they think about their yacht — a multimillion-dollar venture — they get stupid. They micromanage, they think they know how each department should run, they make hiring and firing decisions based on irrelevant criteria, and they think that when they are not there, the crew aren’t doing anything.

David: All they are doing is dooming their own experience. If owners saw their yacht as a business (sure, not a money-making one, but a business just the same), they would let their captains and crew run it, they would arrange for time off and rotations, and they would ultimately enjoy it more.

Lucy: These crew work full time. It’s a job for them, and it’s a shame they have to quit to get some time off.