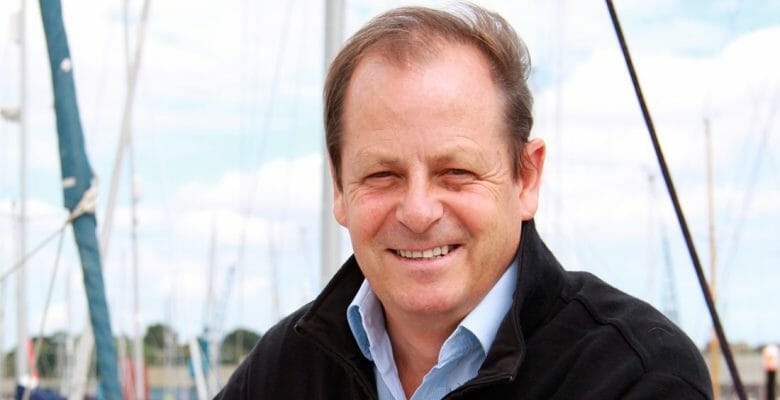 When Oyster Yachts entered the megayacht market in 2010, the yachting industry was suffering the effects of the global economic crisis. That didn’t dissuade the UK builder from expanding its superyacht sailing offerings, which now include the Oyster 825, Oyster 885, Oyster 100, and Oyster 125. With the upcoming Oyster 118, the builder continues to make inroads into this sector, all the while attracting owners who thoroughly enjoy cruising. In this Leadership Series, David Tydeman, CEO of Oyster Yachts, discusses what sets Oyster clients apart, and what inspired the creation of its newest model, the 118.

David Tydeman: I’ve had a mixed career. I’ve been a keen yachtsman since childhood. I’m a naval architect, and I spent the early part of my career in shipbuilding and marine engineering on the North Sea in the oil industry. But throughout all of that, I’ve been a passionate yachtsman. I was rear commodore with the Royal Ocean Racing Club for a while, and I’ve raced offshore for most of my life.

MegayachtNews.com: What drew you to Oyster?

David Tydeman: I knew the founder very well over about a 30-year period. I’d also been involved in private equity, refinancing and restructuring companies in the construction industry over the 10 years or so before Oyster. With bankers having bought Oyster from the founder in 2008, it seemed like a good combination of my skills to try and take the company to the next phase.

MegayachtNews.com: The next phase clearly is the new 118. This also clearly is a size your buyers are interested in, since it grew out of the 115, but what was it about this particular size that made you and Humphreys Yacht Design determine that it was the right way to go?

David Tydeman: One of the new boats I introduced with Rob Humphreys soon after I joined the company in 2009 was the Oyster 885. We made that a six-cabin boat, with four cabins for the owner and two for the crew. It was designed to be one inch under a certification limit, the Large Yacht Code. At 24 meters/80 feet, the code changes. When you look at the impact of that code—as you step up above that code between 80 and 90 feet—you end up having to build a lot more space, for these semi-commercial vessels. To be able to maintain four large cabins for the owner and guests and have two or three cabins for the crew, you can’t fit it in sensibly below about 110 feet. So, we decided that the next step up from the 885 would be somewhere between 110 and 120, driven by the certification boundaries. One-hundred fifteen was the target midway between that range. The first owner of this 118 wanted five cabins at the back and three for his crew, so we just needed an extra three feet. It’s really about providing the necessary room for at least four cabins for the owner and his guests.

MegayachtNews.com: Regulation certainly has an impact on what you will do, but how much do the owners’ requests influence your new models? Do they tend to drive features more than a specific size?

David Tydeman: Across the range, the very determined owner will go build a one-off. If an owner is going to come to a company like Oyster, we’re going to work out the formula that we think is a good, efficient way of delivering a combination of needs. The owner can concentrate mostly on refining the layout, finding a balance of whether he wants four or five cabins at the back end, choosing the fabrics and furniture, and we can engineer a platform for him to then customize. I think Oyster is very good at that across its range, whether it’s our smallest at 47 feet or this new 118. We design the boats very much around the type of sailing our owners like to do.

MegayachtNews.com: Your owners love to cruise. They’re probably a little more active than some other buyers. Is there anything else that you find sets them apart?

David Tydeman: I think it’s a determination to enjoy using the boat, not just buying it to grandstand. We do get some of that element in sailing. These are not performance boats for chasing regatta glory. We design boats very much for a comfortable living space while exploring the ocean. Let me give you one example. Over our last 100 contracts across the range from our small one to our big one, the conversations have taken between two months and nine years to turn the initial conversation into a contract. I think that reflects the fact that somebody is planning a lot of time to go sailing. They’re going to sell their business, then go off for a few years. They need time to be able to enjoy their boat. And we enjoy that process of helping somebody choose the right boat in our range, then enjoy the build process, and then enjoy owning it.

MegayachtNews.com: Let’s get back to the new 118. The press release pointed out that this was a project three years in the making. We in the media and in the industry realize you don’t wake up one day and say, “We’re going to add a new model to our lineup,” and six days later you have that new model set to sell. But, it may be interesting for readers to understand what takes so much time, if you could walk us through the process of how the idea was first formulated and the give and take that occurred. What are some of the most time-consuming elements of the process?

David Tydeman: It’s a whole process of things. If you take the first concept that Rob Humphreys and I sat down with three years ago to the boat on the water, it will actually be six years. The biggest decision really has been that this is something that Oyster will not do on spec. We wouldn’t build the tooling and start the process without a customer. We don’t build boats and then sell them when they’re finished. During the first 18 months, we were designing the hull shape and the layouts, making sure we can engineer all the systems in the right spaces in the hull, doing the composite and structural engineering. The other 18 months was mostly the client deciding whether the timing, deciding to build the boat, suited his lifestyle. He’s also been aiming at what he’s going to do with his family while sailing in 2018 and onwards. There are a lot of factors: the lifestyle of the client, negotiation, and engineering.

MegayachtNews.com: Do you find you get a lot of repeat buyers, or are you attracting people who are new to your brand more and more?

David Tydeman: It’s a mixture across the range. We group the boats into three sections. Up to about 60 feet, the four models we have there are pretty much run by family and friends. They don’t tend to have professional crew. The boats over 80 feet, of which the 118 is the largest, have professional skippers and crew. Then we have two boats in what we call the cross-over zone, where do you do need crew, you can’t socially separate the living space, and you co-habit. What we find is that people will jump from 60 feet up into professionally crewed boats. We get about 30 percent a year moving up from a 55-footer, 60-footer into an 80-footer. That’s adding 20 feet and a bit more luxury, having a professional skipper or chef. With the midrange boats, there’s an interesting pattern: They’re first-time to Oyster. We position the three categories of boats very much with the owner’s use in mind. The midrange tend to be younger owners. Two-thirds of our business is English/American, and expats around the rest of the world.

MegayachtNews.com: With the 118 now being your largest, do you have an eye toward the future in terms of adding perhaps even larger models? If so, do you see a particular size range being the top of what you’d go to?

David Tydeman: I’m very comfortable with 118 being the biggest at the moment. One of the messages I issued to the staff over the last couple of days, at the same time of the press release, is that we remain committed across the entire range. We enjoy running regattas for owners twice a year, one in the Caribbean in April and one in the Mediterranean in September. We ran a circumnavigation with 30 boats that took 15 months, from January 2014 to April 2014. There’s a fleet going around again starting in January 2017. That tends to be the 55-, 60-foot boat with family and friends sailing without crew. That’s an important part of our owner base, and we don’t want to be just seen for bigger boats. We’re going to continue to invest across the range. We’re quite excited we’re going to build a 118-footer. It would be great if we can build three or four of them over the next five years. But we build boats across the range each year, and that’s going to continue to be our focus.