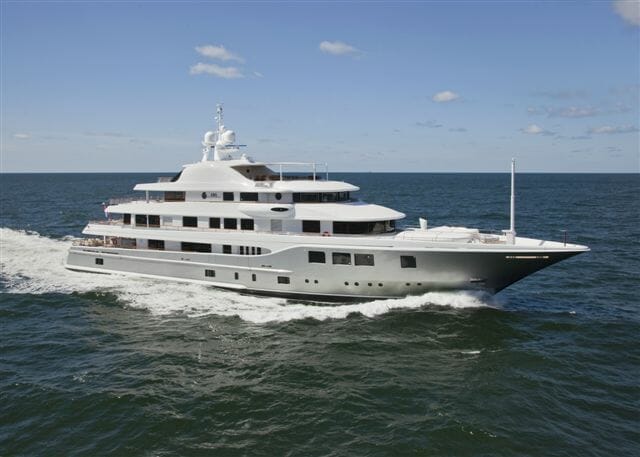 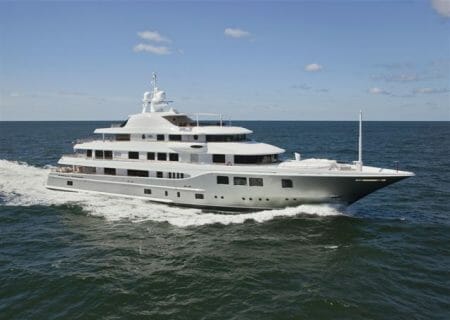 What’s in a megayacht name? Plenty. “Lady” on the transom, followed by a first name, typically honors the owner’s wife. Other megayachts are christened after a favorite place. Since Americans comprise the largest group of megayacht owners worldwide, naturally there are notable USA-oriented names. This edition of the Superyacht 6 showcases some of them, given in alphabetical order.

1. America. This gaff-rigged schooner dates to 1967. She’s a replica of an 1851 build, also named America. Measuring 130 feet (39.6 meters), America was built at the now-defunct Goudy & Stevens, entirely of wood. There’s even more wood, practically everywhere you look, inside, in classic sailing yacht style.

2. Baton Rouge. The largest megayacht on our list, measuring 205 feet (62.5 meters) Baton Rouge (above) is also the largest motoryacht. She was delivered last year by Icon Yachts. Interesting enough, her project name was also American-themed: Florida. A hallmark of her design is the beach club lounge, formed by the fold-down transom. The interior is decidedly light and casual, even beach-y.

3. Georgia. Featuring a cherry-red hull, Georgia was built by Alloy Yachts. The 159-footer (48.45-meter) megayacht was christened at the stroke of midnight in the year 2000. She therefore became the first launch of 2000 as well as the first sailing superyacht of the new millennium.

4. Itasca. Built in 1961, Itasca is a former tug, converted to a private yacht. The owner who ordered the conversion was a well-known American himself: the late William E. Simon, the secretary of the treasury under Presidents Richard Nixon and Gerald Ford. At 176 feet (53.6 meters), Itasca has an impressive profile, mixing rugged good looks with softer, more elegant ones. As for the name, “Itasca” is that of a state park in Wyoming.

5. Janice of Wyoming. Like Georgia, Janice of Wyoming was built by Alloy Yachts. She’s a 131-foot (39.75-meter) sloop, built in 2005. You can’t miss her on the horizon if her sails are up. You’ll see the silhouette of a cowboy on a bucking bronco, both in blue. It’s a nice complement to her flag-blue hull.

6. Virginian. This 204-footer (62.25-meter), built by the Royal Van Lent shipyard of Feadship, has carried the name Virginian for two decades. She was perhaps best-known under the ownership of the late John Kluge, the founder of the Metromedia communications empire. In fact, he and his wife hosted many a charity affair aboard Virginian.