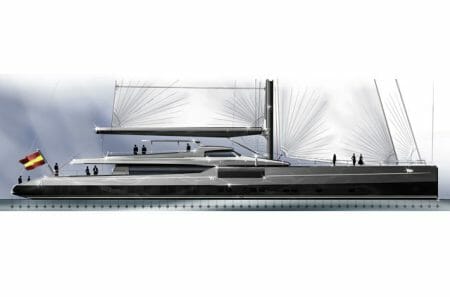 Is she a cruising motorsailer, or a performance motorsailer? She’s may look like the former, but this 170-foot (52-meter) sailing superyacht design, by Barracuda Yacht Design, is definitely performance-oriented.

How so? Try anticipated 14-knot (or better) speeds upwind in 20 knots of breeze, with a heeling angle of less than eight degrees. Barracuda Yacht Design’s director, Iñigo Toledo, feels confident in the prediction. It’s based on the performance of somewhat similar craft he’s penned, with retractable daggerboards, a low-resistance hull, and transferrable water ballast.

The 170-foot Barracuda Yacht Design Performance Motorsailer was designed for a client who wants quiet, vibration-free running. It’s especially important for the megayacht’s additional purpose, entertaining family and friends. To further the enjoyment factor, Barracuda Yacht Design incorporated several large windows in both the hull and superstructure, akin to what the studio did aboard the sailing yacht Akalam, delivered earlier this year by Pendennis. 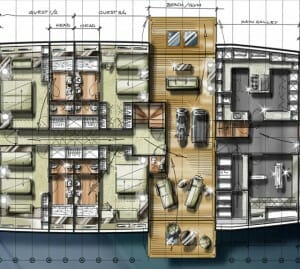 While the 170-foot sailing yacht is not yet under contract at a shipyard, Barracuda Yacht Design anticipates the project being submitted for bid. Once she does start taking shape, she’ll have a few surprises in store. Rather than feature the master suite in its traditional location aft below decks, she showcases it forward and nearly on the same level as the main deck. It also has a fold-down balcony on each side. In the aft position, there’s the VIP stateroom, with direct access to a private swim platform. Guests in the other four cabins aren’t excluded from excellent access to the water, though. As the image here shows, fold-down platforms transform the gym, forward of their accommodations, into a beach club.

A crew of 12 can also be accommodated, though Barracuda Yacht Design says eight should be sufficient for most days. All of their cabins are forward below decks. Crew also have dedicated access to the tender bay (forward of the owner’s suite), plus other working and service areas.