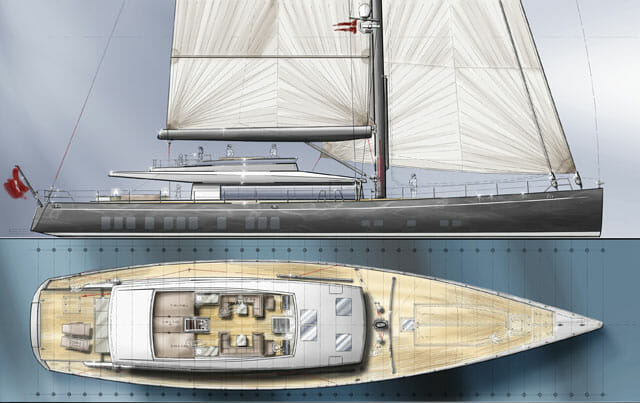 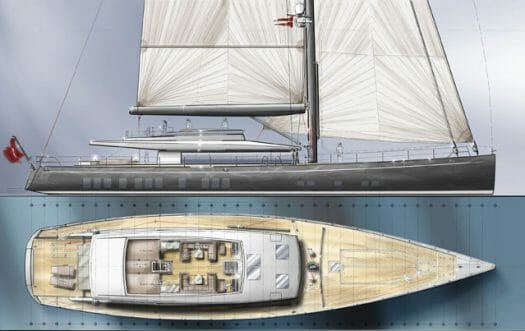 Kingship, which thus far has focused on power yachts and power catamarans, has a sailing-yacht client. The Asian yard commissioned Barracuda Yacht Design to pen this flybridge sailing yacht.

The nearly 120-foot (36.5-meter) yacht is for an experienced owner who prioritizes cruising versus racing. Barracuda Yacht Design proposed a lifting keel, for an extra performance edge when wanted. Just because the yacht won’t race doesn’t mean a sedated pace is planned. The lifting keel makes draft range from 12’5” to 21’3” (3.8 to 6.5 meters, respectively). Along the same performance philosophy, the design studio and Kingship further support the idea of a generous sail plan. Barracuda Yacht Design specified a 7,858-square-foot (730-square-meter) sail plan for the main and genoa. There’s also a self-tacking inner jib.

The owner also prioritizes elbow room inside, while eschewing flamboyance overall. In profile, the Kingship sailing yacht is quite simple, without being simplistic. On deck and inside, a variety of relaxation spaces are in keeping with the cruising concept. For example, the Kingship has nearly 33 feet (10 meters) devoted to the aft deck. It’s complete with a cockpit and separate space for loose lounges. Equally important, the side decks are wide enough for crew to come and go without difficulty, and to reach the work-focused foredeck. On the flying bridge, dining and sunbathing are similarly centered away from sailing controls.

With a beam of 27’2” (8.3 meters), the Kingship sailing yacht has accommodations for eight in the owner’s party aft of the engine room. Both the master suite and VIP are full beam. A central foyer yields access to them and the two additional guest cabins. The foyer is reached via both the aft cockpit and the main saloon and dining area. The latter is an open space that becomes even more open thanks to a sliding wall at the wheelhouse. The owner and guests can chat with the captain and crew (eight total) and learn more about the day’s travels with it open. Closed, it yields all parties more privacy.

The Kingship sailing yacht is apparently still in the proposal stage. No contract or delivery date has been announced.