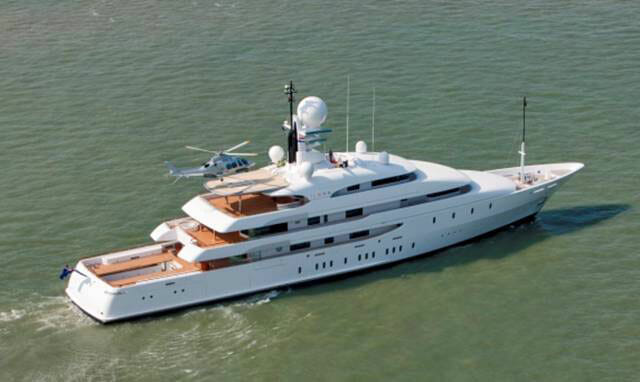 Five years after taking delivery, the owner of the Amels-built megayacht Ilona wanted more. Specifically, he wanted more ways of making his megayacht more enjoyable. An eight-month stay at Amels, which wrapped up last month and which marked the yard’s 37th refit, made it happen. And in the words of Kenan Seginer, her captain, “The boss is very happy.”

The main projects for the 243-foot (74-meter) Ilona were the creation of a swimming pool and a new helipad. The pool is aft, where the former helipad/hangar area was. If you’re familiar with the megayacht, recall that she was built with an innovative helicopter hanger below decks. When needed for use, the helicopter rose to deck level on a platform, while deck hatches opened to reveal her. Those same hatches folded back in place to align with the platform to form a helipad. Since the owner wanted the new pool here, Amels removed the hangar.

It’s not “just” a pool, however. Ilona’s new water retreat measures 33 feet (10.5 meters) long by about 10 feet (3 meters) wide. Furthermore, it has a floor that can rise from its five-foot (1.5-meter) depth after the water is drained to meet the level of the deck. (The pool holds 10,567 gallons, or 40,000 liters, of filtrated and heated sea water, by the way.) This way, the area can handle a large party or other need.

Since the owner has a different helicopter now, he still wanted Ilona to have a helipad. Amels’ in-house team decided to extend the overhang of her uppermost superstructure level. To save time, it was constructed independent of the yacht, then attached. Of course, an extension such as this would make the original profile look unbalanced. Therefore, Redman Whiteley Dixon, which styled Ilona when she was first commissioned, recommended also extending the owner’s deck and the bridge deck. They each gained about six and a half feet (2 meters). To keep the helipad from detracting aesthetically from them, it’s painted grey.

Here’s a look at the test of that helipad.