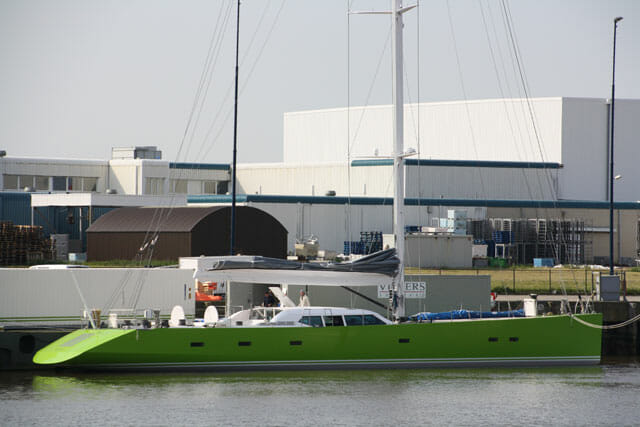 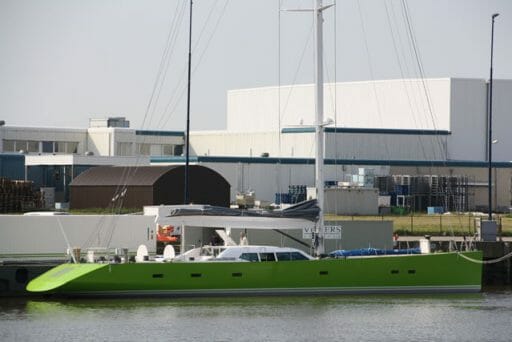 Talk about a lean green machine: Here’s Inouï, seen last week in Harlingen, Holland, where she was being readied for delivery by Vitters Shipyard.

When Vitters announced it was building the Philippe Briand-designed Inouï in 2011, the bright-green color of her hull in renderings took some people by surprise. It was a far cry from the traditional tones of white or blue that grace many a megayacht these days. In person, it’s equally attention-getting. After all, a 108-foot (33-meter) sailing superyacht with a distinct purpose deserves a distinct look, wouldn’t you say? Inouï was commissioned to compete in regattas. She’s first and foremost described as a performance sloop, constructed of carbon fiber and composite. Inouï also has a high roach square mainsail. (For non-sailors among you, essentially this means an extra arc of material on the outside aft edge of the sail, which boosts performance.) And, equally important, Vitters’ in-house team manufactured the megayacht’s hydraulic system to coax the maximum out of winches and cylinders and also allow the gear to suit multiple purposes at the same time. This, in turn, should give Inouï and her crew an edge over competitors, in that they’ll be able to react quicker—though her owner may benefit, too, as he likes to take the wheel himself.

When Inouï is off the racing circuit, her owners intend to cruise aboard as well. She’s fitted with a lifting keel, which will see draft range from 12 to 18 feet (3.8 to 5.4 meters, respectively).  Beam is 23 feet (6.9 meters), and the interior, designed by Andrew Winch Designs, is lightweight. No specifics have been provided on the decor or general arrangement.