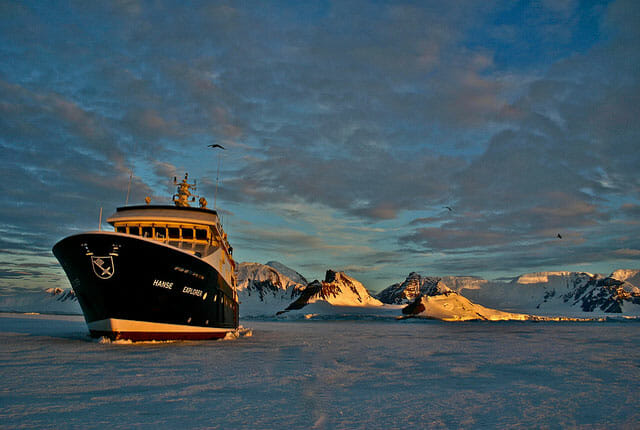 EYOS Expeditions is the go-to source for private cruises and charters in some of the world’s most remote regions. Antarctica, a.k.a. the White Continent, is visited by only a few yachts and megayachts each year and growing in popularity. No wonder: Ben Lyons, CEO of EYOS Expeditions, says Antarctica leaves guests with once-in-a-lifetime memories. However, polar cruising is a world apart from lazing around the Mediterranean. It’s not a matter of simply charting a course. Logistical challenges and potential peril await. That’s why MegayachtNews.com asked Lyons to pen this piece. EYOS Expeditions is a member of the International Association of Antarctic Tour Operators. It organizes permits, creates itineraries, advises on technical modifications for polar operations, and supplies the required ice pilot and expedition staff. In addition, well in advance of departure, EYOS Expeditions staff travel to your yacht to meet and brief your captain and crew. Furthermore, the staff inspects everything from bridge equipment to engine-room machinery, plus the hull and propellers.

Here, Lyons outlines the prep work that EYOS Expeditions undertakes. He also describes the primary cruising grounds. He cautions that “day 1 go here, day 2 go here” itineraries don’t work well for Antarctica. Rather, he and EYOS Expeditions prefer to give general overviews of the different areas, for a sense of what cruising the region is like.

Preparing you and your crew for an Antarctic expedition begins months before your megayacht casts off her lines. Permit applications are time consuming and require a minimum six-month lead time. We at EYOS Expeditions also need your captain to appreciate the potential hazards. Significant ice concentrations present an obvious risk. With large areas charted poorly or not at all, forward sonars are useful. Weather is notoriously challenging, too. The Drake Passage is frequented by ferocious storms. Sparkling blue-sky days can turn into katabatic 70 knot-winds within minutes. That leaves unprepared guests and crew literally out in the cold, with distant rescue facilities.

The EYOS Expeditions team therefore urges captains and owners to take a realistic look at your yacht’s limitations. Many  “explorer” yachts are either inadequate for a true polar adventure or offer a severely compromised experience for the guests. Some equipment will need to change. For example, million-dollar tenders look good in Monaco, but they prove useless in Antarctica. EYOS Expeditions will advise on all of this accordingly. Equally important, your crew needs to prepare for cold-water procedures. They further have to be capable of 24-hour operation due to shifting ice flows. We assist here, too. There is no substitute for years of hard-won experience.

Of course, the expedition teams at EYOS Expeditions do much more than ease your captain’s workload. They add immeasurably to the guest experience: lecturing on the natural history of the region, driving Zodiac cruises, and leading hikes ashore. They come equipped with a mental library of protected landings in case of unfavorable weather. A good expedition team often makes the difference between a memorable experience ashore or being restricted to the yacht.

Antarctica’s season runs from late November to early March. Conditions for wildlife, ice, and daylight hours vary widely and change rapidly. Before deciding when to go, understand the difference between December and February. Also choose a time that maximizes the chances of meeting your expectations. Naturally, your yacht’s capabilities must be considered, too.

Many expeditions start from Ushuaia, Argentina. It’s a rapidly growing harbor, with good services and supplies for the farthest tip of South America. Alternatively, an increasingly popular option is to skip the often-stormy Drake Passage and fly directly to Antarctica. (As part of our service, EYOS Expeditions arranges for private charters on specially equipped aircraft.)

Everyone onboard must accept that any Antarctic itinerary is subject to change. A planned landing may suddenly be impossible due to the wind direction. A morning spent watching 40-ton whales linger just off the bow may throw off the entire schedule, too. Flexibility and a Plan B and C are key.

Day-by-day itineraries are likely unable to be replicated. Therefore, here are the five main cruising grounds in Antarctica.

The South Shetlands. Located north of the Peninsula, they are frequently visited by yachts and commercial expedition ships. The islands make for a good introduction to Antarctica. Guests get their first taste of waddling penguins and languorous seals sunning on the beach. Conditions are typically “Antarctic-y,” with frequent fog, wind, and snow.

Deception Island, a volcanic caldera that yachts can sail into, is particularly popular. Guests can take advantage of “warm” thermal springs for a quick polar plunge (above). A bustling penguin colony with tens of thousands of penguins is nearby. (Difficult surf conditions make the colony landing possible only with highly experienced Zodiac drivers.)

The Weddell Sea. This is possibly the most challenging region on the Antarctic Peninsula. The Weddell is home to massive tabular icebergs over a mile long and a heavy concentration of pack ice and swirling currents. It’s the best chance to see the holy grail of penguins, the Emperor Penguin, for a few weeks each season. Only ice pilots with extensive experience in the Weddell Sea should venture beyond the Antarctic Sound. There’s a real possibility of getting stuck in the ice if conditions change Even cruise passengers on a true icebreaker had their Shackleton moment a few years ago when they became ice-bound for several days!

The Danco Coast. This is generally considered the most scenic part of the Antarctic Peninsula. Towering, snow-capped mountains form an impenetrable coastal wall. EYOS Expeditions staff know where the relatively accessible landing sites are. This make possible watching the comical antics of penguins in a bustling colony (above). Whales can be found in abundance. This is also the most visited region. You’ll find yourself jockeying with the expedition cruise ships for landing sites.

Most vessels try to navigate the Lemaire Channel, a seven-mile-long tapering channel often choked with icebergs. With near vertical mountains stretching to the sky, it earned the  nickname “Kodak Alley” in the pre-digital era. Another popular spot: Port Lockroy, a former British base during WWII now run as a museum and shop by the British Antarctic Heritage Trust. Research stations run by member nations of the Antarctic Treaty are also within this region. EYOS Expeditions can arrange visits—in advance, to avoid disrupting scientific work.

South of the Antarctic Circle. It may be just a dotted line on the globe, but the Antarctic Circle captures guests’ imagination. The sense of isolation and adventure of going off the beaten path is palpable. Dense pack ice often prevents access for all but a short period each season. Detaille Island is a British base that was suddenly abandoned in 1959, leaving behind a hut that is like a time capsule. Telegrams, clothing, technical equipment, and rusting cans of food are still preserved. Farther south, the Gullet is the southern version of the Lemaire, a dramatic, narrow channel that provides the gateway to an interior southern passage.

South Georgia. Located 600 miles to the northeast of the Peninsula, South Georgia has a slightly more temperate climate. It’s a “must see” spot for wildlife and history lovers. (The grave of Sir Ernest Shackleton is a requisite visit.) On South Georgia, hundreds of thousands of King Penguins and 4-ton elephant seals crowd onto beaches. The island is one of the top wilderness experiences in the world. If you decide to venture across the Southern Ocean, you’ll be rewarded with memories that last a lifetime.