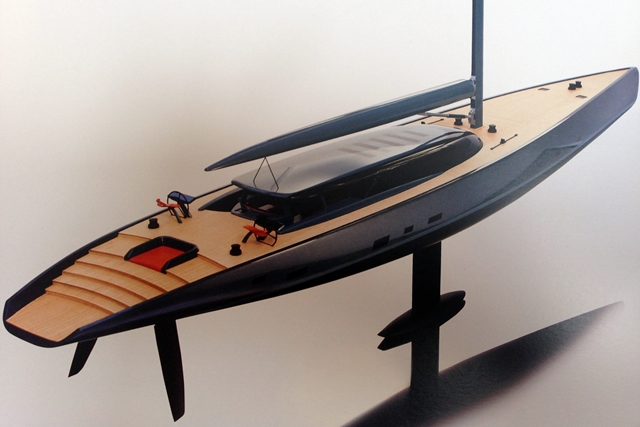 UPDATE, OCTOBER 21, 2015: When christened, this sloop, a.k.a. the Beast, will be named Ngoni. There’s a same-named performance sloop built in 1999 (as Pink Gin) that has cruised the world, so it’s logical to assume they share the same owner.

Read on for the original article.

Yesterday at the Monaco Yacht Show, Royal Huisman unveiled the 58m Dubois sloop. With great fanfare, Alice Huisman of the shipyard and Ed Dubois of Dubois Naval Architects revealed a scale model of the 190-foot (58-meter) high-performance sloop. She’s the project that the shipyard had teased a few weeks ago, revealing that the owner had commented, “Build me a beast. This has to be an edgy and innovative weapon; fast and furious.”

For now, the high-performance yacht is not being named. She is referred to simply as the 58m Dubois sloop, and there’s quite a good story behind her. According to Royal Huisman, the buyer had been in talks with them for about seven years. When he saw a proposal from Dubois Naval Architects that embodied what he want, the talks quickly became a contract. (In fact, the speed at which the owner made his decision took the shipyard by pleasant surprise.) It was a matter of the right look at the right time.

The 58m Dubois sloop has quite a commanding look, practically radical in comparison to recent Royal Huisman yachts. She has a dramatic sheerline and rounded, plumb bow. Perhaps the most striking profile features are the glass superstructure and cascading transom steps. Tank tests on a large scale model of the 58m Dubois sloop are being conducted this month. Ed Dubois says the final hull design will be completed in November. The sail plan will be finalized accordingly, “the most efficient sail plan we can devise for this size of yacht,” he adds.

A few things about the overall design are set in stone, however. For one, the 58m Dubois sloop will have a lifting keel. With the keel up, draft should be 17 feet (5.3 meters); down, it should be 27 feet (8.1 meters). In addition, the carbon fiber mast will be made by Royal Huisman’s sister company, Rondal. It will rise 233 feet (71 meters) high.

As much as the owner wants Royal Huisman to build “a beast,” he also wants a comfortable, welcoming place to relax and entertain. To that end, the 58m Dubois sloop will have two guest staterooms, with the option of turning the gym and study in the owner’s suite into a third cabin. The owner’s suite will have a fun feature, a “viewing hatch,” as the yard calls it, for air and natural light.

Here’s the official reveal ceremony of the 58m Dubois sloop from the yacht show.