You are here: Home / Yachts / Motoryachts / Williamsburg, U.S. Presidential Yacht, May Be Scrapped 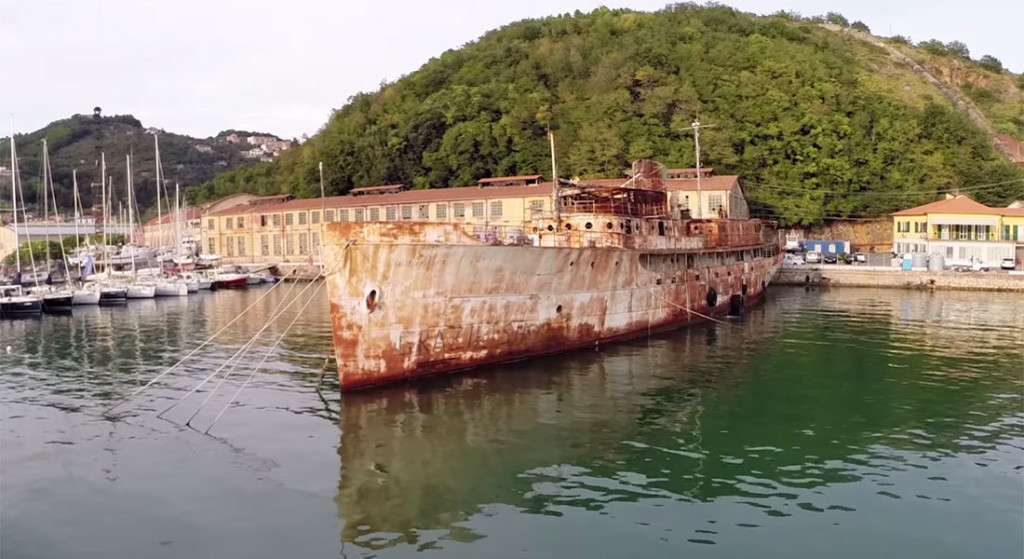 UPDATE, JUNE 8, 2015: Word arrived this morning from David Seal, the broker who has been championing Williamsburg’s cause for the past year, that the yacht sank a few weeks ago. Navalmare has been assessing the situation since then, and while it has yet to release an official statement, Seal believes Williamsburg may be beyond repair. He says her bow is resting on the bottom, and the forward hull section has been damaged. Although most of the superstructure is still above water, he adds, the other damage is significant.

Read on for the original story.

Unless a buyer steps forward, the 84-year-old Williamsburg, rusting away in Italy for 20-plus years, will be scrapped by the yard that has been looking after her. The 243’9” (74.34-meter) Williamsburg is the only non-restored U.S. Presidential yacht, and the last classic yacht overall of her era to remain unrefitted.

The news about Williamsburg comes from David Seal, a broker with Northrop & Johnson who represented the yacht last year via Camper & Nicholsons. Though Camper & Nicholsons continues to holds the central agency, Seal says, “I am still promoting the yacht because I just don’t want to see her scrapped!”

Seal isn’t the only one. Gianfranco Oddone, a retired Italian ship repairman, succeeded in generating global media coverage last year by documenting Williamsburg’s deteriorating condition. We also covered Williamsburg’s plight in 2012 and were contacted by Oddone shortly thereafter. Furthermore, Seal says that the YouTube documentary that he produced about her last year “had more success than any other marketing initiative I have ever tried. A number of highly qualified clients contacted me and asked for more information.” He adds, however, “although we entered into sometimes quite lengthy discussions, nobody took the step of visiting the vessel.” He believes this is partly due to the documentary featuring current footage of Williamsburg. “It gave a very good overview of the yacht in her current state, so that a visit was almost unnecessary.”

That state is shown in the photos included here. Enormous amounts of rust cover the hull and superstructure. The Italian yard where Williamsburg has been sitting for more than 20 years, Navalmare, pumps water out of her hull regularly. Seal says the expense of the ongoing upkeep has become too much for Navalmare’s tastes.

Even with the rust and dreadful appearance, Williamsburg actually can be saved, “providing the offer is above the value of the scrap metal she shall be cut into,” Seal states. The estimated refit cost is $55.5 million. Seal says this would allow Williamsburg to look much like a 1930s-era yacht, though not exactly as she did when launched back then. As for Navalmare, it has recent experience in yacht construction, handling all metalwork for two VSY megayacht projects.

The history behind Williamsburg to this point makes her a compelling story worth a happy ending. She was launched in 1930 at Bath Iron Works in Maine as Aras for Hugh Chisholm, a paper and railroad magnate. Aras (“Sara” spelled backwards) was the third same-named yacht he’d built. He and his family cruised aboard every summer until World War II. Like many yachts then, Aras was acquired by the U.S. Navy in 1941 and converted into a gunboat. The renamed Williamsburg departed U.S. waters for her first tour of duty on December 6, 1941—coincidentally, the day before the Pearl Harbor attack. Through June 1945, Williamsburg saw service mostly in Iceland. When Japan surrendered, Williamsburg was converted back into a yacht and headed to Washington, D.C. to replace the Presidential yacht Potomac. 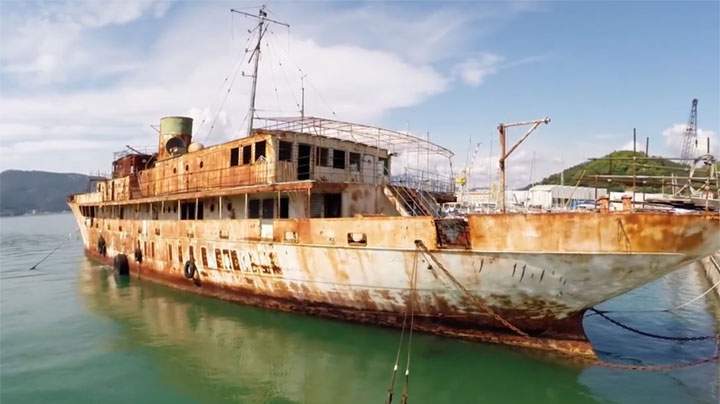 Williamsburg served Presidents Harry S. Truman and Dwight D. Eisenhower, though President Truman cruised aboard and entertained fellow dignitaries far more frequently. President Eisenhower decommissioned Williamsburg in 1953, and she was given to the Potomac River Naval Command for continued maintenance. The National Science Foundation acquired her in 1962, converting her into an oceanographic research vessel. This required removing the Presidential staterooms and other luxury touches. The re-christened Anton Bruun served scientists and researchers alike until 1968.

Later that same year, while she was undergoing repairs in a floating drydock, the platform supporting her suddenly sank. She was a total loss, so the U.S. government auctioned her. A company in New Jersey purchased her, using her as a restaurant for a few years. In 1979 a Washington, D.C. company bought her for the same purpose in the nation’s capital. Plans fell through, however, and Williamsburg was abandoned.

In 1985, a group knowledgeable about her history formed the USS Williamsburg Preservation Society. The goal was to publicize Williamsburg’s plight and find a buyer. The group did not acquire her itself, despite what some reports have stated. (On a related note, it’s part of the non-profit Historic Naval Ships Association and remains information-focused to this day.) Seven years later, the USS Williamsburg Corporation stepped forward, pledging to fund a $65-million restoration of Williamsburg as a boutique charter yacht. The corporation tapped Valdettaro Shipyard in La Spezia to do the work, so Williamsburg headed to Europe in 1994.

What happened next sounds like something out of a crime novel. The shipyard owner vanished, with the money. So says Kim Nielsen, the U.S. Navy’s Presidential yacht historian, and who had been the project manager for the USS Williamsburg Corporation’s planned restoration. The yard soon couldn’t make its regularly occurring payments. Therefore, Valdettaro Shipyard and everything in it, including Williamsburg, were placed in receivership. The corporation didn’t have enough funds to continue, and neither did the yard’s craftspeople. Williamsburg was sold to Navalmare, a shipyard across the bay.

She has sat there ever since, despite being listed with another brokerage house well before Camper & Nicholsons. Our own research from seven years ago reveals little marketing took place under that previous brokerage’s central agency.

Despite Navalmare and potential buyers recognizing her historical value, Williamsburg may not have hope. We asked David Seal whether this was a case of emotion being unable to overrule logic. He comments, “Most of those who enquired certainly had deep enough pockets to pay for a restoration, and some even had experience in large refits. I am pretty sure that the reason nobody was prepared to commit was simply that the Williamsburg presents too many unnknown factors. She has not been lifted for over 20 years, so nobody really knows what state the hull is in and how much it will take to repair it. The superstructure is made of steel and would need completely replacing with aluminum, and the engines may or may not be in a condition to be repaired. What, from my perspective, offers an opportunity for a rich and fascinating adventure of refitting a significant piece of American history, for others is a scary jump into the unknown.”