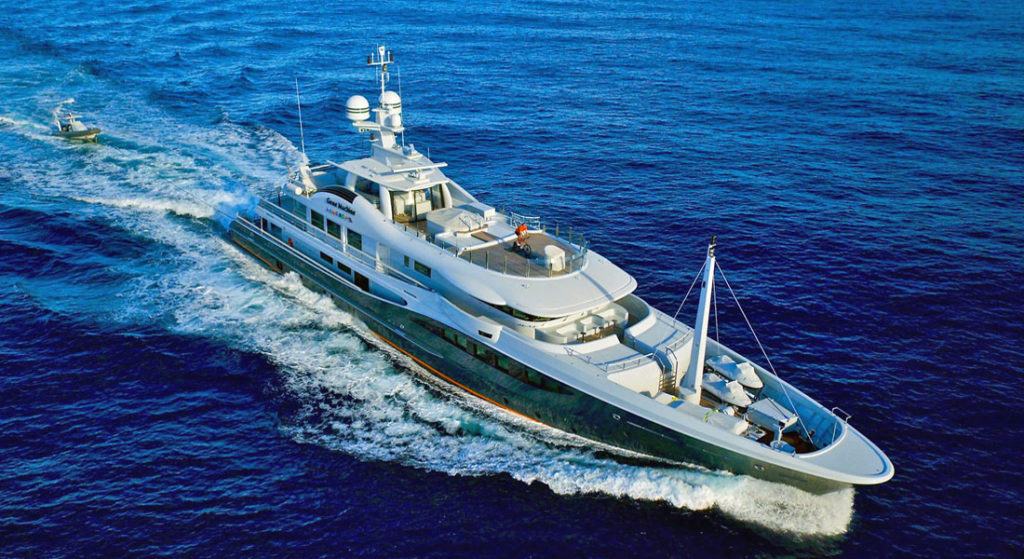 See the red-shirt-clad person on the upper deck? Though hard to tell, that’s a bicycle they’re atop. This is Gene Machine, and this is the crew’s way of keep pace with the yacht as she makes a transatlantic journey. More to the point, it’s the crew’s way of raising £20,000 (about $25,400) for two health-related charities.

Gene Machine, an Amels 180 delivered in 2013, departed from The Netherlands 12 days ago. She, Capt. Fraser Gow, and the 11 crewmembers should arrive in St. Maarten, their final destination, in about five days. That’s a distance of 4,736 nautical miles, which is roughly 5,450 statute miles.

The crew isn’t just striving to match the mileage, though. They’re matching the megayacht’s speed as much as possible, too. Gene Machine can cruise at 13 knots, so that and the distance equate to a required average bike speed of 13.4 mph. Everyone takes turns over each 24-hour period as well. They’re able to more accurately measure their pedaling speed and distance due to using a Wattbike. It’s an indoor bike meant to replicate the feel of the road, plus capture about 40 different data points.

Capt. Gow tells CNN, “At first everyone laughed it off as being impossible.” It wasn’t, of course, though no one kidded him- or herself that it would be easy. The full crew has remained game, too, despite some uncooperative seas and weather. “A few of the crew have had to ride with a bucket in close proximity!” Capt. Gow admits. That surely has caused the crew to fall a bit behind the megayacht in terms of her mileage. But, on days where calm seas occur, they pedal hard to close the gap.

Gene Machine is raising money for two charities, thanks to the suggestion of one crewmember. She’s Hannah Wallner, a stewardess, whose father died of a heart attack. When she suggested the transatlantic cycling challenge, she wanted to do so in his memory. The crew pulled together to raise money for The Heart Research Institute, based in her native Australia. They also chose Ducks & Drakes Cancer Trust, which assists young bowel-cancer patients and their families.

You can follow Gene Machine’s travels via its AIS signal. You can also keep up with the crew’s posts on their charitable Facebook page. And, of course, you can donate directly on the Gene Machine donation page. As of this writing, the crew have raised about £6,100.