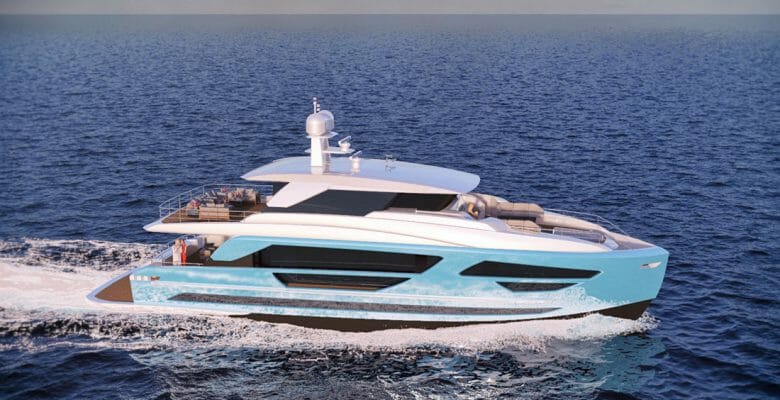 Two years ago, the Fox family (below) took delivery of their first yacht. They thought their orientation captain was crazy for calling the 50-footer “a nice starter boat.” Even crazier, he bet them $100 they’d step up in size within two years. Over that period, the Foxes cruised hundreds of miles throughout the United States and the Bahamas. Then, a funny thing happened. With more adventures in mind, dad Travis and mom Tina realized a larger yacht made sense. 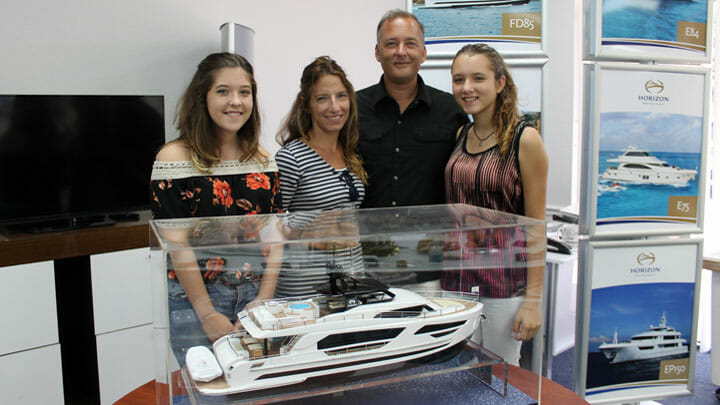 They therefore set out to find the right fit. They liked the work of Cor D. Rover Design, and were delighted to see his styling for the Horizon FD85 at the recent Fort Lauderdale show. The Foxes’ feedback, plus feedback from other customers, led the design and build team to develop an FD87. This past December 20th—two years to the day of the 50-footer’s delivery—they signed the deal for the first FD87 Skyline.

Horizon Yachts uses “Skyline” in the model name in honor of the Foxes. While the Foxes liked the FD85, they wanted an enclosed skylounge. (The FD85 has a raised pilothouse and open bridge.) This would permit cruising in cooler climes. When Cor D. Rover himself and Horizon’s team presented the revised design, they loved it. John Lu, Horizon’s CEO, also loved it. He therefore asked the Foxes if the builder could turn their Skyline concept into a series.

Besides having a skylounge, the FD87 Skyline has other design departures. She features a Portuguese bridge, leading to a bow seating area. Furthermore, a beach club down below pushed LOA for the FD87 Skyline to 90’1”. Perhaps of most importance, the yacht has what Horizon calls a High Performance Piercing Bow (below). Being added to the FD85, too, it should permit better efficiency at shower speeds. It should also boost performance at higher ones. The FD87 Skyline is expected to see a nearly 2,000-nautical-mile range at 9 knots. Twin Caterpillar C18s and nearly 3,500 gallons of fuel will aid in that regard. 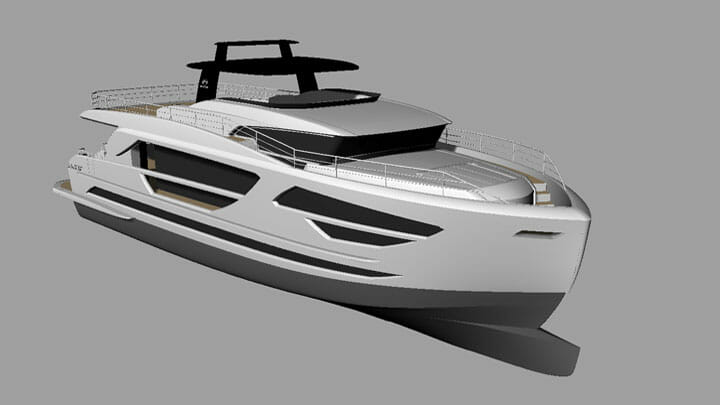 Similar to the FD85, however, the FD87 Skyline has a 23’3” beam. She also has a main-deck master and four guest staterooms, plus two crew cabins. The original design’s floor-to-ceiling windows remain, too.

The Foxes take delivery of their blue-hulled FD87 Skyline later this year. (And, in case you’re wondering, Travis Fox already settled up the bet with the captain.)