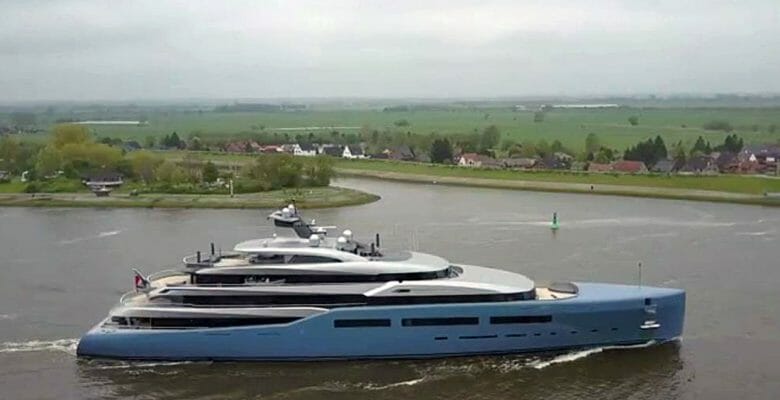 With three blasts of her horns, Aviva said goodbye to Abeking & Rasmussen this weekend and hello to her maiden voyage.

The 321-footer (98-meter) saluted her builder as she departed on Saturday. (You can hear the horns about halfway through the video embedded below.) Despite murky skies, her striking blue hull and styling by Reymond Langton Design stood out.

The largest megayacht in Abeking & Rasmussen’s history, Aviva became a historic launch in all of yachting when she hit the water in January. She became the first megayacht to launch in 2017. Furthermore, she was the first among the top 10 largest launches expected this year to officially debut.

Aviva is a step up in size for her owner, British businessman and investor Joe Lewis. She’s also the second megayacht he’s commissioned from Abeking & Rasmussen. (While the shipyard has never revealed he is a customer, Lewis himself has publicly discussed it over the years.) Lewis still owns his previous Abeking, also christened Aviva. She measures 223 feet (68 meters) and is currently on the opposite side of the Atlantic. In fact, originally built in 2007, she took on refit work at Thunderbolt Marine in Savannah, Georgia earlier this year.

The few facts known so far about the newest Aviva include details on her hybrid propulsion system. Abeking & Rasmussen says under electric power alone, the yacht can see an 11-knot speed. With the full system engaged, she should see a maximum speed around 20 knots. In addition, due to a hull design meant to make her more efficient, Aviva has a lower-horsepower propulsion system than traditionally employed. The hull design reportedly permits 20 percent less drag.

As for interior design highlights, Lewis has a paddle tennis court at his disposal. It’s regulation size, too, measuring approximately 66 by 33 feet (20 by 10 meters). In case a serve goes errant, it reaches about 20 feet (6.1 meters) in height, too.

According to publicly available AIS data, Aviva is en route to Gibraltar, set for arrival this week.